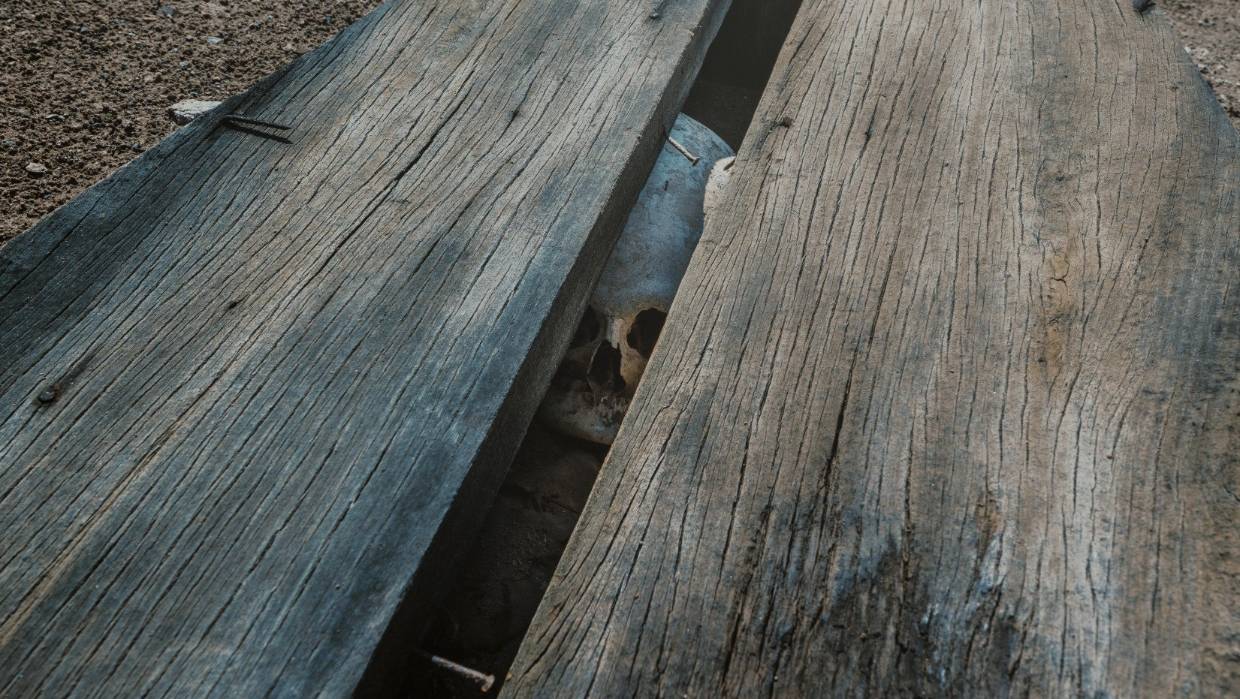 In the north of Chile, in the dry Atacama Desert, you can find the mining towns Humberstone and La Noria. They were founded because saltpeter was discovered in the desert and soon more of these so-called “nitrate towns” were built. But the fairytale didn’t last long, and the towns were abandoned. But that doesn’t mean they’re empty.

The history of Humberstone

Saltpeter is a raw material which can be used to create fertilizer. This element was very important in the late 19th century. When it was found in the dry Atacama Desert, mining towns started popping up very fast. Like Humberstone, which was founded in 1872. At its peak, 3000 people worked and lived on site. Things were going well but working at the mines was tough. The hard labor and the hot sun made the working conditions extremely hard and when a man got a job here, his whole family had to join in, even his children. In 1960, Humberstone was abandoned and left to decay for decades. But, in 2005, it was declared an UNESCO World Heritage Site.

The history of La Noria

La Noria is even older than Humberstone for it was founded in 1826. It is the oldest saltpeter mine in Chile. Many people worked and lived here and there was even a railway line connecting the town to Iquique. When saltpeter started to become an important export product, more mining towns were founded. La Noria did suffer from the competition, but a fire nearly completely bankrupted the town in 1901. The final blow was given when synthetic saltpeter was discovered in Germany during WWII and the city was abandoned.

Both towns are real ghost towns today. Humberstone may be a museum during the day, but at night, the former residents who never left roam the grounds. La Noria is even more creepy and desolate. Especially the huge cemetery makes visitors feel very uncomfortable. But are both towns haunted? The answer is yes!

Humberstone even had its own theatre. But since the town has been abandoned, it’s no longer a place of amusement. A very fast-moving shadow figure has been reported here by several people. Perhaps this is the ghost of a performer who had his last show decades ago?

The most haunted place in Humberstone is said to be the school. Even after all these years, all furniture is there, as if school went out yesterday, ready to receive the children back again tomorrow. People claim to have seen child apparitions and faces of children looking at them from the windows. If that isn’t creepy enough, sounds of laughing and playing children are heard. And footsteps, when no one is around.

People from surrounding towns such as Iquique, refuse to go to La Noria at night. When asked what they fear the most they’ll answer: “the zombies”. And that all has to do with the eerie cemetery.

La Noria has a huge cemetery, which is left to decay. The wooden crosses at the cemetery are all higgledy-piggledy and the dry air, hard wind and the hot sun afflicted some of the graves so much that the bones of the deceased are out in the open. The open graves may have also been the work of grave robbers, but the people from the neighboring towns claim to have seen figures rise from the graves who walk towards Humberstone at night. They are convinced of the fact the “zombies” opened their own graves.

What makes La Noria even more creepy, is the 6 inch (15 cm) tall humanlike skeleton which was found in 2003. The skeleton is named the Atacama Alien, but DNA research proves it is de corpse of a human child. But this child would have had the worst case of dwarfism ever recorded. If this is caused by the winning of saltpeter is unknown, but it still is creepy.

Other ghosts of La Noria

Full body apparitions and shadow figures have been seen walking the La Noria grounds. Claims of people hearing footsteps, voices and screams are also common here. Perhaps it’s the eerie atmosphere that makes people hear and see things, but there is a possibility the enslaved mine workers never left.

You can visit Humbestone as it’s a museum today. For a few dollars you can spend as much time here as you’d like. Visiting La Noria is a different story. It’s much harder to access, even though it seems entirely open. There’s only one real way to get there for lots of roads towards it are blocked. You need a pretty good car or a good pair of legs. Beware of the fact that this is still a harsh desert, so make sure to take plenty of water with you. Because you wouldn’t want to get stuck here forever, would you?

A special thank you to Jakub Kyncl for allowing me to use some of his photographs!

Do you want to read more stories of haunted houses in Middle- and South America? Click here!