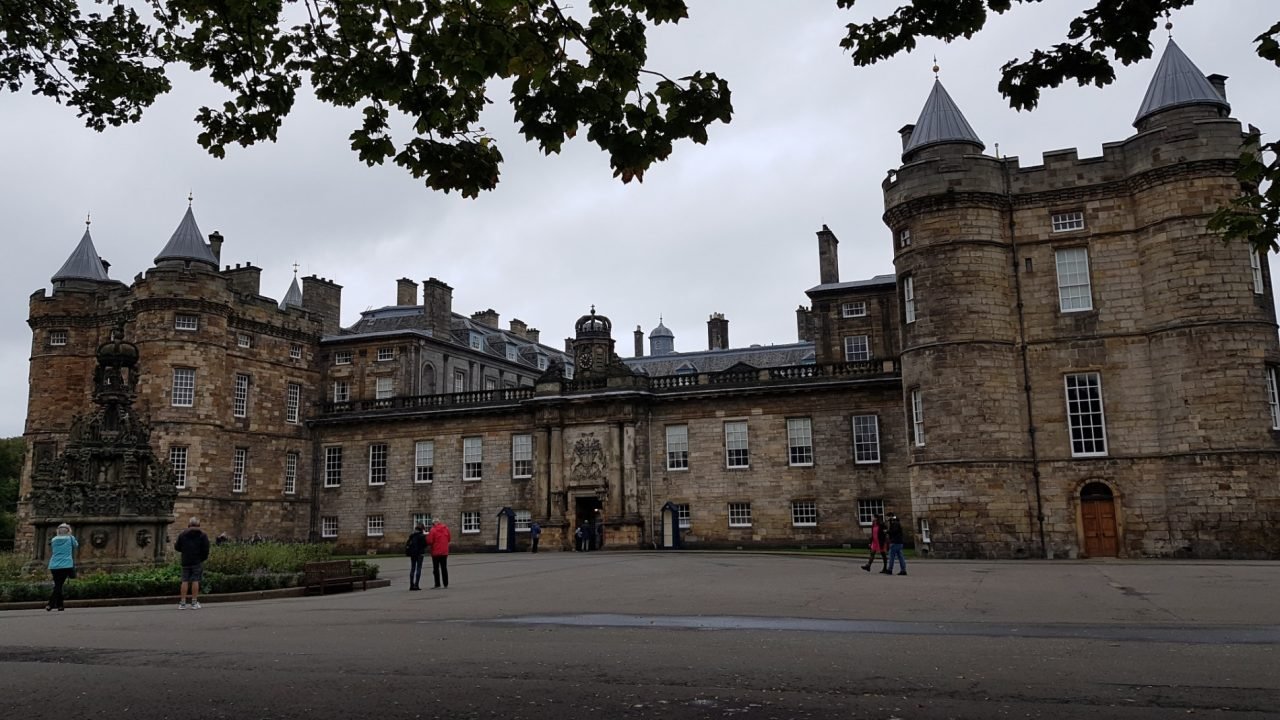 In Scottish Edinburgh, at the opposite end of Edinburgh Castle on the Royal Mile, you’ll find a beautiful palace named the Palace of Holyroodhouse, also known as Holyrood Palace. This is the official Royal residence in Edinburgh for the late English Queen Elizabeth and its the home of Scottish Royal History. And it’s quite an interesting place.

The History of Holyrood Palace and Holyrood abbey

Before there even was a palace, there was an abbey. The abbey was built in 1128 by King David I. He called the abbey the Augustinian Holyrood abbey after the relic of the True Cross, known as the Holy Rood or Black Rood, which had belonged to his mother, Queen Margaret. In 1326, Robert de Bruce held a parliament at the abbey. It wasn’t for long, namely in 1329, that plans were made to turn it into a royal residence.

King James IV constructed a gothic palace adjacent to the abbey from 1501 to 1505. During the 1544 War of the Rough Wooing, a war between Scotland and England, as well as in 1547, the abbey was partly ruined by fire. In 1559, the altars were destroyed. In 1768, the roof of the abbey collapsed, leaving it the way it is today. And the palace itself had seen its fair share of happenings.

In 1561, the palace was inhabited by Mary, Queen of Scots. Mary came to live in Holyrood Palace after her first husband, Francis, the Dauphin of France, had passed away. Mary claimed the Scottish thrown and lived at the palace from 1561 to 1567. In 1565, she married Henry Stuart, also known as Lord Darnley. They had a child together (James VI of Scotland), but the marriage wasn’t a happy one. Lord Darnley was a jealous man and was convinced of the fact that his wife had an affair with her personal secretary, David Rizzio.

On March 9, 1566, Lord Darnley and several nobles used the passageway from his room to the Queen’s quarters. They busted in while the 7-month pregnant Queen was having supper with David and four other courtiers. Darnley and his nobles dragged Rizzio to the Audience Room where they stabbed him 57 times. No matter what they try, they are still to this day, not able to clean the bloodstain. And yes, we saw it, for we visited this beautiful palace in September 2019.

The murder of Lord Darnley

You can imagine the Queen, who witnessed the cold-blooded murder of her loyal secretary, was disgusted by Darnley’s action. On the night of February 9 and 10, 1567, Lord Darnley himself was murdered. He was found in the gardens of Kirk o’ Fields in Edinburgh. The house was burned down, but his body showed signs of strangulation. Suspect to his murder was James Hepburn, 4th Earl of Bothwell. But his guilt was never proven. When Mary married him in 1567, the public did not approve.

Her already instable reign went even more downhill. Shortly after their marriage, Mary was accused of murdering her former husband, Lord Darnley. She was imprisoned in Loch Leven. She escaped Loch Leven in 1568, was re-imprisoned in 1569 and was beheaded in Fotheringhay Castle in 1587. The execution was ordered by her cousin, Elizabeth, but executed by somebody else, without Elizabeths knowledge.

In 1590, James VI, son of Queen Mary and Lord Darnley, married Anne of Denmark and Norway. The Danish court, at that time, was extremely concerned with witchcraft and black magic. This fascinated James. When they went back from Scandinavia to Scotland, their voyage was plagued by storms. James thought this might have been the work of witches. Anne’s father, the King of Denmark and Norway, then started interrogating women whom he thought were responsible for the storms.

The six women, including the wife of the mayor of Copenhagen, confessed to being responsible for the storms. They said they did it to keep Anne from leaving Scandinavia. The women were burned as witches at Kronborg. James decided to set up a tribunal in Scotland, as well. He was very much active in this, even interrogating many accused himself. One of them was healer and midwife Agnes Sampson. She was known as the wise wife from Keith. Agnes was accused by Gillis Duncan and brought to the King.

The execution of Agnes Sampson

She didn’t confess at first, not even after being tortured. The tribunal ordered all her hair to be removed, for they believed the Devil himself had put his mark on her. This mark, made by a lick of the Devil, was usually placed on a private part, tucked away under the witch’s hair.

After several hours of extreme pain and humiliation, Agnes confessed to witchcraft. Even though James didn’t believe her confession, he had her burned at the stake on a square close to Edinburgh Castle (the Witches’ Well), January 28, 1591. That didn’t end James’ obsession. In 1597, he even wrote a book on the subject which he called Daemonology.

No longer a Royal residence

After 1603, Holyrood Palace was no longer used as a Royal residence. By then, James VI became King of England as well (as James I) when he succeeded Elizabeth I after her death. So, he moved to England. In 1571, the palace was bombed by canons by William Kirkcaldy of Grange, during the Marian Civil War and in 1650, the palace was partly burned down while Oliver Cromwell stayed there. Although no-one claimed he had anything to do with the fire. The wing where the fire was at, was used as barracks for a while. From 1671 to 1678 the palace was restored, and it still is that way today.

The ghosts of Holyrood Palace

A grey lady is reputedly seen in the Queen’s Audience Room. She is believed to have been one of Queen Mary’s ladies. Ghostly footsteps are heard in the long gallery, but the most reported ghost to have been seen at the palace is the ghost of Agnes. In the 1990’s, a young German diplomat laid eyes on her specter and fled the room he was in.

He later claimed a bald, naked ghost was coming towards him. Agnes was last seen in 2014 by a maintenance man who was working at the palace after opening hours. He saw Agnes at the end of a well-lit corridor. She was bald, naked and severely injured. The limping ghost was approaching the poor man with her arms stretched out. The man let out a loud scream and Agnes disappeared into thin air.

Holyrood Palace is open to the public every day, except when the late Queen stayed over. We went there after hiking up and down Arthur’s Seat and it was beautiful. Also, we got the chance to see the wedding that dress Meghan Markle wore when she married Harry. Unfortunately, we didn’t see Agnes, but perhaps that’s a good thing. If you ever get the chance to visit, then do! It’s beautiful and we were very impressed by the remains of the abbey, which you can visit when you buy a ticket into the palace.