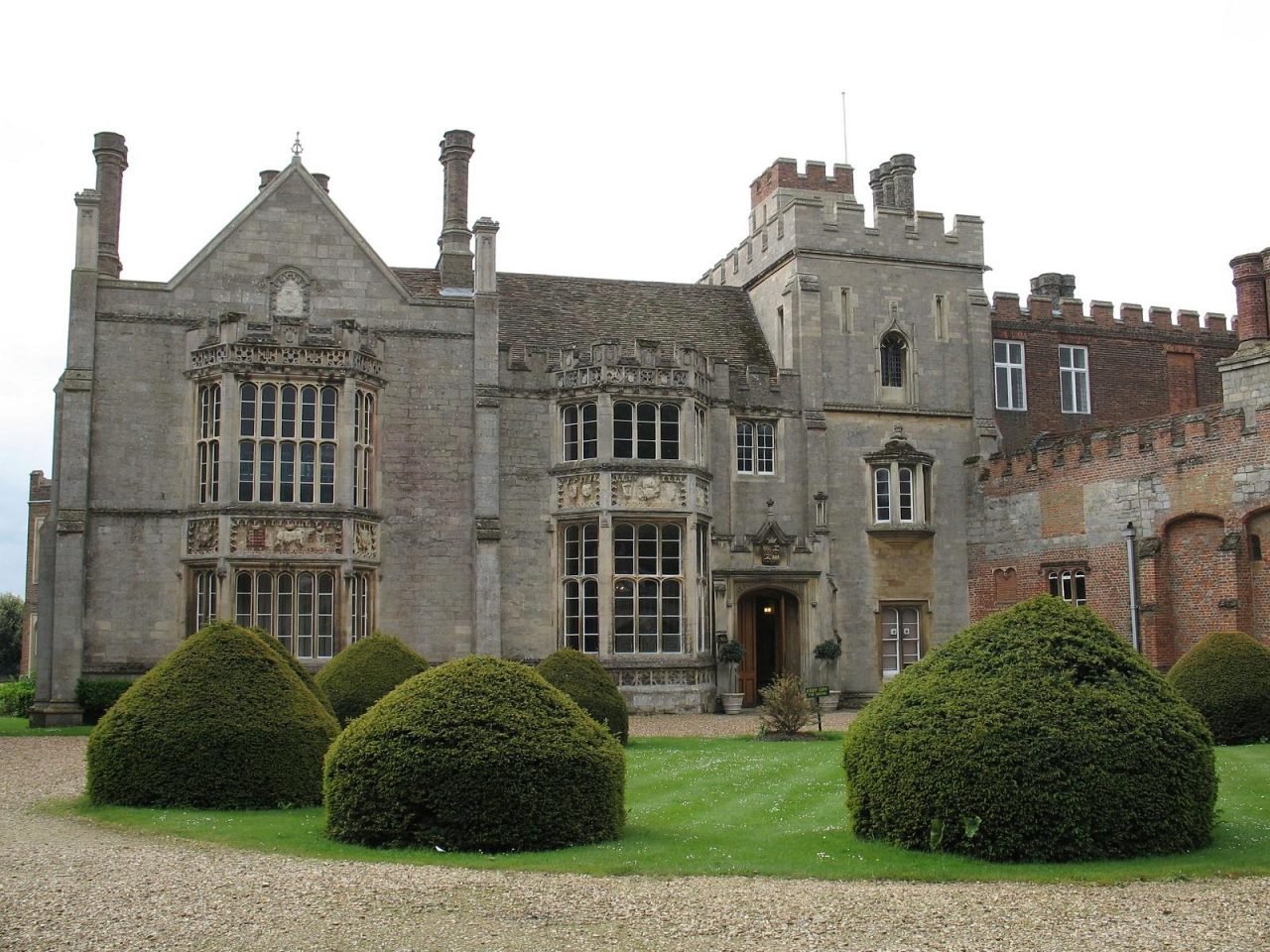 Hinchingbrooke House in Huntingdon, Cambridgeshire, is an English Grade I listed stately home. It has been part of the Hinchingbrooke School since 1970, but the building has many other purposes. The house is built around an existing 11th century priory. Oh, and did I mention it was haunted?

The history of Hinchingbrooke House

Hinchingbrooke House was granted to Richard Williams (alias Cromwell) in 1538 by King Henry VIII for a fee of £ 19,-. Until 1536, the house was a Benedictine priory, built around an 11th century church. Henry VII dissolved all monasteries by that time. Richard Williams made many alterations to the house, changing it into a beautiful Tudor country house. But, features of the 11th century priory are still visible at Hinchingbrooke House. The Cromwell’s (or Williams’s) lived at Hinchingbrooke House until they ran out of money in 1627. They almost spent all their money entertaining James I, who was a frequent visitor of the house, but also Queen Elizabeth I stayed at the house in 1564, and Prince Henry in 1612.

In 1627, Hinchingrbooke House was purchased by the Montagu family. This family was up and coming in English high society and they were granted an Earldom in 1660. They became known as the Earls of Sandwich. Nine Earls of Sandwich lived at the house until they too ran out of money. The Montagu family was forced to sell the property in the early 1960’s. The house and estate were purchased by the Huntingdon District Council.

While the Montagu family lived at Hinchingbrooke House, there was a huge fire in 1830. The fire completely destroyed the original main staircase. Replacement was found in a house in the south of England. Because this staircase was nearly similar to the original staircase, it was moved to Hinchingbrooke House. This staircase had always been a hotspot for paranormal sightings and the fire didn’t stop the ghosts from appearing. But, this new staircase differed a bit in size. So, all ghosts on the staircase now appear from the knees up!

Yes, Hinchingbrooke House is a haunted house. While reconstructing the staircase in 1834, two stone coffins were discovered. In them, two skeletons were found. People assumed these skeletons belonged to nuns, but further research said otherwise. One of the skeletons was in fact female, the other skeleton belonged to a man. Also, the skeletons appeared to be much older than thought. They were buried here between the 10th and 11th century. And, as they were buried in stone coffins and both having good teeth indicated they were important people. Their remains are still visible to the visitors.  It’s still a mystery who they were. However, many sightings have been recorded, especially since Hinchingbrooke House became part of a school in 1970.

The ghosts of Hinchingbrooke House

Ghosts have been seen inside and outside of Hinchingbrooke House. Unexplained noises, disembodied voices, footsteps, the sound of children playing when there are none around and full body apparitions, including that of a dog, are quite common at the house. Let’s zoom in on the most prominent spirits.

There are not many recorded deaths at Hinchingbrooke House, but one is. A cavalier was killed inside these walls. He still haunts the house, but he means no harm. He just keeps to himself as he wanders the building.

The woman on the staircase

The apparition of a nun has been seen by many on the staircase. As said before, she appears from the knees up. This makes it look like she’s floating. It’s unclear if she has anything to do with the lady in the coffin under the staircase.

The ghost of a dark monk also haunts Hinchingbrooke House. He doesn’t do any harm, but he’s known to scare people. While the house was being renovated, the workmen noticed that tools disappeared and reappeared in different sections of the house again. Was there an intruder who played pranks on them at night? One of the workmen agreed to spend the night to see if he could catch whoever did this. That night, he was alarmed by a sound and he saw a dark, hooded figure leaning over him. The man fled in total panic, never to set foot in the house again.

The ghost of the young nun

Outside Hinchingbrooke House, you’ll find a bridge over Alconbury Brook called Nun’s Bridge. Today, Nun’s Bridge is a bridge that can be crossed by walking and cycling only. Cars were once allowed on it, but due to the steepness of the bridge, several fatal accidents happened. There have been some reports of people seeing three ghostly crashed cars near the bridge. Some claim the accidents here were caused by the ghostly apparition of a nun who stepped out in front of oncoming cars, causing them to crash. A young nun has been seen here on numerous occasions. She is said to have drowned in the brook. She’s sometimes seen accompanied by a man and sometimes by a nurse.

The best-documented ghost at Hinchingbrooke House is that of the White Lady. She has been seen by many right outside the house. People describe her quite extensively. All say she is a beautiful young woman in a white long dress. All the people who have encountered her say that she was crying. She’s almost radiant, glowing. No one knows who she is or what her link to the house is. Mark Egerton, writer of the book “Haunting of the Hinchingbrooke House, thinks she might be the spirit of Martha Ray. She was the mistress of John Montagu, 4th Earl of Sandwich. She was brutally murdered on the steps of the Covent Garden Opera House on April 7, 1779. Perhaps she came back looking for her lover.