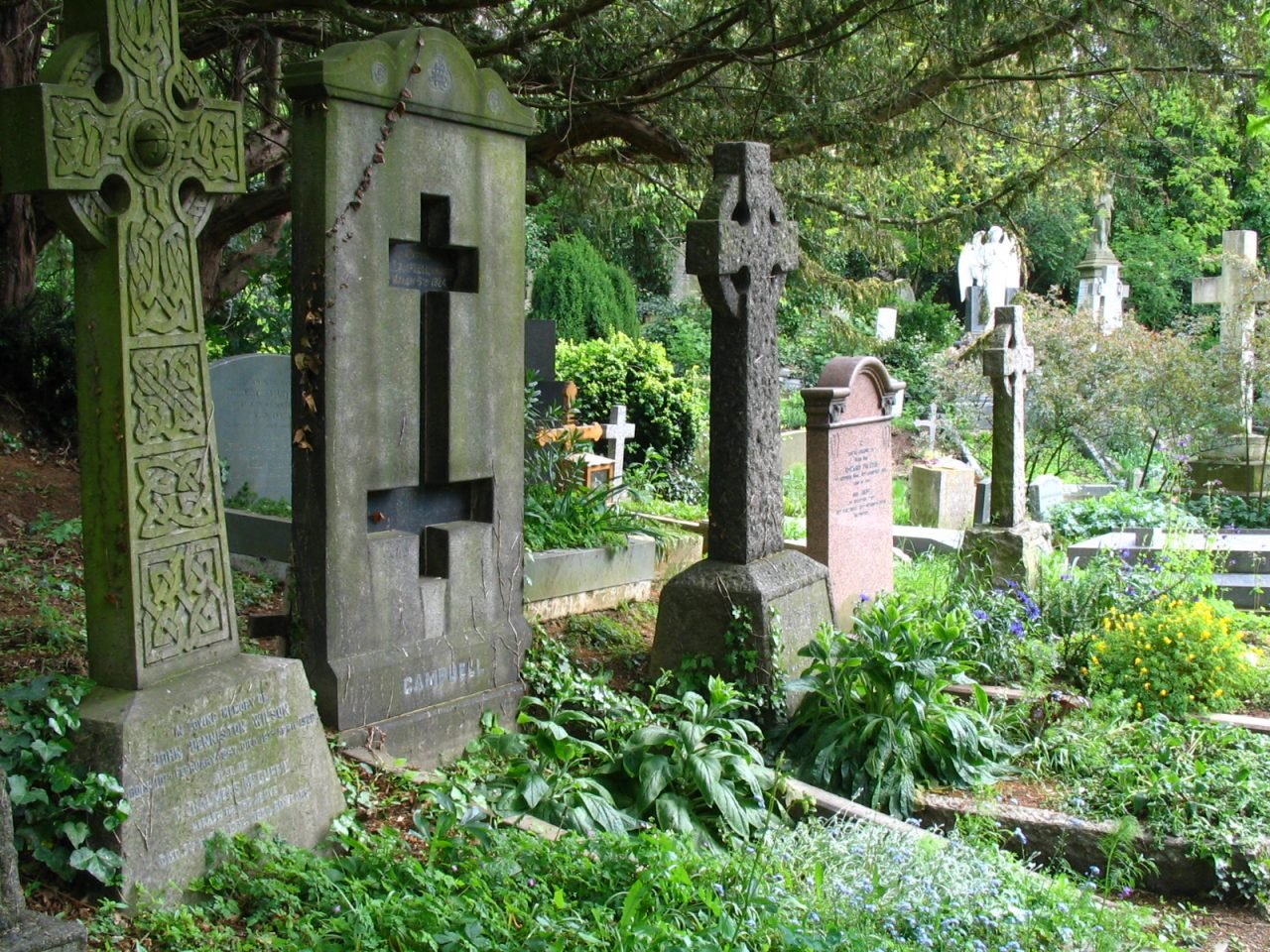 In the north of London, you’ll find and impressive cemetery by the name Highgate Cemetery. The cemetery is divided in two (an Eastern and Western part) by a street called Swain’s Lane. Highgate Cemetery has had both flourishing and declining periods and now serves as a popular tourist attraction. But at night, when all tourists have left, the ghosts come out. And beware of the Highgate Vampire.

The history of Highgate Cemetery

In the early decades of the 1900’s, London reached 1,000,000 residents. This caused a major crisis: due to the high mortality rate, there was simply no space for the dead. At some point, unauthorized and illegal burials were performed, and bodies were wrapped in cheap materials and buried amongst other human remains just a few feet deep. Most bodies were buried in narrow alleys between shops, taverns and houses. The smell of these burial sites was horrible, and it jeopardized public health.

Highgate Cemetery was located West of Swain’s Lane on the former Ashurst Estate. The main gate is still there. Rights of burial were sold for either a limited period or in perpetuity. Soon, Highgate Cemetery became a fashionable place to bury one’s loved ones. The Victorian attitude towards death and its presentation led to the creation of beautiful Gothic tombs and buildings. Buildings such as the Egyptian Avenue, an impressive structure consisting of 16 vaults (each containing 12 coffins) on each side, entered through a massive arch is one of them.

Just about as impressive is The Circle of Lebanon. This circle was created using the earth which belonged to an ancient Cedar of Lebanon tree which once stood in the garden of the former Ashurst Estate. This circle consists of 36 vaults. And finally, there are the Terrace Catacombs. These catacombs have an impressive frontage and room for about 825 bodies in 55 vaults with room for 15 coffins each. Apart from these large buildings there are beautifully decorated graves at the cemetery. About twenty years after the opening, the cemetery had enough funds to extend the area by buying a large section at the east side of Swain’s Lane. This side is now simply referred to as East. A tunnel beneath Swain’s Lane connected the new cemetery with the older West cemetery.

During the Victorian Era, many wanted to be buried the Egyptian way: above ground. Because of this, catacombs and vaults were so popular back then. But regulations of that time, required tombs to be enclosed in lead to prevent “Miasma” (decomposition fluids) to leak. These sealed coffins were perfect for that cause, though something disturbing started happening to some of these. Due to decomposition, gasses would build up inside the coffin. Because the gas couldn’t get out, it could cause the coffin to explode. This was solved by drilling a hole into the coffin, placing a pipe inside and lighting a match to burn off the decomposition gasses.

Highgate was one of the most popular cemeteries in London and this meant that rich and famous London wanted his or her final resting place here. On the West side of the cemetery you’ll find graves of Julius Beer, Charles Dickens’ parents, younger brother and wife (he himself is buried at the Poet’s corner at Westminster Abbey), Michael Faraday and George Michael. This side of the cemetery is full of trees, shrubbery and wildflowers. Birds and small animals such as foxes love it here. The biggest funeral that took place in this part of the cemetery was the funeral of Tom Sayer, a famous bare-knuckled prize-fighter. More than 10,000 mourners attended his funeral with Lion, his own faithful dog, as chief mourner. A statue of his dog guards his grave. Most famous on the East side of the cemetery is the grave of Karl Marx. The philosopher died in 1883. His tomb has suffered a great deal of vandalism. And it has even been bombed twice (in 1965 and 1970).

The demise of the cemetery

By the turn of the century, memorials became less ostentatious. When the First World War broke out, many of the gardeners and maintenance men were called up to fight. Despite of this, the cemetery was kept in immaculate order. But, the cemetery started losing income; less expensive graves were bought, and more graves were abandoned as families died out or moved away. By 1956, the cemetery had to raise more income and sold off its stone mason’s yard and the Superintendent’s house. The two chapels were closed that same year, as well. Unfortunately, it was too late. In 1960, Highgate Cemetery was declared bankrupt. In the following years, the cemetery turned into a jungle and people in the area claimed to have seen people in black cloaks roaming the graveyard at night. It started to look like a haunted place and soon all kinds of ghost stories came to surface and even made it to the press.

There were reports of Satanists performing strange ceremonies and rituals and people started seeing and hearing things. Movie Studio Hammer used the abandoned site for filming their Gothic horror movies. No wonder why people were captivated by the supernatural. The Hampstead & Highgate Express started to receive letters from frightened readers claiming they had seen spooky things around the cemetery. One man whose car broke down near the cemetery saw a frightful apparition with red glowing eyes gazing at him from the gate. Another man was attacked by a creature that came out of the cemetery wall as he walked by. The creature dissolved when a car drove by, blinding it with its headlights.

Other ghosts of Highgate Cemetery

Other supernatural sightings at the Highgate Cemetery are a spectral cyclist who has been seen riding in front of the gates, a tall man wearing a top hat and The Shrouded Figure, a morose female specter who only looks up to the sky, ignoring everyone around her. If one would approach her, she would vanish and re-appear a little further away, doing the exact same thing. Many have also seen the ghost of a mad old woman. Her long grey hair blows behind her as she races amongst the graves looking for her children. People say she murdered them in a fit of rage. The ghost of a woman in white, as well as the ghost of a nun have also been spotted. A figure wading into a pond and a pale gliding form are seen often, too. People also claim to have heard heart-stopping Banshee wails, whispers, bells ringing and footsteps. And then there is the Highgate Vampire.

The Highgate Vampire is said to have been a medieval nobleman who practiced black magic in Romania. After his death, his followers re-located his coffin from the European continent to England and buried him on the place where later the cemetery was located. He was awoken by the Satanic rituals and he now roams the cemetery grounds, most likely feeding on foxes. The Vampire is a tall dark figure who makes his presence known by a sudden drop of temperature. Watches and clocks stop when he’s around. When people got wind of the news that a vampire was haunting Highgate Cemetery, a real vampire hunt arose.

Self-proclaimed vampire hunters wandered the cemetery in the dead of night. Tombs were opened and bodies were mutilated with wooden stakes driven through their chests. Some were even decapitated. These corpses were often removed from their graves and recovered on strange places. Often terrifying the locals. Like that time a man found a decapitated corpse behind his car windshield. It was during this time that two magicians started to have an obsessive urge to find and slay the vampire.

On 24 December 1969, magician David Farrant saw a grey figure when passing the cemetery. He was convinced this was the Highgate Vampire. His story was picked up by another magician, Sean Manchester, who claimed he’d single handedly put a stop to this creature. The rivalry between the two men grew bigger and bigger. On Friday 13 March 1970, Sean Manchester officially decided to have a massive vampire hunt. Many people answered to his call. Despite of police efforts to control the mob, they swarmed over gates and walls into the locked cemetery. The grave of the vampire was never found, but that didn’t mean the men gave up. Sometime later, on 1 August 1970, the charred and headless remains of a woman’s body were found not far from the catacombs.

A few nights later, Farrant was found by the police in the churchyard beside Highgate Cemetery carrying a wooden stake and a crucifix. He was arrested but when his case came to court, he was let go. Rumors began to spread that Farrant and Manchester would meet in what was called the “Magicians Duel” on Parliament Hill Friday 13 April 1973, which never occurred. Farrant was jailed again in 1974, for damaging memorials and interfering with dead remains in Highgate Cemetery. He insisted this was caused by the Satanists. The feud between the two men continued for decades until Ferrant’s death in April 2019. And the vampire? He’s still out there.

Highgate Cemetery is a popular tourist attraction, even though it’s a little hard to reach. I’ve visited the East cemetery myself in 2006. It’s a wonderful place to be with lots of old hidden germs. An access fee is required (£ 4,50 for adults and £ 0,50 for children (8 – 17)). That money is used for restoration and preservation of the cemetery. The West cemetery is only accessible if you take a guided tour. It’s on my bucket list the next time I visit London. Taking pictures is no problem, but for private use only. Making video’s during the tours is not allowed, as well as using a tripod.