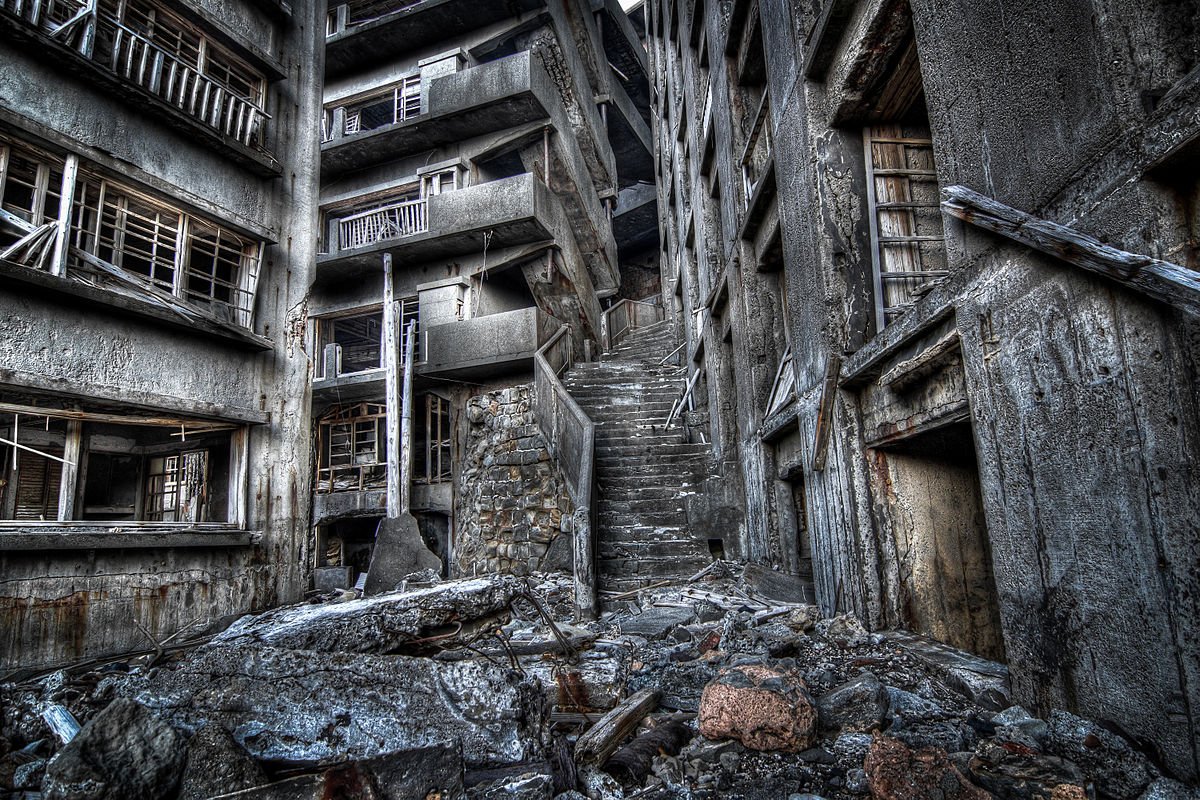 Hashima Island is a small unoccupied island right in front of the Japanese coast, some 9,5 miles (15 km) from Nagasaki. The island is nicknamed Battleship Island because of its shape and it has been abandoned for several years. But, abandoned does not mean empty, because the ghosts of the past have taken over the island and its buildings.

The history of Hashima Island

Before Mitsubishi bought the Hashima Island (or Gunkanjima) in 1890, it was an important coal mine which was discovered in 1887. After 1890, the island became the symbol of the Japanese fast growing industrialisation. In 1916, the first concrete building appeared on the island. It was 9 stories high and it was strong enough to protect the people inside against the numerous typhoons which hit the island annually. After this, more and more buildings were built. But, there’s a dark side attached to the fast growing island, as well.

The dark side of Hashima Island

The buildings were built by Korean and Chinese prisoners who were forced to work here from 1930 to just after WWII. The conditions of these forced laborers were hard, and some never made it back home. The people who worked here named the island “Jail Island” or even “Hell Island”. After the war, the Japanese came to the island to work here themselves. The island had its peak population in 1959. More than 5,000 people worked and lived on Hashima Island. And because the island wasn’t very big, this meant they had 5 ft (1,5 m) living space each!

In 1974, the mines started to run out of coal and people left the island. Soon, the island’s uninhabited parts were reclaimed by nature. The weather conditions started affecting the concrete and buildings started falling apart. Sometimes, people camped out here, but that was a very dangerous thing to do. The government wanted to discourage people from going over on their own and therefore decided to open it to the public. Walls that were on the verge of collapsing were propped up or replaced to make sure the tourists couldn’t get hurt.

Hashima Island was even adopted by UNESCO on the World Heritage List. But, North and South Korea opposed this plan. They hadn’t forgotten about the dark past. Korea eventually bowed, but they demanded Japan to admit their crimes. They also wanted Japan to erect a monument on the island for all those who had been put to work there. Japan finally agreed, but the same day the papers were signed, the demands were swept off the table. UNESCO did get the island on the list in 2015, but not under the terms that were set.

The island of the ghosts

Even though tourists are allowed to visit the island today, the echoes of the past still linger here. Especially in the minds of the relatives of the forced laborers that have been forced to work here and inside the crumbling buildings. Fishermen who sail near the island claim they have seen strange flickering lights in the buildings, even though the island has no electricity. Strange noises have been heard and cold spots have been felt. People say they had the sensation of being watched and there are some claims of people that have been touched by unseen hands.

The island is open to the public, but if Japan is a little too far away for you, you can also have a look at the island in Google Maps! You’ll love it!

Do you want to read more stories about haunted places in Asia? Click here!

Alton Towers Resort is the largest theme park in the United Kingdom. It attracs more than 2 million visitors each year, making it the second most popular theme park in England. It was built around an already existing manor house which was built in 1753. The manor house is now part of the park, and […]
Christ Church Cemetery in Oistins, Barbados, was the site for a string of unusual events in the early 19th century. The mysterious events all seemed to evolve around one vault. The Chase Vault. The tomb belonged to the Chase family, a rich family with at the head Colonel Thomas Chase, a man so vicious, that […]
Chillingham Castle is said to be the most haunted castle in England. More than 100 ghosts are said to haunt it. It was built as a monastery before 1246, later transformed into a castle. You’ll find the castle in Northumberland, near the Scottish border. King Edward I used the castle as an accomodation in 1298 […]