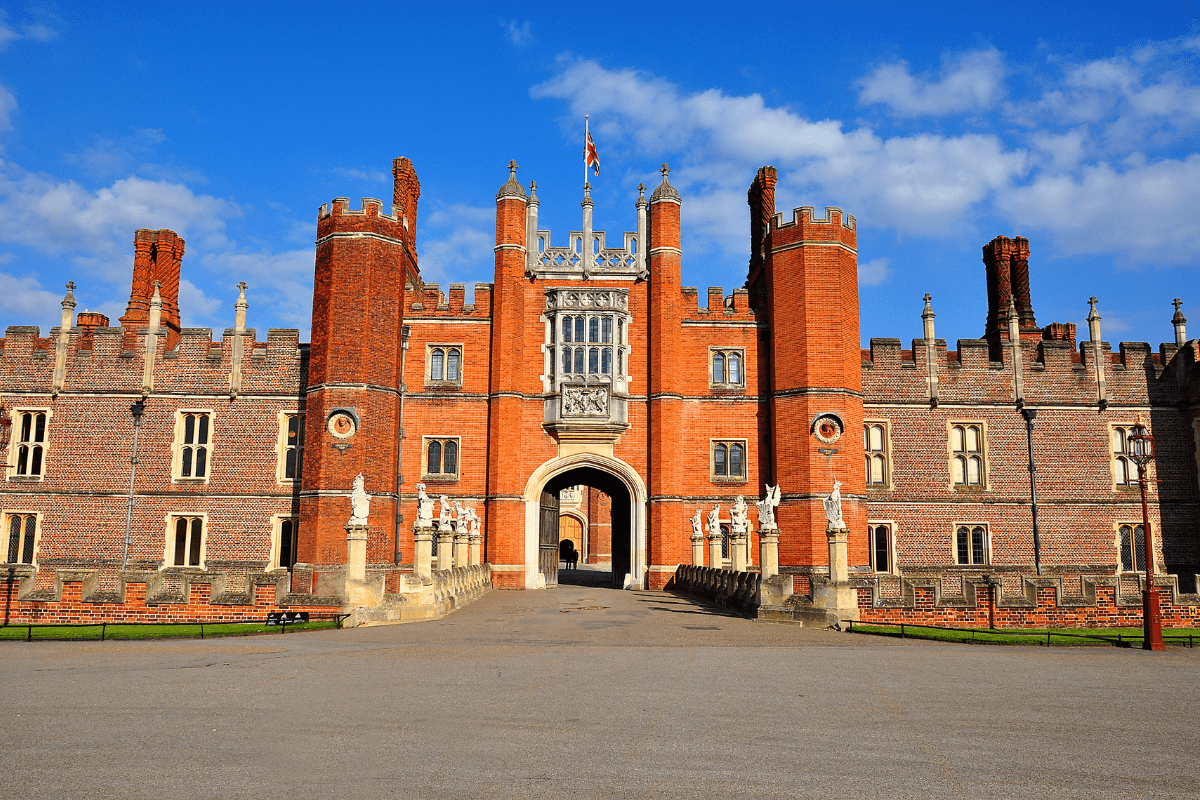 Hampton Court Palace was one of King Henry VIII’s most favourite royal residences. You can find the palace in the London Borough of Richmond upon Thames, 12 miles upstream of central London. The palace is open to the public and it’s a much-loved tourist attraction. But, did you know it was haunted?

The history of Hampton Court Palace

Let’s start with a bit of Tudor history. Archbishop of York and Chief Minister and dear friend of Henry VIII, Thomas Wolsey, took residence in Hampton Court in 1514. Before that, it had been a property of the Order of St. John of Jerusalem. Wolsey immediately started remodeling the place. He spent over 7 years building the finest palace in England. Unfortunately, Wolsey wasn’t able to enjoy his house for too long. He had fallen in disgrace with the King and Henry and some of Wolsey’s enemies were engineering his downfall. Instead, Wolsey decided to give the palace to the King in 1528, hoping to regain his status. But this never happened, and Wolsey died two years later, in 1530.

King Henry was very pleased with the Hampton Court. His court consisted of more than one thousand people and they were now spread over the country, residing in one of the 60 other royal houses and places. Hampton Court was able to fit them all in, so he immediately started making plans for expansion. Between 1532 and 1535, Henry added the Great Hall. This hall still remains today, but most of the original building has been demolished. Many important historical events took place here. Let’s take a look at those.

A happy and a sad home

Henry VIII didn’t only know happy times at Hampton Court. After he had had Anne Boleyn beheaded, he found his true love and “perfect” queen: Jane Seymour. Jane bore him a long cherished son, the later Edward I, but not without a price. Jane died only 12 days after giving birth, in October 1537, due to complications. The King was devastated. Four years later, he learned that his fifth wife, Catherine Howard had betrayed him. The poor 19-year-old girl was imprisoned at the Tower of London and later beheaded for adultery and treason. Henry himself died in January 1547, leaving Hampton Court to Edward I, and later to his two daughters: Mary I and Elizabeth I.

No longer a royal residence

When Queen Elizabeth I died in 1603, she died childless. This was the end of the Tudor-dynasty. She was succeeded by her cousin (and Scottish King) James VI. In England he became known as King James I of the House of Stuart. His son, Charles I, was ill-fated. He was deposed as king and beheaded for high treason in 1649. The monarchy was abolished and the Commonwealth of England took over. England became a republic. Charles’ son, also Charles, was banned from England. But, in 1660, Charles came back to England and re-claimed the throne. the monarchy was restored! Charles II however, never resided at Hampton Court Palace.

Hampton Court Palace was referred to as old-fashioned, especially compared with the Palace of Versailles in Paris. When William III and his wife Mary II became king and queen, they decided the palace needed to be modernised. The Great Hall, which was built by Henry VIII, was to remain, all the rest was to be demolished. William called upon architect Christopher Wren to draw the plans. The modern palace would be rebuilt in the Baroque style, bigger and better than Versailles. But when Mary died, William lost interest in the project and all the renovations were put down. So now Hampton Court was partly Tudor partly Baroque style, but strangely it worked. The use of pink bricks saved the project and it’s still a masterpiece today!

The ghosts of Hampton Court

Three female ghosts haunt Hampton Court Palace. They all have been frequently sighted by many. Both staff and visitors have stories to tell. On one day in 1999, something strange happened. Two ladies, attending different tours, both fainted at the exact same spot in the Haunted Gallery. So, let’s have a look at who haunts this place.

The ghost of Jane Seymour

A woman in white has been seen near the Silverstick Stairs many times. She appears to be very sad and pale. Eye witnesses claim that the spirit walks up the stairs before disappearing. The stairs lead to where once Jane Seymour had her rooms. This is where she gave birth to Edward and died. Her spectre has been seen in other places of Hampton Court Palace as well. Perhaps she’s still looking for her son and husband?

The ghost of Catherine Howard

Catherine Howard was only 17 years old when she caught the King’s eye. He was 49 and dealing with some health problems including a smelly open wound on the leg. But before she married the king, she wanted to marry another man: Thomas Culpeper. He served in Henry’s court and a secret love-affair between the two started. Henry found out about the affair while he was attending Mass. Catherine was imprisoned in her rooms before being sent to the Tower of London.

Legend says the young girl managed to briefly escape her guards. She ran along the (now called) Haunted Gallery screaming and pleading for the King’s mercy. Catherine never reached the King, nor did she ever see him back again. She was beheaded at the Tower of London at the age of 19 in 1542. Catherine’s ghost has been seen and heard by many in the Haunted Gallery. She forced to her act of desperation over and over again.

The ghost of the Grey Lady

Perhaps the most frequently sighted ghost at Hampton Court is the ghost of the Grey Lady. It is believed that she is the spirit of Sybil Penn. She was a servant to no less than 4 Tudor monarchs, including the wet nurse of baby Edward. Sybil took good care after Elizabeth I when she suffered from smallpox in 1562. The Queen recovered, but poor Sybil caught the pox and she wasn’t so lucky. The loyal servant was buried near Hampton Church.

When the church was renovated in 1829, Sybil’s tomb was disturbed. From that moment, people started seeing a Grey Lady in Hampton Court. And she likes to show herself. Sybil was also linked to strange spinning wheel sounds coming from behind the wall of a grace and favour apartment. When the wall was removed, an old spinning wheel was discovered.

When William III and Mary II contracted an architect to practically rebuild Hampton Court, Christopher Wren created Fountain Court. This is a cloister-like Court with a beautiful fountain before it. During the construction, the builders most likely built right on top of a shallow grave which contained two male skeletons. The skeletons were re-discovered in 1871 during a routine excavation. An elderly woman living in a nearby grace and favour apartment was hugely relieved. She had constantly complained of knocking and banging sounds in her apartment walls, but no one had believed her. All disturbances ceased when the remains were properly buried. It is believed that the two men were victims of the Roundheads during the Civil War (1642 – 1651) and hastily buried.

The last monarch to live in the Hampton Court Palace was King George II. It’s still in possession of Queen Elizabeth II and The Crown, but they’ve opened the palace for the public. Don’t forget to wander through the amazing gardens, to take a look at the historic tennis court installed by King Henry VIII himself and the huge vineyard, which was once the largest in the world. Festivals and flower shows are held here annually. And perhaps, when you’re all by yourself inside the palace, you’ll pick up a scream or see an apparition of one of the female ghosts that haunt the palace!