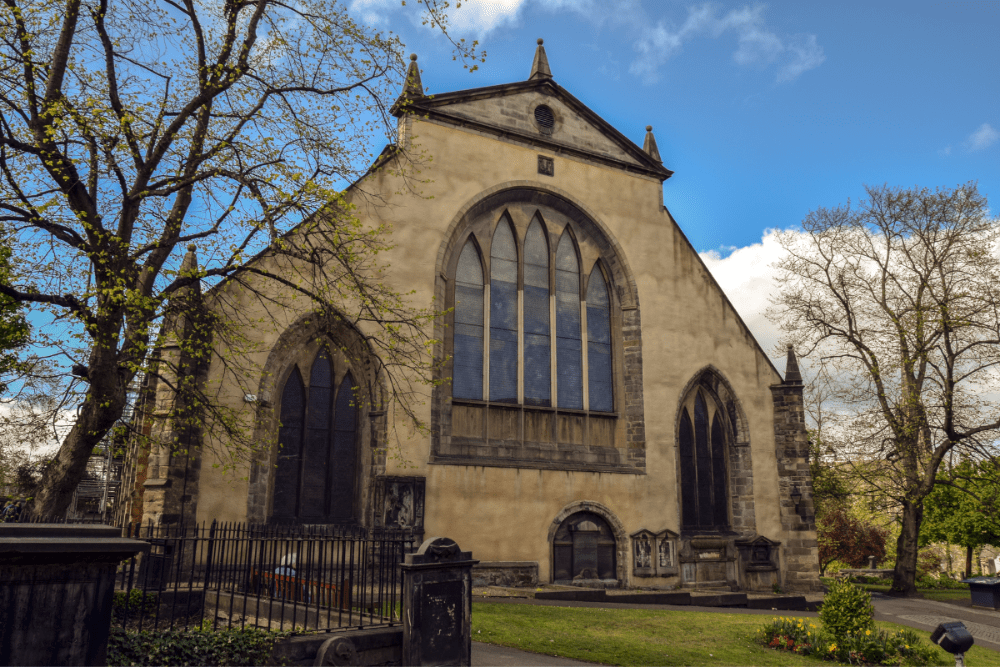 When I visited Edinburgh last year, I just needed to go to Greyfriars Kirkyard. I had already done a lot of research about this beautiful Scottish graveyard and I just knew it was going to be interesting. Even though I didn’t have any paranormal experiences there myself, it was one of the highlights of the weekend. I’ll tell you all about it in this story.

The history of Greyfriars Kirkyard

Greyfriars Kirkyard was opened in 1562, when the old cemetery of St. Giles became overcrowded. Back in the days, cemeteries and graveyards were located outside the city because they caused a certain odor nuisance. As the city grew, houses and buildings were growing all around the graveyard so it came to lie within the city walls. It was named after a Fransiscan friary where the monks wore grey habits. This friary was torn down in 1560. Many famous residents of the city are buried here and it’s one of the main tourist attractions.

An inspiration for Harry Potter

Harry Potter’s creator J.K. Rowling lived in Edinburgh while writing her world famous books. The entire city inspired her as did Greyfriars Kirkyard. No less than 5 names were taken right from the graveyard. For instance the name Potter. She found this name on a family grave and decided naming the main character after it. Mrs. Elizabeth Moodie was the inspiration for Alastor “Mad Eye” Moody, Margaret Louisa Scrymgeour Wedderburn lives on as the Minister of Magic Rufus Scrymgeour and Professor Minerva McGonagall’s name was abstracted from William McGonagall’s grave, Scotland’s worst poet. He wrote the infamous Scottish poem: “I saw a crow. He’s not here now”. Wow. And last but not least she named her most evil character after a man who died at the age of 26 in Trinidad. Poor Thomas Riddell has no idea he’s had Lord Voldemort named after him.

Most people who visit Greyfriars Kirkyard stop to visit a small and fairly humble grave. It’s the grave of Greyfriars Bobby, a loyal terrier that once belonged to John Grey, a police officer. The dog was only two years old when his master passed away in 1858. Their bond must have been rock solid, because poor Bobby spent the remaining 14 years of his life next to the grave of his deceased owner. Bobby himself died on January 14, 1872. He was given a tombstone in 1981 by the Dog Aid Society close to his owner.

The chance that Bobby’s actually buried in that spot is close to null. There is no place at the graveyard that is not consecrated, and therefore not “suited” for a dog’s burial. He’s probably buried right outside the cemetery gates. Poor thing. However, people from all over the world bring sticks, balls and toys for the little brave dog. He was even given his own statue near the entrance of the graveyard. There he stands proud and watches over everyone who walks by. I sure hope he did find his owner again in the afterlife.

Some graves at Greyfriars Kirkyard seem to be behind bars. Don’t worry, this was not to prevent the dead from getting out of their graves, it was to prevent the living from getting in. There was a time when no fresh grave was safe in any cemetery. Graverobbing was a very lucrative job because medical schools used the corpses in the classroom. To make sure deceased loved-ones remained in their grave, it got covered with a steal frame. These frames are called mortsafes. You can still find a few here!

Covenanters were members of a Scottish religious and political movement who supported the Presbyterian Church of Scotland. They signed the National Covenant in Greyfriars Kirk on 28 February, 1638. The movement was erected after disputes over church structure and doctrine with James VI & I, and his son Charles I of England. In 1640, the Covenanters even took control of Scotland. But, civil wars caused the Covenanters to lose control of the Kirk and they became a persecuted minority.

Following the defeat of the militant Covenanters at Bothwell Brig in 1679, 1200 Covenanters were imprisoned. They were brought to a field in the south of Greyfriars Kirkyard, simply because that many prisoners didn’t fit anywhere else.

Sir George Mackenzie was a Scottish lawyer and as Lord Advocate and Minister responsible for the persecuting policy of Charles II in Scotland against the Presbyterian Covenanters. Some of the imprisoned Covenanters were executed. Many died of maltreatment. The way he treated the Covenanters gave George Mackenzie the nickname “Bluidy Mackenzie”. And he still lives up tot hat name.

George Mackenzie died in 1691 and was buried in a mausoleum in Greyfriars Kirkyard. When you visit his mausoleum, you’ll see it’s completely sealed off. You cannot enter the mausoleum. The reason for this is the amount of aggressive paranormal energy that lurks inside. There have been claims of paranormal phenomena since 1990, but these increased severely since 1998. In that year, a wanderer broke into George’s mausoleum to escape the dreadful Scottish Winter weather for the night. This must have angered George Mackenzie so much that the poor wanderer got physically attacked by his spirit. Between 1990 and 2006, no less than 350 claims of violent poltergeist attacks are documented.

People have been pushed, scratched, bitten and beaten while being inside his mausoleum. People have passed out and George was even responsible for a broken limb. Hardly anyone made it out unscarred. George is one hell of a pissed off ghost. In 2000, exorcist Colin Grant was called to calm the ghost of George down. Colin didn’t stay in the mausoleum very long. He immediately felt the evilness of the ghost and he was afraid George would kill him. A few weeks later Colin died of a heart attack. Coincidence?

Greyfriars Kirkyard is a real must-visit when you go to Edinburgh. Most graves are breathtakingly beautiful. So much detail! I will definitely go back some day. But, would you dare to challenge old George Mackenzie?