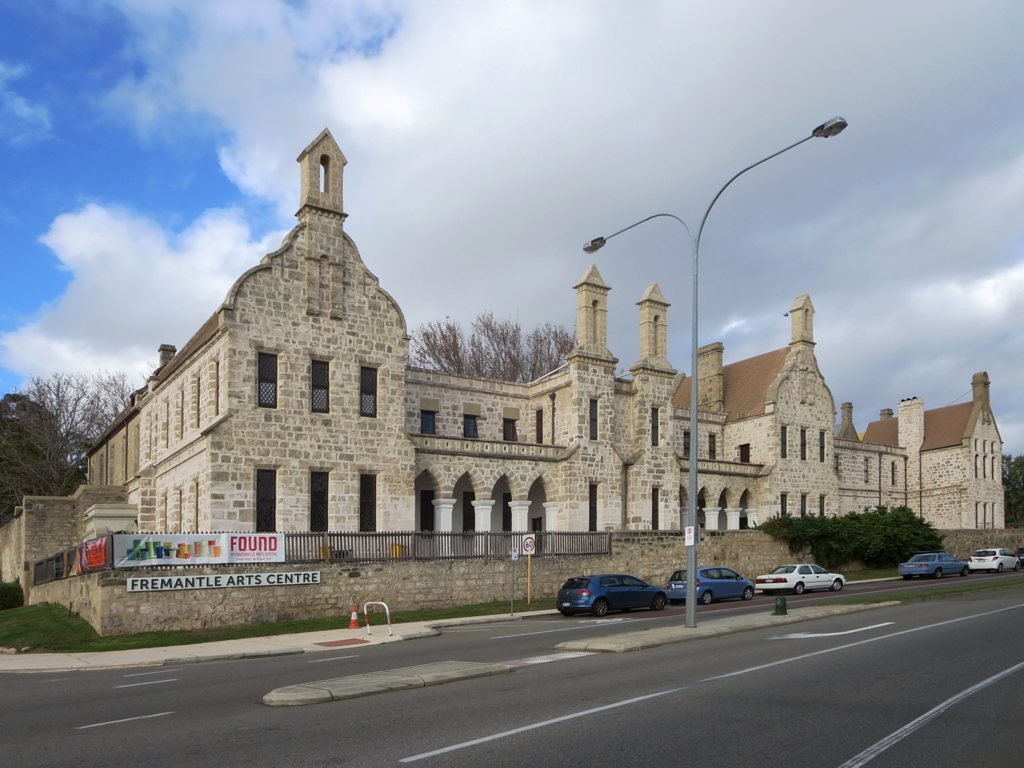 The Fremantle Arts Centre in Fremantle, Western Australia, was built in 1867. The building served several purposes before it became an arts centre. A technical school, a US Naval Submarine Depot and a maritime museum. But the building’s original purpose was that of a lunatic asylum. And that’s the reason why this place earned a spot on this website.

The history of Fremantle Arts Centre

The Fremantle Arts Centre was constructed in 1867 with the help of convicts who were imprisoned at Fremantle Prison. The Gothic building was then opened as the Fremantle Asylum and Invalid Depot. During its first few years, the asylum housed people with mental disorders. But, during the 1890’s gold rush, miners and Chinese labourers with sunstroke and alcohol and opium abuse were also admitted. And elderly people, who couldn’t be housed were taken in as well. In 1900, 219 patients lived at the asylum, with up to 20 people occupying one room. The maximum number of patients in the whole asylum was 50! Problems were bound to happen, and they did.

When the number of patients at the asylum was at its peak in 1900, something terrible happened. A woman named Mrs. Clifford was murdered by a fellow patient. Her husband discovered her in her room. She was unconscious and she showd signs of a heavy beating. Mrs. Clifford died three days later. Another death occured around the same time. A male patient, who was supposed to be under strict observation, managed to commit suicide on broad daylight. And a nurse was found guilty of keeping patients awake at night by sticking them with hatpins. People in the asylum (the youngest was only 9) were treated as prisoners. Even the elderly. All of these events finally sparked a public scandal. An official inquiry resulted in the appointment of a medical superintendent. A trained mental health nurse was hired as well.

Moondyne Joe, whose real name was Joseph Bolitho Johns, was a well-known Australian bushranger who was caught stealing a horse. This got him imprisoned at Fremantle Prison. Shortly after his release, he was caught once more! This time for stealing and killing an ox. He managed to escape jail three times (one time kind of successful), but this probably took its toll on the poor man. By the age of 73, Moondyne Joe was taken to Fremantle Asylum in 1900 because he was showing strange behaviour. He died here a year later and was buried in a pauper’s grave at Fremantle Cemetery. Read more about Moondye Joe.

By 1908, all mental patients were transferred to a new facility in Claremont. In 1909, the Fremantle Asylum was declared a poor house for women. The new name became the Women’s Home. A year later, in 1910, it also became the place for a maternity training school. This was the first maternity training school in Western Australia. It remained this way until 1916, when the maternity school was transferred to the newly built King Edward Hospital for Women. It remained a poor house until 1941. By then, there were several protests by women’s groups who were concerned about the condition of the home. Young girls, mainly prostitutes with venereal diseases, were locked away on the upper floor. When all this came to light, the facility was closed.

The Fremantle Arts Centre during WWII

In March 1942, a small group of American naval servicemen arrived in Fremantle. They had been on the run for the Japanese invasion of the Philippines and found refuge in the old Women’s Home. Soon, the site was expanded with 22 additional buildings, housing 21 officers, 139 enlisted men and 102 civilians who worked and lived at the depot. After the war, the site was abandoned again but reopened as the Fremantle Technical School in 1949.

By 1958, the building was threatened with demolition. The historic building was saved by the mayor of Fremantle: Sir Frederick Samson. He wanted to turn the site into a mariner’s museum and an arts centre. Fremantle Arts Centre opened in 1973, which it is still today. But, strange things happen at the centre…

The ghosts of Fremantle Arts Centre

The Fremantle Arts Centre has been a hotbed for eerie encounters. During WWII, the American soldiers who lived here already complained about hearing whispers, banging and strange noises. There are unexplained cold spots, doors are opening and closing by themselves and there are sounds of crying and yelling. Some visitors of Fremantle Arts Centre reported the feeling of being kissed on the cheek by ice cold phantom lips. And the apparition of an elderly woman was seen wandering the corridors on more than one occasion.

Australian ghost whisperer Anthony Grzelka won’t forget his visit to Fremantle Arts Centre that easily. He had an eerie encounter with what he thinks is the spirit of a former warden or male nurse. The psychic felt uneasy when the spirit came closer and the temperature in the room dropped immediately. He also smelled the scent of burning which grew stronger and stronger. The stench of burned flesh eventually made him sick. Later he found out that the room he was in was used for electric shock therapy.

Apart from the apparition of the elderly woman, another phantom woman has been seen around the former asylum. She is believed to be the spirit of a woman who was admitted to the asylum after her daughter was kidnapped. The poor woman had mental issues after her traumatic ordeal. She ended her life by jumping out of a first floor window. The voice of a little child has been heard in this very same room.

Today the Fremantle Arts Centre is open to the public every day. It’s a happy place now where exhibitions, courses and events are organised. But, sometimes the darker days of the past pop up and spirits make themselves known.