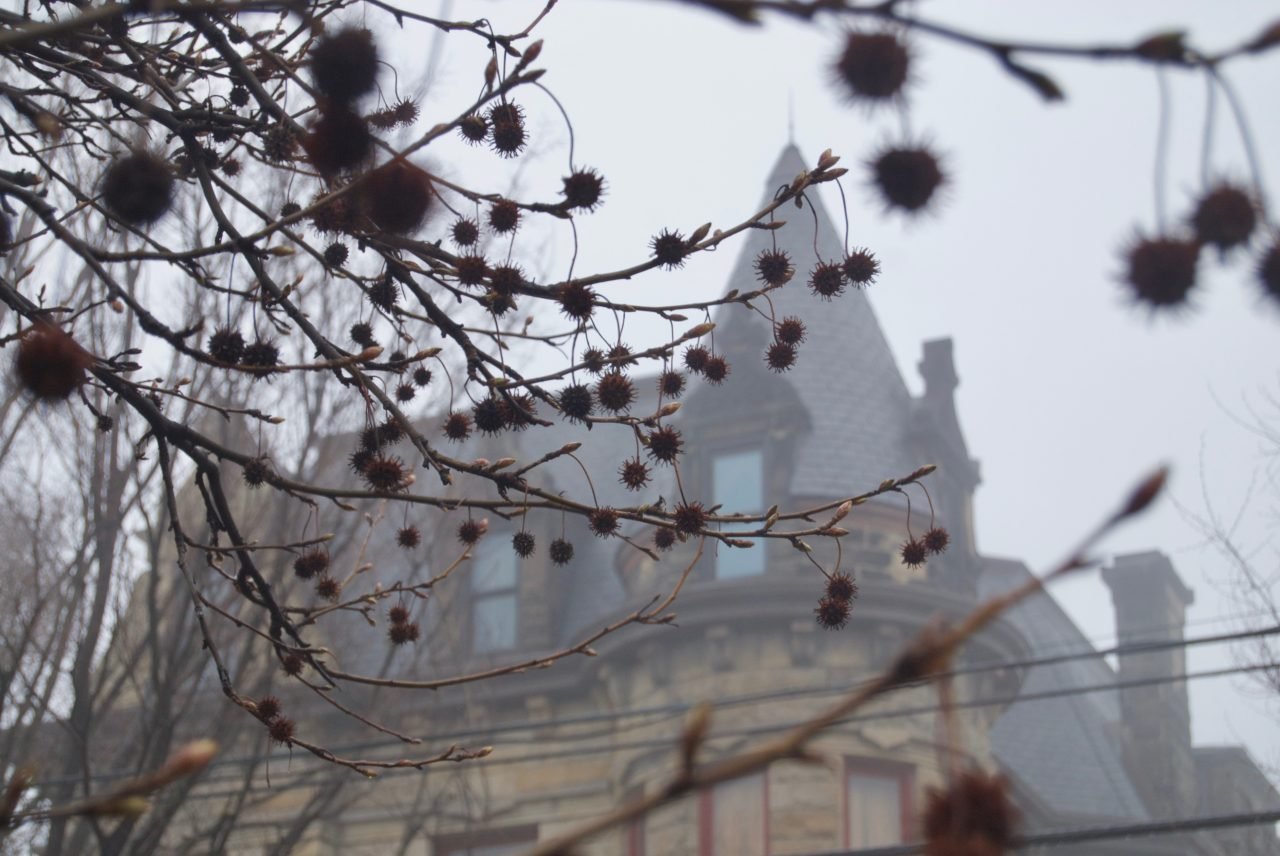 In Cleveland, in the American State Ohio, you can find the Hannes Tiedemann House. This imposing mansion is better known as Franklin Castle, because it’s located on Franklin Boulevard. But it’s also known as the most haunted house in Ohio. Why? Because things have happened here that should have never come to light…

The history of Franklin Castle

The German immigrant Hannes Tiedemann was a banker and he built this mansion for his family. It was built between 1881 and 1883. The first few years, Hannes, his wife Luise and their two children August and Emma lived happily in this 20-room house. Hannes’ mother, Wiebeka, also lived with them. Unfortunately, the happiness ended when 15-year old daughter Emma died of the consequences of diabetes on January 15th, 1891. A few weeks later, Wiebeka also passed away. Immediately after this, people started speculating. Was the Tiedemann family cursed? When in the 3 years that followed 3 more Tiedemann children were buried, of which the youngest was just an infant, the speculations really came loose. Did Tiedemann have something to hide?

Hannes wanted to cheer his wife Luise up by building her a ballroom. This ballroom was as large as the entire house. It was built on the fourth floor. Hannes also decorated the house with towers and gargoyles and it started to look more and more like a castle. In this period he also started building secret halls and tunnels in the house. Why he did this is unclear, but according to the legend, Luise used these tunnels to escape her husband’s bad temper. When Luise died in 1895 when she was only 57 years old, more strange things came to the surface. People claimed Hannes had several love affairs, sometimes even in the house itself. He allegedly forced women to have sex with him and he didn’t even shy away from murder.

Hannes must have had enough of the history of Franklin castle, for he sold the house shortly after Luise’s  death to the Mulhauser family. He re-married to Henrietta, a waitress. But the marriage already ended in a divorce a year later. Hannes himself died in 1908 because of a massive stroke while taking a walk in the park. He outlived his entire family, even his grandchildren. There was nobody left to claim his inheritance. The German Mulhauser Family sold the house to the German Socialist Party in 1913.

Franklin Castle was supposed to be a place for meetings and parties, but instead the house was used to house Nazi’s. Legend says 20 people were killed in the house with machine guns because of political disagreements. Later residents claim they could hear the fight over and over again inside the house. After that, the house remained vacant for a while until it was bought in 1968 by James Romano and his family. His wife had always been fascinated by the large mansion and wanted to turn it into a restaurant, but the ghosts made sure that didn’t happen.

When the Romano’s were busy restoring Frankin Castle, Mrs. Romano sent the children upstairs to play. A while later, the four children came downstairs to ask for cookies. They wanted to take an extra cookie with them to give to the sad girl who was crying upstairs. When Mrs. Romano went up with them, she saw nobody, but the children insisted they played with other children up there all the time. Not just with the crying girl. Were these children the deceased Tiedemann children? Not just the idea of ghost children scared Mrs. Romano.

The organ music that filled the house on a regular occasion did, too, even though the Romano’s didn’t own an organ. Also, footsteps, sounds of sounding glasses and turning ceiling lamps made the family get help from some paranormal investigators. During one investigation, one of them even ran out of the house screaming and a priest was asked to perform an exorcism. The priest told them there were evil spirits in the house and that they should leave because they were too powerful to remove. And so, they did in 1974.

The house was sold to Sam Muscatello, who wanted to turn the place into a church. All ghost stories didn’t do much good to his church, so he decided to turn Franklin Castle into a tourist attraction. He opened the house to the public and gave people tours. Fearless people could also spend the night there. He wanted to make a profit out of the ghost stories. He was also intrigued by all the secret passageways and tunnels and he decided to explore the house. In one of the hidden rooms he made a gruesome discovery. He found human bones. He took his story to the media. Some people claim he placed the bones there himself to seek more attention. But the tourists stayed away, but the strange stories continued.

Muscatello sold the house again, but the strange occurrences his guests had written in the guestbook remained interesting. Further research brought more wrongdoings of Tiedemann to light. A woman in black was seen in the tower room from time to time. She is said to be the ghost of Rachel, a maid who didn’t want anything to do with Tiedemann’s sweet talks. She was probably strangled by Tiedemann because people feel as if they are choking when they are up there. People who had spent the night there, claim to have heard a woman suffocating, but when they went up there, no one was there.

The spirit of the 13-year old niece of Tiedemann is said to haunt the house. Karen was hanged in one of the tunnels behind the ballroom because she was insane. Tiedemann claimed he wanted to put the girl out of her misery, but in truth he caught her in bed with one of his grandsons. Someone was killed in one of the rooms with an axe and no less than 12 baby corpses were found in a secret room. Rumors say a doctor briefly lived in the house after Tiedemann. He experimented on the babies. Sounds of babies crying are frequently heard as well.

Michelle Heimburger had great plans for the mansion and wanted to restore it the way it once was. Unfortunately, a huge fire in November 1999, just a few months after she bought it, ended this dream. It was partly destroyed, and she didn’t have the money to fix this. Later, a group of people bought it to turn it into a club. The house remained untouched until 2006 and people grew suspicious. Apparently, the house was used for shooting porn movies. Franklin Castle remained unoccupied after that. The boarded-up windows and the big fence with the no-entry signs on it give the house a creepy and depressive look.

But, there’s some good news. In 2011, the European tapestry artist Chiara Dona Dalle bought the house. In 2012, a permit was issued to convert the house into three family homes. Let’s just hope the new families can live in perfect harmony with its resident ghosts.

Do you want to read about other haunted places in America? Click here!