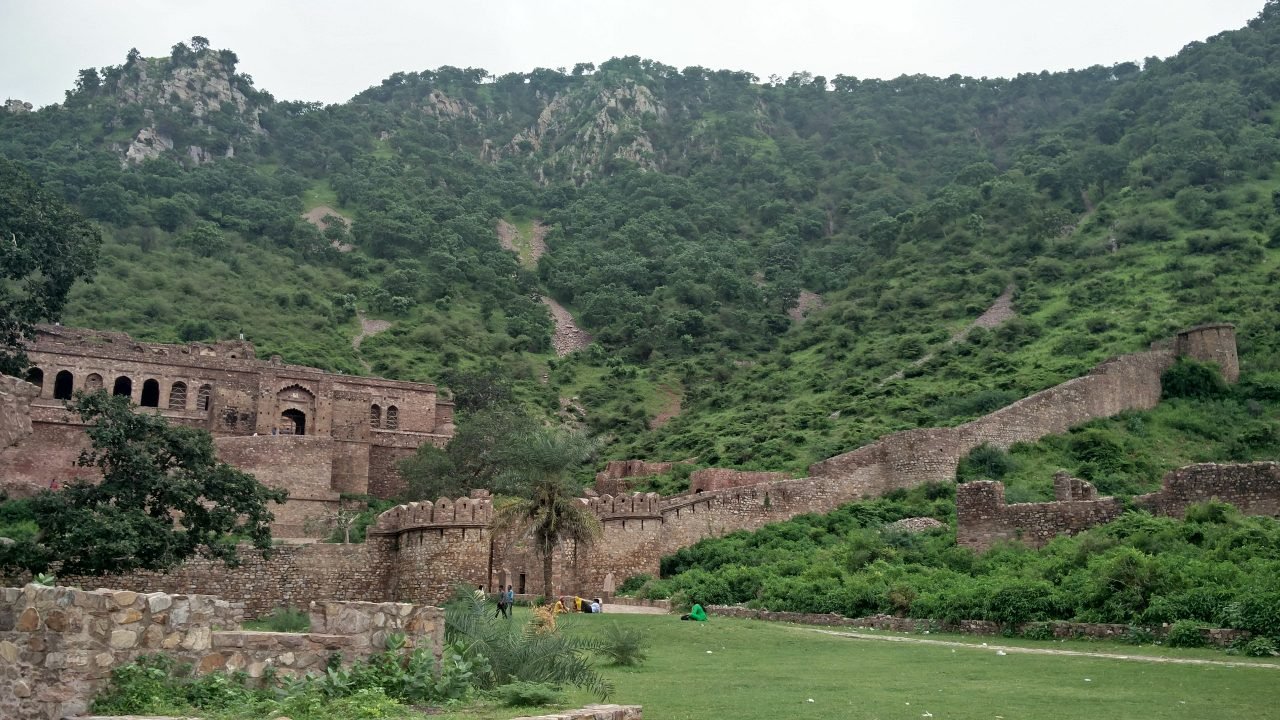 On the edge of the Sariska Tiger Reserve, in Rajastan, India, you can find the impressive Fort Bhangarh. The fort was built in the 17th century by King Bhagwant Das. If you’re in the neighborhood, you really should visit the place. But after 6 PM you’re not allowed in anymore. If you do, there’s a chance you won’t return at all.

The history of Fort Bhangarh

King Bhagwant Das had two sons. The eldest was Man Singh I. He was one of the Navratnas  Akbar’s Court. This elite group of nine men were the nine jewels of King Akbar who were to serve his court. His younger son, Madho Sing I, was to become king. This is why Bhagwant Das built this fort for him. The fort is located between the cities Jaipur and Alwar. Masho named this fort Bhangarh, after his older brother who was nicknamed Bhan. Within its gates at least 10.000 people lived. It was a thriving place with many temples, palaces and havelis (traditional houses). In 1640, the fort was suddenly abandoned. Nobody knows exactly what happened. And this is when the ghost stories began…

My old primary school teacher visited India at least once a year. And he could tell magnificent stories. But he never mentioned Bhangarh. Unfortunate, because the legends of this fort are very interesting. There are two legends about the abandonment of Bhangarh.

The first legend is about Baba Balak Nath. Baba and Sadhu (a saint) both lived within its walls. No house higher than his was allowed to be built there. If a shadow would fall over his house, the fort and everybody in it would be destroyed. Personally, I think the second legend is far more interesting.

Once upon a time, there was a wizard who performed dark magic. That Wizard was named Singhia, fell in love with the princess of Bhangarh, Ratnavati. Ratnavati was extraordinarily beautiful: all men adored her. She thought Singhia was a hideous man. She wanted nothing to do with him. One day, eighteen year old Ratnavati went to the market to buy Attar (a perfume). Singhia quickly made a potion using dark magic. The potion would make Ratnavati fall in love with Singhia madly.

But Ratnavati wasn’t that naïve. She saw through his plan and broke bottle holding the potion against a big rock. The rock started to roll and it crushed Singhia. But before it did, he cursed the fort. A few days later, Bhangarh was attacked by soldiers of the Mughal Empire. They killed everybody, including the princess. Wizard Singhia came back and claimed her soul. She was forced to marry him, for eternity.

During daytime, it’s okay to visit the fort. Some people do claim to have a rushed feeling when they walk around the fort, but most of them feel this is a place of great peace. If you enter the fort through the main gate, you pass a creepy place called Bhoot Bangla, meaning the House of the Spirits. But the beauty of the fort will make you shake that off at once. The heavily decorated Hindu temples are in good shape even though there’s hardly been any maintenance. Outside the fort one of King Hari Singh’s sons is buried. He was converted to the Islam and wasn’t allowed to be buried within the fort’s walls.

People say the dead residents of Bhangarh still live in this city. Locals believe that they are responsible for the disappearance of people visiting the fort after 6 pm. The main gate will be shut hermetically after this time. At the entrance, a huge sign says you’ll be in big legal trouble if you do visit after 6 pm. But, why would you care if you won’t return anyway?

What happens after sunset?

The locals are terrified of Fort Bhangarh after dark. They claim to hear strange sounds like screams, cries, moaning and the rattling of bracelets. People also claim to hear whispers, smell strange smells and see shadow figures. Strange music is often heard within its walls. The locals wouldn’t go in, not even for a million. The warning signs are only there to keep out the tourists. If you had the chance, would you go in?

Normally, Fort Bhangarh is open to the public from 10 am until 5 pm each day. Now, because of the pandemic, you should check if it’s open.