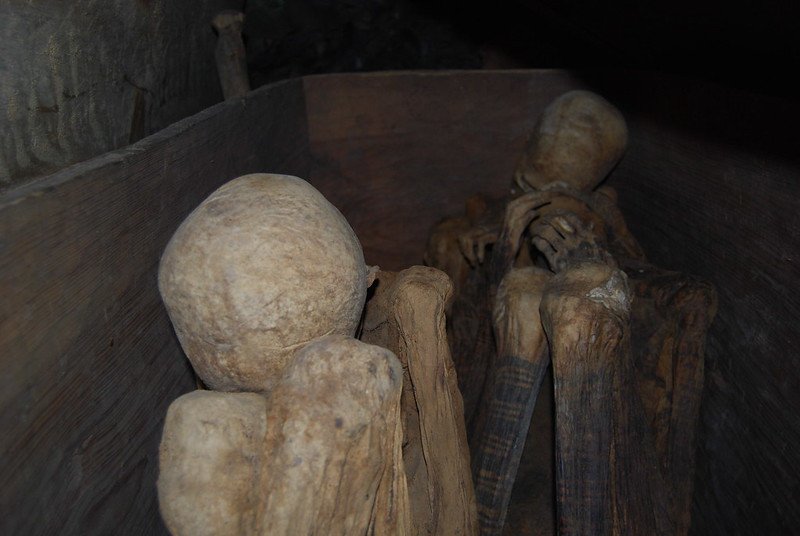 Fire Mummies of the Philippines

We have seen mummies before on this page, but in the Philippines there are very special mummies. These mummies can be found in the Timbak Caves. These differ from the ones we’ve seen before. Especially the way they were conserved is unique. Not a haunted or creepy place this time, but a pretty interesting one.

The history of the Fire Mummies

The Fire Mummies as they are called, were created between 1200 and 1200 AD, but some claim the first mummies were conserved 200 years before Christ. “Fire Mummies” is not the only name used for them. They are also known as Kabayan, Ibaloi and Benguet Mummies. They were members of the Ibaloi tribe. The location of the mummies is secret because many were stolen in the beginning of this century. The site is still not secured, which is quite questionable because the mummies are now on the UNESCO-list.

If you want to visit the mummies, you have a long journey ahead of you. First you’ll have to drive up to the Kabayan Mountains. Then you have a 4-hour hike ahead of you to reach the Timbak caves. Your reward is 50 to 80 mummies in wooden boxes. None of the mummies are buried with expensive possessions. Sadly, gravediggers are interested in the mummies themselves.

It is the mummification process that makes the Fire Mummies so special. The mummification already started before the person died! The dying received a very salty drink to drink. After the person died, the body was washed and placed in a sitting position. Then it was roasted over the fire. That’s how they got their name. The skin was dried this way. Then tobacco smoke was blown into the mouth of the deceased so the intestines dried. Then the body was rubbed with certain herbs. The whole process could take weeks or even months. After all the steps were taken, the mummy was placed inside his or her own wooden casket.

Do you want to read more stories about haunted places in Asia? Click here.