Eyam is a small village in Derbyshire, England. At a first glance, it is just an ordinary English village, but the history tells another story. In 1665, Eyam made a huge sacrifice to make sure surrounding villages remained safe. It is something that changed the course of a horrific period in English history. Is it because of the sacrifice that makes it so haunted today?

The history of Eyam

Eyam was founded and named by Anglo-Saxons, but the Romans had already discovered its value. Lead was found and heavy mining was the main source of income for a long time. Lead coins have been found bearing the names of many Roman emperors and a large Anglo-Saxon cross (8th century) gives evidence of both era’s. The village was named in the Domesday Books as “Aium”. The mining business went well until the late 20th century. After this, the people of Eyam found a new way to make a living: the tourist industry. Why? Because Eyam is Britain’s Plague Village.

When local taylor Alexander Hadfield purchased a bundle of cloth from a London merchant, he kept it in his shop. His assistant George Viccars noticed the cloth was rather damp so he opened it to give it some air. He didn’t know the cloth was infested by plague-carrying fleas. George died within a week, as well as a few members of his family. The taylor died a few days later and before October that same year, 20 more villagers got infected and died. Something needed to be done immediately.

Referend William Mompesson and the Puritan minister Thomas Stanley convinced the villagers that certain measures were necessary to prevent the spread of the disease. There were three measures in total. The first one was that family members were to bury their own relatives. The second measure was that all church services were relocated to the natural amphitheatre of Cucklett Delph. There was enough space in the open air which reduced the risk of infection. And the third and last measure was the most drastic of all: the village cut itself off completely.

The entire village agreed to the third and final measure. They completely isolated themselves to make sure the disease remained inside Eyam. Surrounding villages made sure the 800 people of Eyam were provided food and medicine. The villagers would leave coins inside holes that were made in stones, like in the massive Coolstone. They would fill these holes up with vinegar to disinfect the money. The others would leave the food and medicines at the stones. They were not allowed to go behind the stone boundaries.

The aftermath of the plague

The outbreak of the plague in Eyam lasted for 14 months. At least 267 of the 800 villagers died from the disease. Some families, like the Talbots, were completely wiped out. Poor Elizabeth Hancock survived her husband and 6 children. They died in a time span of 8 days. She buried all of them but remained untouched by the illness herself. Their graves are now known as the Riley graves, named after the farm where they lived. And poor Jane Hawksworth lost 25 members of her family. She also remained healthy. Many of the descendants of these families still live in Eyam.

Why some didn’t get infected

Even though many of the Eyam people came in close contact with the disease and handled the burial of relatives themselves, not everyone got infected. Not even the village’s unofficial gravedigger Marshall Howe. Studies show that some remained fine because of a particular chromosome. This groundbreaking evidence became of great value.

Places of interest in Eyam

There are several places in Eyam that just need to be visited while you’re there. The Anglo-Saxon cross and the Coolstone cannot be missed, but also the plague cottages and the grave of Catherine Mompesson. She was the wife of Referend Mompesson and she remained by her husband’s side while her other family members left the house. She died of the plague in the very last days of the illness. Each year, on Plague Sunday (celebrated since 1866 on the last Sunday in August) a wreath is laid on her grave. And then there is the Mompesson’s well, which is also a tourist attraction. And the church’s burial register records the death of “Anna the Traveller” who, according to her own account, was 136 years of age (December 30, 1663).

Respect for its heritage

Unfortunately, it was not always normal for the people of Eyam to respect its heritage. A fairly large part of the Ango-Saxon Cross was broken up for domestic use. The two lime trees planted on either side of Mrs. Mompesson’s grave were cut down for timber and ploughing was allowed around the Riley Graves. And some of the plague victims gravestones were pulled up to floor houses and barns. Perhaps that’s why the village is so haunted?

The ghosts of Eyam

Yes, Eyam is haunted. But not just by victims of the 1665 – 1666 plague. There are a few places that stand out when it comes to ghosts.

One of the most haunted locations in Eyam is the Miner’s Arms. This pub dates back to 1630 and originally called the King’s Arms. People have heard footsteps and some have experienced strange occurrences in the bedrooms. Some even fled their room in the middle of the night.

Some of the original cottages are still in Eyam. You can visit them and a plaque will tell you which family it used to belong to. One of these cottages is haunted by an elderly woman. She has a friendly face and wears a blue smock. She is reported to wake people up in the middle of the night.

One of the biggest buildings in Eyam is Eyam Hall. It used to belong to the Wright family and it was built between 1671 and 1676. The ghost of a woman named Sarah Mills is often reported here. She was a young servant who drowned in the well. She never left Eyam Hall. She’s not the only ghost that haunts this mansion. The ghost of an old man was seen so often in a room upstairs, that it is now permanently locked. 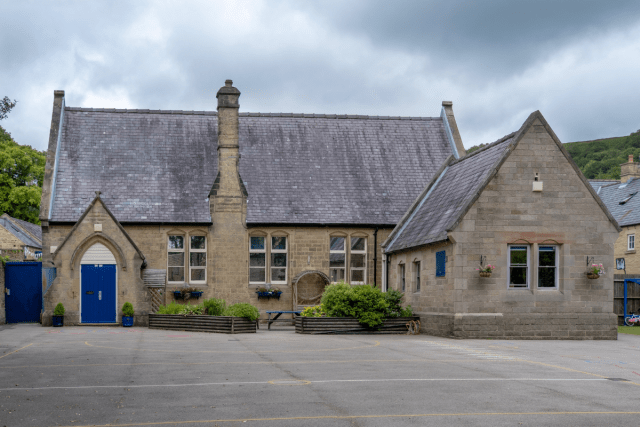 The village of Eyam is normally open to the public and ghost tours are given daily. Because of the Covid-pandamic it’s important to check the latest measures. What a story!