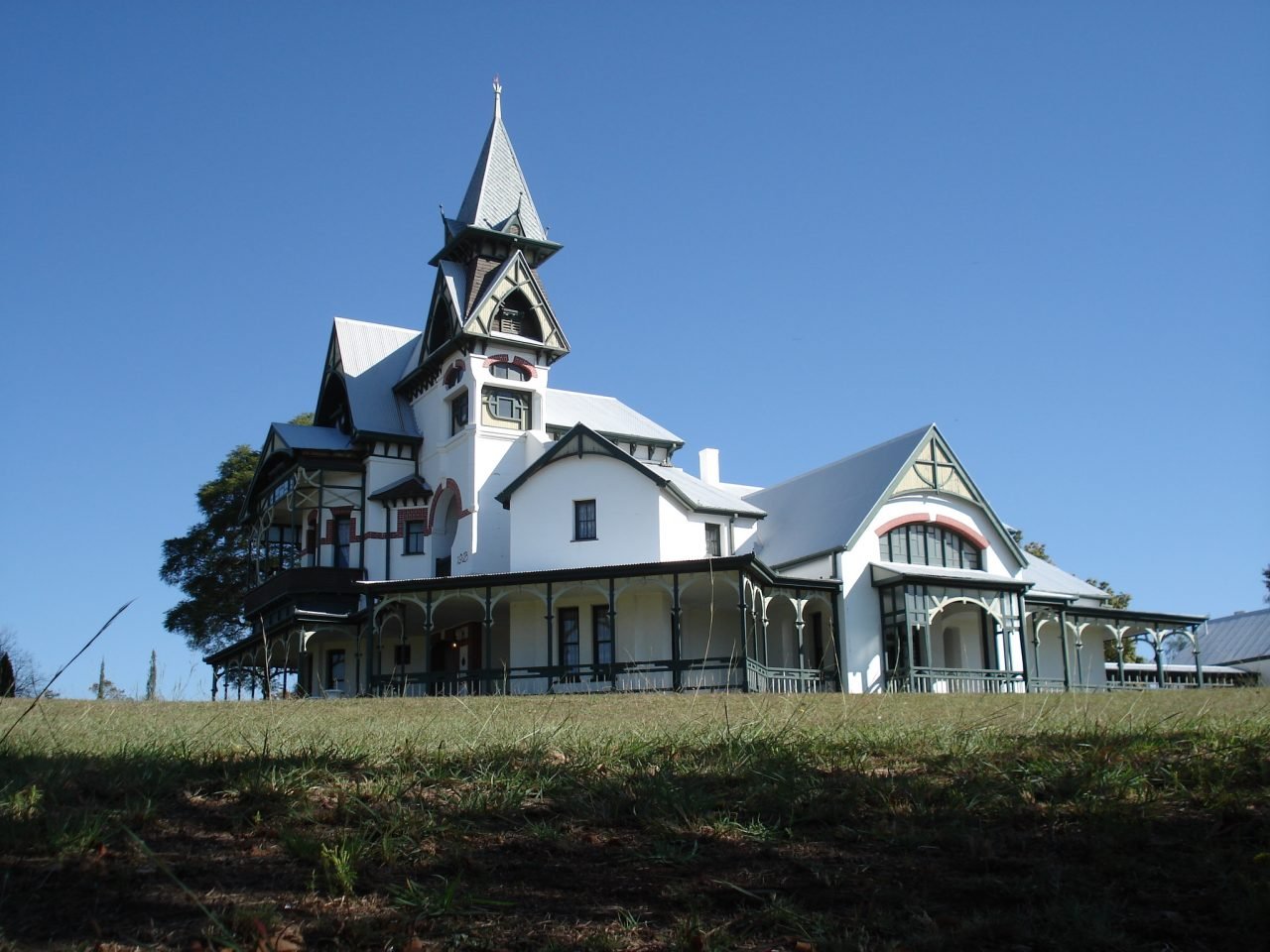 Erasmus Castle, or in Afrikaans “Erasmus Kasteel“, is located on a hill in the Erasmuskloof, Pretoria, South Africa. It overlooks the entire area and is of great historical importance. Today, it’s owned by a company named Armscor and tours can be booked by appointment. The imposing mansion is also referred to as Die Spookhuis, or like they say in English “The Haunted House”. And that’s not just a nickname.

The history of Erasmus Castle

Jochemus Johannes Petrus Erasmus (1863 – 1940), a successful South African farmer, wanted to build a mansion on top of a hill overlooking his land. The construction of the house started in 1892 and it was finished in 1903. He lived there with his wife Johanna and their children. The house was designed by Frans van der Ben, a Dutch architect. A small family cemetery can be found on the land as well. The house isn’t just a historic landmark near the cross-section of the N1 and R21 highways, but the entire hill is of historic importance.

Erasmus Castle stands on a piece of land where a cave is also situated. Several pre-colonial artifacts were found in this cave, like San artifacts dating back 150.000 years. Turquoise beads dating back to the traders from ancient Phoenicia (2500 – 539 BC) were also discovered in the cave. On the land itself a well-preserved house from the Voortrekker period (around 1836) stands. It has a historically accurate cow dung floor.

The Voortrekker period (English: The Great Trek, Afrikaans: Die Groot Trek) was an eastward migration of Dutch speaking settlers/pioneers who travelled the South African lands by wagon trains. They started at the Cape Colony, moving inland to start a life beyond the Cape’s British colonial administration. So, it was not just the VOC (Dutch: Vereenigde Oostindische Compagnie, English: Dutch East India Company) who brought Dutch influences on the South African vocabulary. For Dutch people, like me, it’s weird hearing your own language so far away from home. Even though Afrikaans is different than Dutch.

The Erasmus Family was a powerful family in South Africa. They were influential landowners and they had many places named after them, like Erasmusrand, Erasmuskloof, Erasmia and Elarduspark (Elardus was a common middle name in the family). But being rich and influential didn’t mean you got to live happily ever after. On the family cemetery, you’ll find the grave marker of a small child. The child’s name was Enslin and died in 1917 at the age of three. The words on the grave “Onze Zonnestraaltje” meaning “our little sunbeam”, indicate how much the child was loved.

The ghosts of Erasmus Castle

Many rumors and legends surround this mansion, including the legend that two of the Erasmus children were locked in the tower because they had leprosy. That is just a legend, but there have been many supernatural encounters at the house that many validate. A woman dressed in a Victorian nightgown has been seen on several occasions. Sometimes in the garden, sometimes looking out of one of the windows. Footsteps are heard, taps are turned on and lights are turned off. The apparition of a gentleman sitting in an armchair has been seen by many as well. He doesn’t respond to any questions; he just sits there. Also, the ghost of a young girl has been seen at the house. Perhaps this is the spirit of Enslin? Did the hauntings begin after the new owners re-located the vandalized family cemetery? Who knows!

Jochemus and Johanna’s wills made it nearly impossible for surviving family members to live at the house. So, after they died, the house fell in despair. It even started looking like a haunted house. The house was almost demolished when the Pretoria Municipality wanted to put a highway right through the lands in the late 1960’s. When these plans were cancelled, Armscor (Armaments Corporation of South Africa) bought the mansion and the surrounding farms in 1975 to turn into their office. They renovated the house back into its original state, relocating two neighboring farms and, as I said before, the family cemetery. Although it’s in private hands now, visitors can come over to have a look. Tours are available. They did a great job restoring the mansion and it’s a beautiful place indeed!

Do you want to read more stories of haunted places in Africa? Click here!