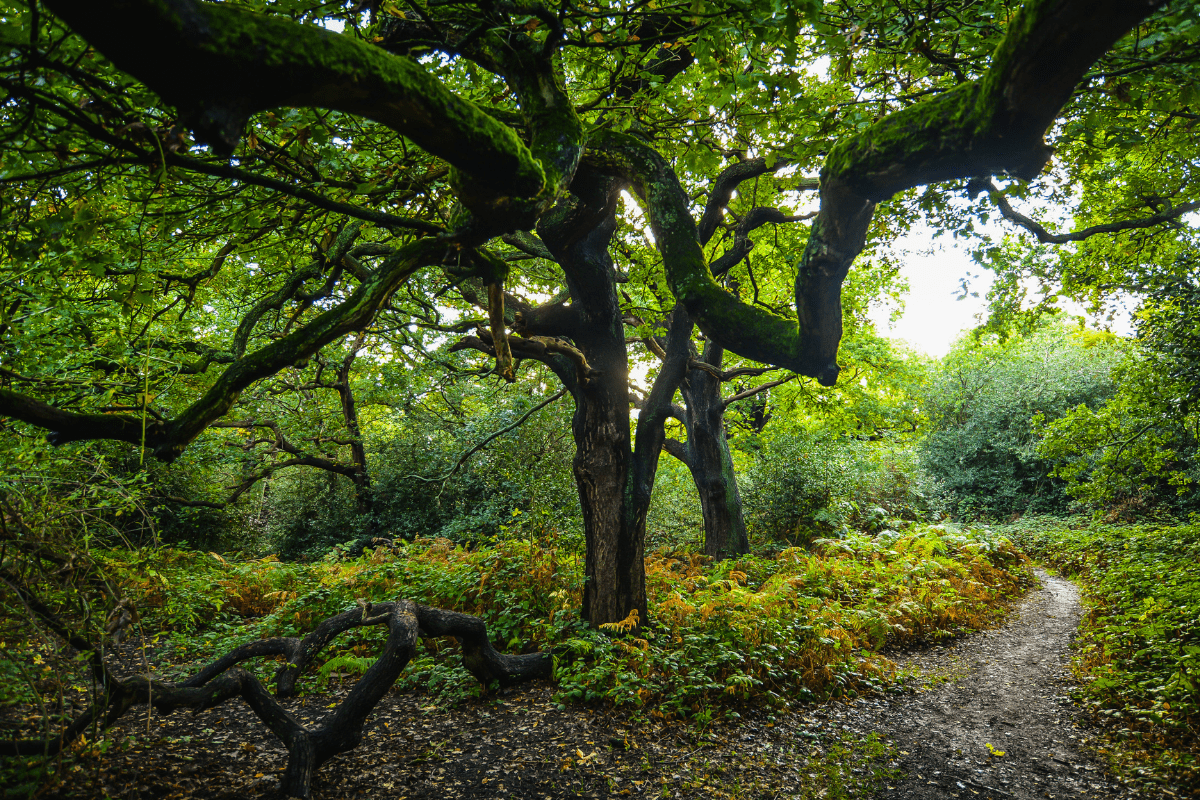 Less than an hour’s drive away from London, you’ll find Epping Forest. This ancient woodland stretches from London to Epping, Essex. It lies on a ridge between the rivers Lea and Roding and is the perfect place to spend a Sunday out with the family. But, the “People’s Forest” also has a dark side…

No one knows exactly how old Epping Forest is, but the discovery of two Iron-Age earthworks tells it’s centuries old. The name Epping Forest was first recorded in the 17th century. Before that, it was part of the larger Waltham Forest. During the Anglo-Saxon period, a lot of the original woodland was cut down. Even though this is tragic, it also ensured that other tree species were able to grow here. For instance, the beech-birch and oak-hornbeam trees. Cutting the trees for timber used in the shipbuilding industry for the Royal Navy, seperated the part now known as Epping Forest from the larger Waltham Forest. But, there are still 55,000 ancient trees growing in the forest, more than in any other single site in the whole United Kingdom!

The forest contains areas of grassland, heath, streams, bog and more than 100 ponds. Most of these ponds were created for the cattle that was allowed to roam freely through the woods, some are natural and some were created by bomb impacts from the war.

During the 12th century, the forest gained the legal status to become a royal forest by Henry II. This legal status allowed the Crown to hunt deer in the forest and for commoners to use the woodland for gathering firewood and to let their cattle graze. Commoners were not allowed to hunt deer in these woods. It is believed that Henry VIII as well as his daughter Elizabeth I used the forest for hunting. In 1543, Henry VIII even had a building constructed here, known as the Great Standing. This building, which has a great view on Chingford, was used by Elizabeth I as her hunting lodge. Hence the name: Queen Elizabeth’s Hunting Lodge. Today, the building still stands and is open to the public.

No longer a royal forest

In 1878, Epping Forest ceased to be a royal forest. This change was made under the Terms of the Epping Forest Act of that year. The forest was placed under the care of the City of London Corporation. A Superintendent was hired. This person is responsible for the operational management of the forest. Also, 12 Epping Forest Keepers were appointed. The Terms also terminated the Crown’s right to venison and the pollarding of the trees was no longer allowed. The right that allowed people to let their cattle graze in the forest still remains. In 1882, Chingford was visited by Queen Victoria. She later declared the forest to be for the enjoyment of her people. Even today, people are allowed to take firewood from the forest. But, there are rules, so check them before you go.

As mentioned before, Epping Forest was used as a place for deer hunting. The ancient tradition of the Easter Monday Stag Hunt officially ended in 1807, but the tradition was continued until 1882. A riot which had to be ended by the police, eventually ended the tradition. The population of deer increased in number again. The surprising thing about Epping Forest is that it’s populated by black deer (Fallow deer). The more common red deer (Roe deer) haven’t been seen in the forest since 1920.

Legendary highwayman Dirk Turpin found refuge in the forest in the 18th century. This was also his hunting ground. He targetted the carriages of wealthy people. He was born in Hempstead in 1705, but opened a butcher’s shop in Buckhurst Hill. At some point, he was involved in the very violent Gregory Gang. When he eventually left the gang, he became a highwayman. His favorite area in the forest was that of Loughton Camp. It is believed that Turpin killed at least one man in Epping Forest. If you want to know more about Dirk Turpin you should really check out the story about the Ostrich Inn. Highwayman Tom King, who sometimes worked alongside Turpin, also used the forest as his hideout.

A dense and large forest such as Epping Forest is the perfect place to make things disappear. Like people. Through the years, the bodies of several people were found buried in the forest. And several murders took place here, too. Since the 1960’s, more than a dozen murder victims were discovered. One woman was found dead in her car with the arrow of a crossbow in her head! Tripple policeman murderer Harry Roberts hid out in the forest for a short time before being arrested in 1966.

The ghosts of Epping Forest

Apart from the fact that Epping Forest is indeed haunted, it’s also truly haunting. Since pollarding is prohibited, the trees have been able to grow in grotesk forms. It can be pretty eerie here, especially at night. But, like I said, the forest is also reputedly haunted.

The ghost of Dirk Turpin

It is widely believed that the spirit of Dirk Turpin haunts the forest. He was hanged in Knavesmire (York) on April 7, 1739. After his execution, Turpin’s body was exhumed by a local laborer and sold to a doctor. He wanted to dissect Turpin’s body. But, this crime was discovered and an angry mob protested outside the doctor’s house. The doctor and the laborer were both arrested and fined. Turpin’s body was buried again, this time for good. You can find Turpin’s grave in St. George’s Churchyard in York. Although the headstone didn’t appear until two centuries later. Perhaps the fact his body was snatched unables Turpin to find rest. He’s known to haunt the Loughton Camp area, a place known for paranormal activity.

The site of Loughton Camp has been used as an army base by the tribal queen Boudica. Many people sense the energy of the long-gone soldiers. Boudica was the queen of the British Iceni tribe who led an uprising against the conquering forces of the Roman Empire in 60 or 61 AD. She was either killed in battle or she died due to her injuries. Boudica is considered a British folk heroine. In the area, people have heard the sounds of drums and marching soldiers.

In the 1960’s, visitors of the forest saw two figures emerging from the pond near Lindsey Street. The two figures were on horseback. They rode in the town’s direction but disappeared in front of the eyes of the visitors. Another pond, deep in the forest, is said to draw people to commit suicide in its dark waters. Legend says that 300 years ago, this pond was the scene of a tragic murder-suicide of two young lovers.

A place which is named Hangman Hill is bound to be haunted. According to a local legend, the spirit of a hangman lurks here. He is known to drag cars uphill. It is said to happen if you park your car in neutral. But, this phenomenon might be caused by an optical illusion: the road might only appear to slope upwards. It’s a great story, though. There are claims of people hearing terrified high-pitched screams in this area. That’s already scary enough.

The apparition of a headless man has been spotted by several people at the Wake Arms round-about. He appears to have been a biker. Also, a horse-drawn coach has been seen here. Another headless apparition, a horseman, is known to haunt near the Kings Oak pub. The ghost of a little girl who drowned near the pub is regularly seen here, too. People have also reported being touched and even pushed by unseen hands in some parts of the forest. This place truly is haunted!

Epping “the People’s” Forest is a much-loved place for family walks and picnics. There is a wide variety of leisure activities such as rambling, cycling, and horse riding in the forest. For horse riding: riders need to be registered with the Epping Forest Conservators to be allowed to ride here. It’s very popular among mountain bikers. In 2014, Stage 3 of the Tour de France passed through the forest from Epping to Buckhurst Hill. The cyclists used the Epping New Road which was built in 1834. Would you dare to spend your Sunday afternoon here?

Do you want to read more ghost stories about European places? Click here!

Moosham Castle or Schloss Moosham is a medieval castle in Unternberg, region Salzburg, Austria. The so-called spur castle is located on a high point, overlooking the entire area. Building fortifications on top of mountains and hills was done for defense purposes. The castle was involved in at least 45 bloody battles. But the battles are […]
Golden Gate Park can be found in the center of San Francisco. The park is even larger than New York’s Central Park. It was founded in 1870 and is a much loved getaway for locals and tourists. The park offers many attractions such as a museum, a Japanese tea garden and a beautiful botanical garden. […]
In 2019, right before the Corona pandemic, we visited Edinburgh. When we first arrived in the city, it was raining heavily. Wanting to make the most out of the trip, we decided to take a ghost tour that same night anyway. Thank goodness the weather improved as we approached the night. We did the Doomed, […]
In the English town Warwick in the county Warwickshire, you can find the imposing Warwick Castle. The original fortress was built in 914, so you can imagine that there’s a lot of history here. It served as a stronghold, a residence and a prison. The castle is a much-loved and popular tourist attraction. And some […]