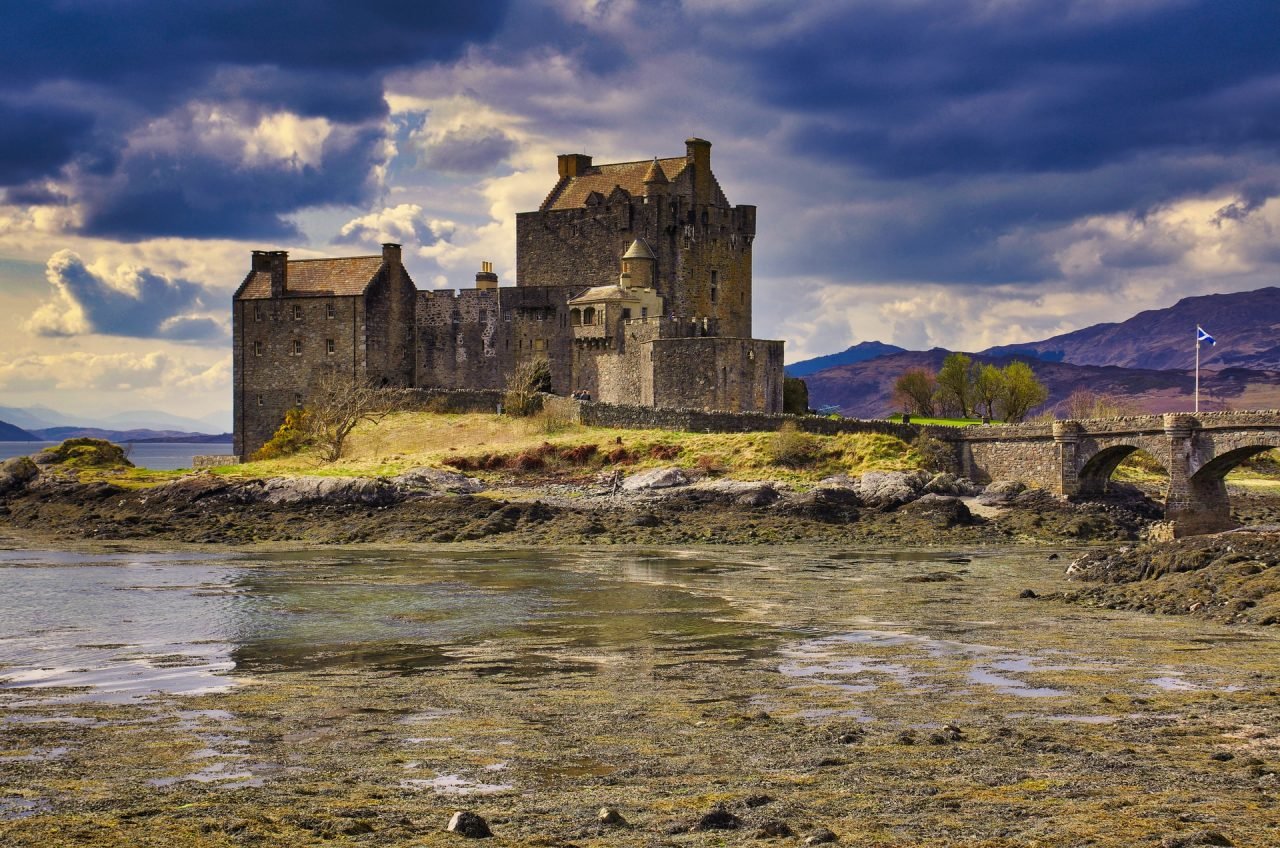 Eilean Donan Castle is located on Eilean Donan, which is the Scottish-Gaelic word for Donan Island. The castle is perhaps the most photographed castle in Scotland. After the castle was partly destroyed, it was abandoned for a long time. But a descendant of the original family decided to restore it. The castle is haunted, but the island itself has a few myths of its own.

The island is named after the Irish bishop Donan, who formed a community on the island around the year 580 AD. The island had residents before; remains of a fortress which dates back to the Iron Age was found there. Eilean Donan Castle wasn’t built until the 13th century to defend itself against the Vikings.

The history of Eilean Donan Castle

The North of Scotland and the western isles formed a separate “sea kingdom”. The sea kingdom was named The Lord of the Isles and the sea was the main highway. Protection was necessary. Eilean Donan Castle was placed strategically on its own, little island. The castle overlooks the Isle of Skye and is surrounded by mountains and forests. Alexander III gave the castle to Colin Fitzgerald in 1263. He was the son of the Count of Desmond and Kildare, both part of the Lord of the Isles. Colin Fitzgerald earned the castle for his service during the Battle of Largs. His later descendants were part of the MacKenzie clan.

In 1504, Alexander Gordon, Count of Huntly, tried to take over the castle in the name of Jacob IV. He failed. The walls of the castle are 14 feet thick, so it was difficult to attack. Around 1509, the castle was appointed to the MacRea clan by the MacKenzies. The MacReas were the bodyguards of the MacKenzie clan. In 1539, the castle was again under attack once more, this time by Donald Gorm MacDonald, Lord of the Isles. He attacked with 400 men and no less than 50 ships. Duncan MacRea was able to defend the castle and mortally injure MacDonald.

In 1719, during the Jacobite Risings of the 17th and 18th century, a group of 46 Spanish men turned the castle into their headquarters. They were supporters of the Jacobites and stored the entire castle with ammunition and gunpowder, planning an uprising. Their plans were soon discovered, and the English Captain Boyle attacked these 46 men with his three ships: The Worchester, The Enterprise and the Flamborough. The fight was tough, due to the thick castle walls and lasted for three days. The Spanish men thought they were safe, but they were wrong. The English discovered the huge amount of gunpowder and decided to use it against them. They blew up a large part of the castle where the 343 barrels of gunpowder were hidden.

After this, Eilean Donan Castle was left to ruin for nearly 200 years, until Lt-Colonel John MacRea-Gilstrap bought it in 1913. Along with Farquhar MacRea, he started rebuilding the castle using a surviving floor plan. They also made a bridge which connected the island to the mainland. The restauration took over 20 years. It’s been open to the public since 1928. This is also when the first ghost was seen.

The ghosts of Eilean Donan Castle

Even though the castle has seen a lot of violence through the centuries, the amount of ghost stories is a bit disappointing. I mean, according to historical facts, 50 men were executed on the castle grounds in 1331 and their heads were spiked onto the walls. You’d expect tons of ghosts there. But only two ghosts are reportedly seen. One of them is the creepy ghost of a Spanish soldier. He has been seen on the spot where today the gift shop is located. He is seen carrying his own head, tucked under his arm. Also, the ghost of a lady is seen in one of the bedrooms. Some claim this is the spirit of Mary, Queen of Scots, although she has been seen on other locations (such as Stirling Castle and Borthwick Castle) as well. But there is a lady ghost up there, whoever she was.

Other myths and legends of the island

Eilean Donan is an isolated island, in the middle of three sea lochs. Misty weather can easily play tricks on the eyes, so there are several legends and myths that involve the island. One of the lochs, Loch Duich, has its own Loch Ness-like creature. Since this is a sea loch, the reptilian neck of the monster, could also be the dorsal fin of a killer whale. But who knows was lurks in the deep of Loch Duich?

Eilean Donan Castle is said to be built on top of the Otter Kings burial grounds. That’s right, the furry brown creatures. Legend says, that when an Otter King dies, his coat made of pure silver and white, was buried on Eilean Donan. Some historians claim that Eilean Donan had nothing to do with a bishop named Donan, but that the name came from the Gaelic word Cu-Donn, which means “brown dog” or “otter”. Who shall say?

Another legend of the island is a legend told by sailors, who believed the island was home to mermaids and seal maidens. Seal maidens were able to shapeshift into humans if they cast off their seal skin. With these skins they were able to return to sea. But, if the seal skin was lost or stolen, the creature was doomed to remain in its human form forever. If a human were to find a seal skin, he or she could hold the maiden captive.

The legend of the three brothers

According to a local legend, three brothers went fishing in the loch one night. They spotted three seal maidens who came to land, shed their skins off and danced in the moon light. The three brothers instantly fell in love and decided to steal the skins. They claimed the seal maidens as their wives. The youngest brother felt sorry for his wife because she was so very sad she couldn’t return to the sea, that he decided to give her the skin back. As a reward for his kindness, he was permitted to see the love of his life on every ninth night. The middle brother’s wife found her own skin back and escaped back to sea. The eldest brother was struck by tragedy. He tried to burn his wife’s skin but ended up burning her accidentally as well.

The location of the castle is simply breathtaking, and that’s probably why Eilean Donan is the most photographed castle in Scotland. If you’re in the area, you should visit it. Unfortunately, it’s not allowed to take pictures inside the castle. There are guides in each room who love telling you all about the castle’s history. The castle has been featured in films like Highlander, Entrapment, Loch Ness, and the James Bond movie “The world is not enough”. It’s also part of the popular Netflix series Outlander. So, book your tours!