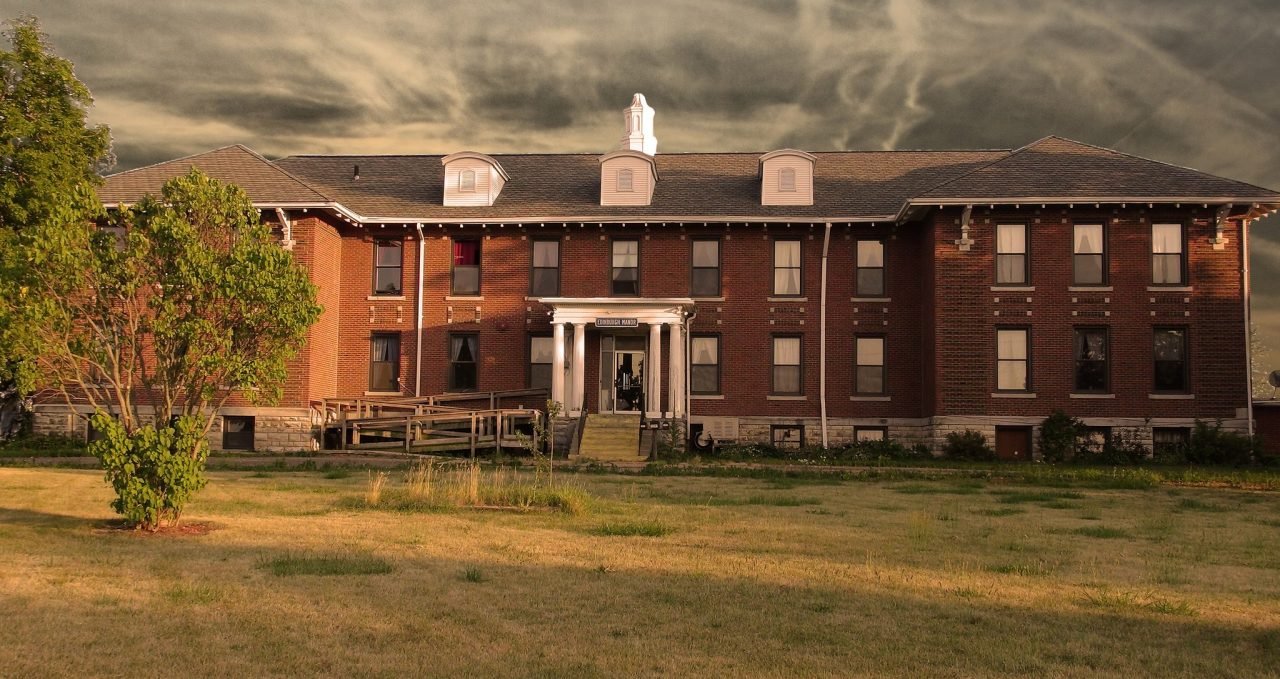 In Jones County, Iowa, you can find the massive Edinburgh Manor. The town of Edinburgh was supposed to become Jones County’s county seat, but these plans were changed. The land bought for the future courthouse was given another purpose: a poor farm was built on it. It is said that over 150 people died in this poor farm, making this one of the most haunted places in the USA.

To understand the history of Edinburgh Manor, we should go back to 1850. Then, a building was constructed as a “comfortable retreat for lazy, able-bodied and willingly dependent applicants”. Poor farms were common those days. The idea was that the poorest people would be provided with shelter and food in exchange for labor. The problem was, that not only the poor people were taken in. Also disabled and elderly people who had no family were taken in. And they were forced to share their residence with incurable insane people.

Some “inmates” as they were referred to, were discharged and left the facility. But, most of the residents died at the poor farm. The dead were released back to their families. If a deceased person had no family or wasn’t accepted, he or she was buried in a pauper cemetery on the property. There are rumors that some bodies were buried on other spots of the estate.

The history of Edinburgh Manor

The poor farm was eventually closed and even demolished in 1910. This was the period in which Edinburgh Manor was built. Construction was completed in 1911. Then it opened its doors to the insane, disabled, poor and elderly once more. Edinburgh Manor was in operation until November 2010. By then, the Community Care stated that the manor was unsuitable for inhabiting any longer. The patients were transferred to a new hospital and Edinburgh Manor was abandoned. Later, plans were made to turn it into a Bed & Breakfast, but too much work had to be done to make the property safe again. The new owners, Cindy and her husband, wanted to restore the property back into its former glory. While they were working on it, they experienced strange occurances. In 2012, they decided to open the facility for paranormal overnight stays and daytime tours.

Edinburgh Manor is rumored to be the most haunted building in the Midwest, perhaps even in the entire country. Of course, the documented deaths are one of the reasons why there is so much paranormal activity. But, don’t forget that asylums and places similar to the Manor, as it is often referred to, weren’t a happy place. Overcrowding, lack of personell, people being restrained in order to manage them, sexual assault. These are just a few of the issues that made the management decide to shut the facility down in 2010. And suddenly, too! All the personal and medical files were left behind. People’s personal belongings such as clothes, toys, you name it! It’s all still there. The owners never moved the things away. I’d say there are enough trigger objects around to get an entire ghost army on its feet!

The ghosts of Edinburgh Manor

The ghosts of Edinburgh Manor don’t only walk the corridors at night. During the daytime tours, people have heard giggling, footsteps and have even seen full body apparitions. There are many recorded EVP’s and Edinburgh Manor’s website even holds some ghost pictures you can watch. A couple of ghosts have been “identified”, so let’s zoom into them. The Manor is a huge building to cover when you go on a paranormal investigation. It’s 12,000 sq ft (1115 m2) big, it has two floors and a basement. So let’s take it floor by floor.

The first floor is haunted by several spirits. One of the spirits is that of a sweet and playful girl. She’s singing, laughing and running down the hallways. She likes playing with the toys in room 106. She’s been named “Susie”, and she told some paranormal investigators that she was “just dropped off there”. The second spirit on the 1st floor is the spirit of a man. He resides in room 121, but he has also been seen walking down to room 108. It is believed that this man committed suicide in what is presently known as the Janitor’s closet. He hanged himself with a sheet from the inside door knob. Room 105 is a room where many have a “bad feeling”. It is believed that this one was the scene of a very brutal rape. Paranormal activity in the form of EVP’s has been recorded here, too.

While the current owner spent a night in room 200, he felt as if someone was squeezing his big toe. Later, when his nephew and a friend investigated the room, they got an interesting EVP saying: “I grabbed you”. A woman dressed in a white dress has been seen at the top of the stairwell quite often. She disappears when people see her. Her spirit is always seen between noon and 2 pm. A white mist was seen near the ceiling at the exact same location. In room 204, a toy fire truck has been seen moving. It even shows up in other rooms on this floor.

The basement is haunted by two male ghosts. One of them is the ghost of a tall man wearing a brown cowboy hat and a long duster coat. He always appears between noon and 2 pm, like the woman white on the second floor. The basement doors leading to the staircase have the tendency to open and slam shut on their own. The owner’s dog is also drawn to the lower floor’s staircase for some reason. The most famous resident ghost resides in the basement. He is nicknamed the Joker, but he’s not as innocent as his name sounds. The Joker is quite malevolent.

He touches people, leaves marks on people, and he tends to throw dishes to the floor in the basement dining room. The Joker has been described as a tall and slender man with a crazy smile on his face. He wanders between various rooms, but is most often seen in the padded room (which is no longer padded, but is still referred to this way). He is believed to have committed suicide in this room by hanging himself. Perhaps that’s why people have trouble breathing in the basement and most marks appear on people’s necks.

Ghost day tours and overnight ghost tours are provided by the owners of the Manor. Several other paranormal investigation groups are allowed to organise tours here, as well. Perhaps you will encounter one of the many spirits that reside here. Be sure to make an appointment before you go. Reservations are obligated. Would you dare to stay here at night?

If you want to read more ghost stories about haunted places in America: click here!

A big THANK YOU to Edingburgh Manor for allowing me some of the pictures used in this story.