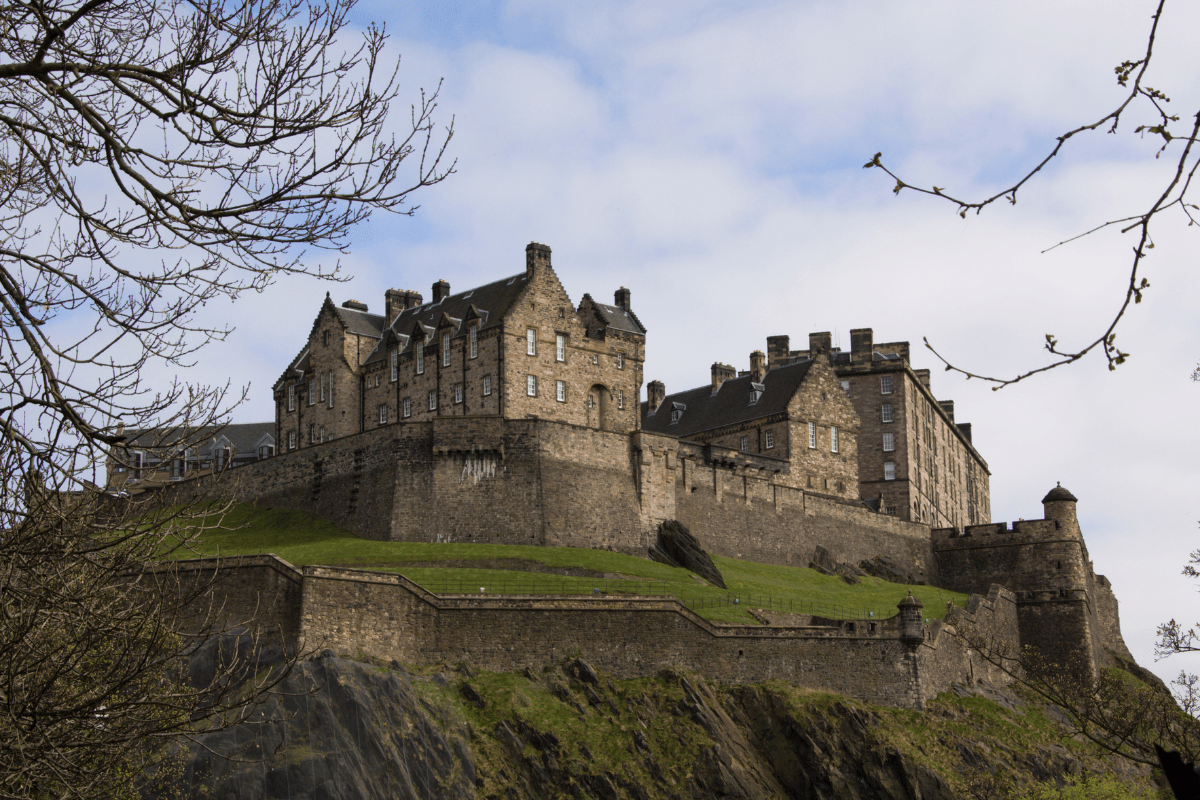 Edinburgh Castle, or Caisteal Dhùn Éideann, is located on top of Castle Rock. The castle overlooks the old town of Edinburgh. Castle Rock was inhabited as early as the Iron Age, but didn’t become a fortification until 600 AD. The Scottish Crown Jewels are kept at Edinburgh Castle as well as the Stone of Scone, or the Stone of Destiny. This stone was used to crown new monarchs in the Middle Ages.

The history of Edinburgh Castle

The history of Edinburgh Castle has been very turbulent. Like Stirling Castle, Edinburgh Castle was a residence of kings and queens, and therefore targeted several times by the English. Here’s a brief timeline of the most important historical events: 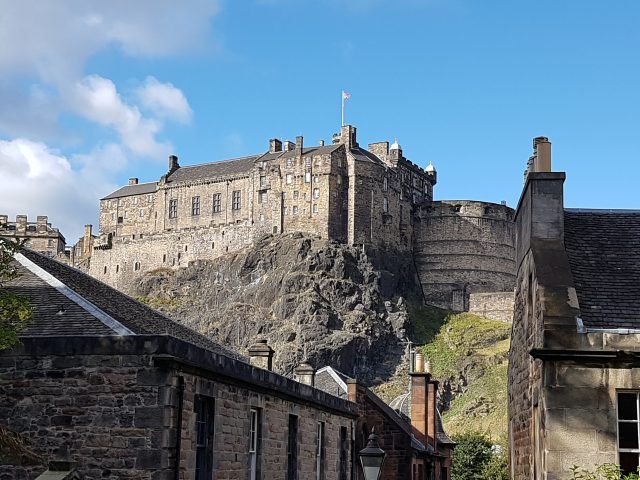 1296 – King Edward I from England claims Scotland
1314 – Thomas Randolph, 1st Earl of Moray, recaptures the castle in a surprise attack. His cousin, Robert the Bruce, King of Scots (1306), destroys the castle in such a way that the English can no longer use it. Only a small chapel remains. The castle was abandoned for twenty years.
1335 – Once again the castle is taken by the English
1341 – Edinburgh Castle was reclaimed by Sir William Douglas. He and his soldiers dressed up as merchants and just walked in. About 100 English soldiers literally lost their heads.
1400 – King Henry V of England attempts to reclaim the castle, but fails
1640, 1650, 1686 and 1745 – England keeps trying, but time and time again they fail. Each time, a new building was added and this is how the Edinburgh Castle as we know it, was built 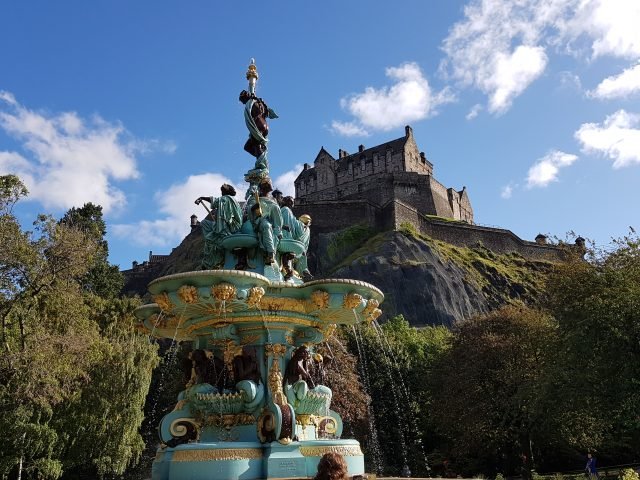 If you like to know more about the history of Edinburgh Castle, please read the story about Stirling Castle. The timeline nearly runs parallel. This castle is so incredibly haunted, that we really should be talking about that instead.

The ghosts of Edinburgh Castle

The city of Edinburgh is one of the most haunted cities in Europe. Bloody battles, witch hunts, the Black Death, it has seen it all. If you’re interested, you should also read the stories about Mary King’s Close, Greyfriars Kirkyard, the Tolbooth Tavern, the Edinburgh Vaults, and Holyrood Palace. Any paranormal investigator will love it here! Let’s zoom into some of the brutal incidents that make this particular castle so haunted.

King James II was only a child when he succeeded his father. It was customary for a regent to be appointed to advise and educate the boy-king. James II had no less than three regents: Archibald Douglas, 5th Earl of Douglas, Sir William Crichton, and Sir Alexander Livingston of Callendar. Archibald Douglas died in 1439, and was succeeded by his 16-year-old son William Douglas, 6th Earl of Douglas. James Douglas, Earl of Avondale and William’s great-uncle disagreed. He wanted to end the mighty power of the Douglas Earls at court.

So, James II was asked to throw his friend William Douglas and his younger brother David a banquet in Edinburgh Castle. Crichton and Livingston had conspired with James Douglas at that point. When William and his brother arrived at the banquet, a bull’s head was served. Receiving a “Black Bull’s Dinner” or a “Black Dinner”, symbolizes the death of the main guest. Both brothers, William and David, were beheaded in the hall where the banquet was supposed to take place. Poor James was in tears, but could do nothing for his friends.

The most frequently sighted ghostly figures at Edinburgh Castle are the Headless Drummer, the Ghost Dog and the Bagpiper. There’s an entire underground system of tunnels right below the castle. When the tunnels were discovered a few centuries ago, a bagpiper was sent down to explore them. To be able to navigate above ground, the piper continuously had to play the pipes. When he was halfway the Royal Mile the music suddenly stopped. When a rescue team was sent down to find the poor man, no trace of him was found. He simply disappeared! Today, bagpipe music is heard frequently underneath the castle and the source is still untraceable.

The ghost of the Headless Drummer Boy was both feared and loved by those living in Edinburgh Castle. When this spirit was spotted, they knew a war was imminent. This enabled the people to prepare for battle. The Headless Drummer Boy was last seen in 1745, but the sound of his drums can be heard even today. No one knows how the boy died, but it’s likely that a cannon ball cost him his head.

Ghosts in the dungeons

Edinburgh Castle was also used as a prison and prisoners were kept in the dungeons. This was a place of torture, pain and misery. Many orbs and strange light anomalies have been captured on camera by many tourists. Once there was a desperate prisoner who wanted to escape so badly he had snuck into a dung barrel. He probably hoped to escape once the barrel was emptied outside the castle gates, but he wasn’t so lucky. The barrel he was in was emptied from the highest point of Castle Rock. Below there were sharp rocks, so when the barrel was emptied, the man was killed. His sudden death keeps him at the castle. There are claims of visitors who felt as if someone tried to push them off the hill.  When they looked behind them, they saw nobody, but they do smell the pungent smell of dung.

The square in front of Edinburgh Castle was used to burn alleged witches. The ghost of Janet Douglas, Lady of Glamis, seems to be strongly attached to the place. She was imprisoned for poisoning her husband and plotting to murder King James V. The King’s soldiers tortured her staff and their “accusations” led to her conviction. King James V was convinced of the fact that Janet Douglas was a witch and she was burned at the stake on July 17, 1537. You can find more information about this historic event by reading the story about Glamis Castle. Her restless soul still roams the terrain and knocking sounds are heard from the place where the platform of the stake used to be. These sounds could also be caused by others who had been burned as witches.

Within the walls of Edinburgh Castle, a small pet cemetery is located. Here, the ghostly figure of a black dog has been spotted. It is believed that this dog was a royal watchdog. For some reason the dog keeps doing what he was trained for: protecting the castle and its owners.

There’s even scientific evidence of paranormal activity at Edinburgh Castle. Psychologist Dr. Richard Wiseman did a scientific experiment at the castle with 240 volunteers. These volunteers knew nothing about the castle and stayed here for ten days, day and night. The results were amazing. All volunteers had experienced strange and unexplainable phenomena. They were able to point to places where the energy levels were different and bigger. These were the places where historically big events had taken place, such as the Black Bull’s Dinner. They experienced sounds of footsteps and breathing while no one was around, some saw shadow figures and some were touched by unseen hands. There’s no doubt there’s something there!

Edinburgh Castle is one of the most popular tourist attractions of Edinburgh. St. Margaret’s Chapel, which was built in the 11th century, has always survived. This makes it the oldest building in Edinburgh. The Stone of Scone, or the Stone of Destiny, is still in the castle. Kings and queens were crowned on it. It’s such an amazing place!