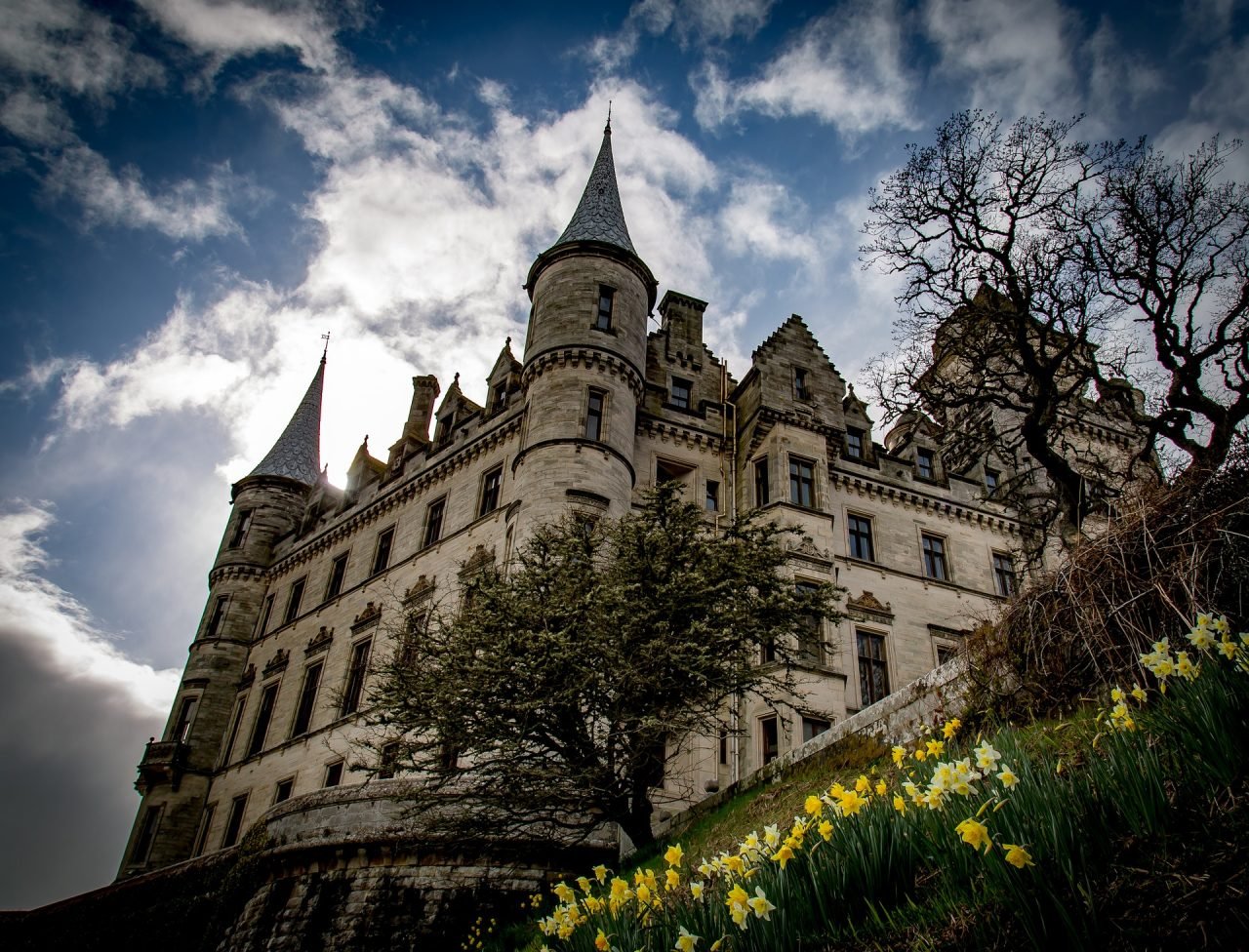 Dunrobin Castle is the most northerly located castle in Scotland. It can be found in a breathtaking place in the middle of the Scottish Highlands. The Sutherland family, one of the seven Earldoms in Scotland, has been living in it for centuries. There’s so much history within the walls of this beautiful castle. No wonder it’s haunted by the ghosts of the past.

The history of Dunrobin Castle

When the 8th Earl passed away, the castle was inherited by Elizabeths older brother, Alexander, but he lost the castle because of a stupid dispute to Adam Gordon. In the absence of Adam in 1518, Alexander took his chance and re-claimed Dunrobin Castle. When Adam found out, he quickly returned and re-captured his castle. Alexander’s head was placed on top of the castle on a spear. But this was not the only bloodshed the castle has seen.

Alexander’s son John didn’t want to give up the family castle, either. He tried where his father failed and was killed in the castle garden. An aunt of the Sutherland’s tried to change the course of succession by murdering the 11th Earl and his Countess in 1567. Even though her plan succeeded, the name Gordon remained. After this incident, it remained calm until 1745, when the castle was attacked and seized by the Jacobites without a warning.

The 17th Earl narrowly managed to escape the castle by climbing from the windows and he fled to Aberdeen by boat to join the Duke of Cumberland’s army. Together they defeated the Jacobites at Culloden Moor and the Earl decided to change his name back to Sutherland. When the 18th Earl died, his one-year-old daughter Elizabeth succeeded her father as the 19th Countess of Sutherland. At first many were against this title, but it was later granted. She later married George Leveson-Gower who became the 1st Duke of Sutherland.

Importance of the Sutherland Family

Being one of the just 7 Earldoms in Scotland made you important enough to even marry into Royalty. One of the Earls married the daughter of King Robert de Bruce and the 12th Earl married Jean Gordon, Countess of Bothwell. She was the ex-wife of the 4th Earl of Bothwell who later married Mary, Queen of Scots. And that didn’t go very well for him as you can read in the story on Holyrood Palace.

Dunrobin Castle started as a fortified square keep with 6 ft thick walls (1,8 m) and a stone vaulted ceiling, which was unusual for that period. Later, stairs leading to a great house were added, and the castle was expanded several times over the centuries. In 1850, architect Charles Barry, who created the Houses of Parliament, added a Victorian touch to the great house and the garden. The design for the garden was inspired by the gardens of the Palace of Versailles in Paris.

The castle even got its own private railway station in 1870! A fire nearly destroyed the castle in 1915 and much of Barry’s interior was ruined. The castle was then used as a naval hospital for WWI victims. When the 5th Duke of Sutherland died in 1963, it passed on to his niece. She turned it into a boarding school for boys from 1965 to 1972. Since 1973, the castle has been open to the public.

The ghosts of Dunrobin Castle

A castle with so much history and bloodshed must be haunted, and it is! Though not by Alexander, nor by John and not even by the 11th Earl of Sutherland and his poor wife. Nor by war victims, either. Then by who? Well, that’s a whole other story.

The ghost of Margaret Gordon

The 14th Earl had a daughter named Margaret. Margaret was promised to the son of another Earl, but she already lost her heart to a stable boy named Jamie Gunn. Of course, her father didn’t approve of the love affair between his daughter and this commoner, so Jamie was banished off the estate. Margaret was locked up in a room in the tower, now known as the Seamstress’s Room. Jamie snuck back in the castle and managed to reach Margaret. He had a plan.

She was going to escape by a long rope so they could run away together. Which seems like a good plan, ended up in tragedy. While Margaret was already hanging onto the rope, they were discovered. Her father demanded her to come back up, but Margaret knew she was never going to be happy without Jamie, so she let go of the rope and fell to her death. Her crying ghost can be heard near her room in the tower to this day.

Part of the castle is still inhabited by the Sutherland Family, but 18 of the 189 rooms, the garden and some public spaces are open to the public. The Seamstress’s Room is not open to the public and it has been sealed off because of poor Margaret. The castle houses a museum which used to be William’s Summer house. It’s now stuffed with trophy heads, shot by members of the family and archeological artifacts which are of great value. The castle is open from April until November and it has its own falconry show. But if the Seamstress’s Room was open, would you dare to spend the night in there?