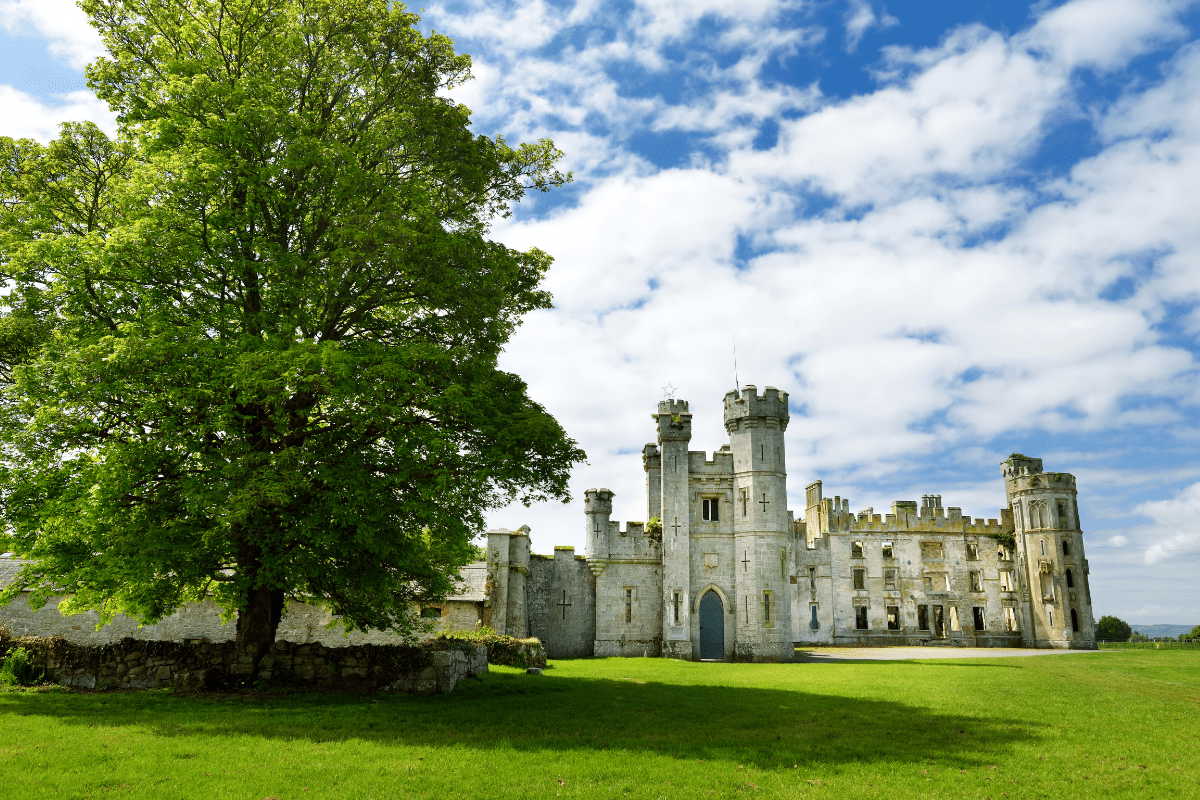 Duckett’s Grove (Irish: Garrán Duckett) is an 18th century manor house in County Carlow, Ireland. It was destroyed by a fire in 1933, but the surrounding gardens are open to the public today. The outside of the mansion still stands, looking medieval and romantic. But, there’s a curse on the manor house which kept the Duckett Family in its grip for years…

The history of Ducketts Grove

Duckett’s Grove was built in 1745 as a two-story Georgian country house for the Duckett family. At the request of John Dawson Duckett, the house was re-designed in 1830 and turrets, arches and ornaments were added. The manor’s estate used to be in the center of a 12,000 acres (49 km2) large area but is now reduced to 5,000 acres (20 km2). The bloodline of the Duckett family can be traced back to William the Conqueror and King Edward I, but in the 17th century, one George Duckett decided to leave England for Ireland. The last of the Duckett Bloodline to live at the manor house was William Dawson Duckett who died in 1908. The house was abandoned when his second wife Maria moved to Dublin in 1916. After she moved, the manor house had several residents until it was destroyed by a fire April 19, 1933.

Legend says, William Duckett had a very young mistress. This young girl was killed in a riding accident on the estate. Her grief-stricken mother cursed the family and the manor house by calling upon a Banshee. Such a curse is referred to as a Piseóg; a curse to bring about death, despair and financial ruin. Legend says a woman once heard the cry of the Banshee and immediately  died on the estate’s grounds. A gardener also heard the cry and found his mother dead the next morning. But the Banshee is not the only entity that resides at Duckett’s Grove.

In 2011, Duckett’s Grove was visited by the crew of the American paranormal television series Destination Truth. They visited the manor on St. Patrick’s Day and caught some unexplained phenomena on tape. They saw strange figures, light anomalies and they heard heavy, hollow sounds coming from the house. But Destination Truth was not the only one to claim strange things. Other people say they saw shadow people, floating lights and orbs and they heard loud bangs from inside the manor. People even claimed to have seen full bodied apparitions. These are believed to be the spirits of members of the Duckett family. William Duckett’s ghost has been seen riding his estate on horseback before vanishing into thin air. There are even some claims of people who saw an entire phantom fox hunting party ready for some action.

The remains of Duckett’s Grove were acquired by the Carlow County Council in 2005. They refurbished the gardens as well as the walled gardens, which are open to the public today. Even though the manor itself is not accessible, there’s a teahouse on the courtyard where you can sit and relax a bit. Hopefully it will be opened to the public completely: ghost hunters can’t wait to explore this manor!