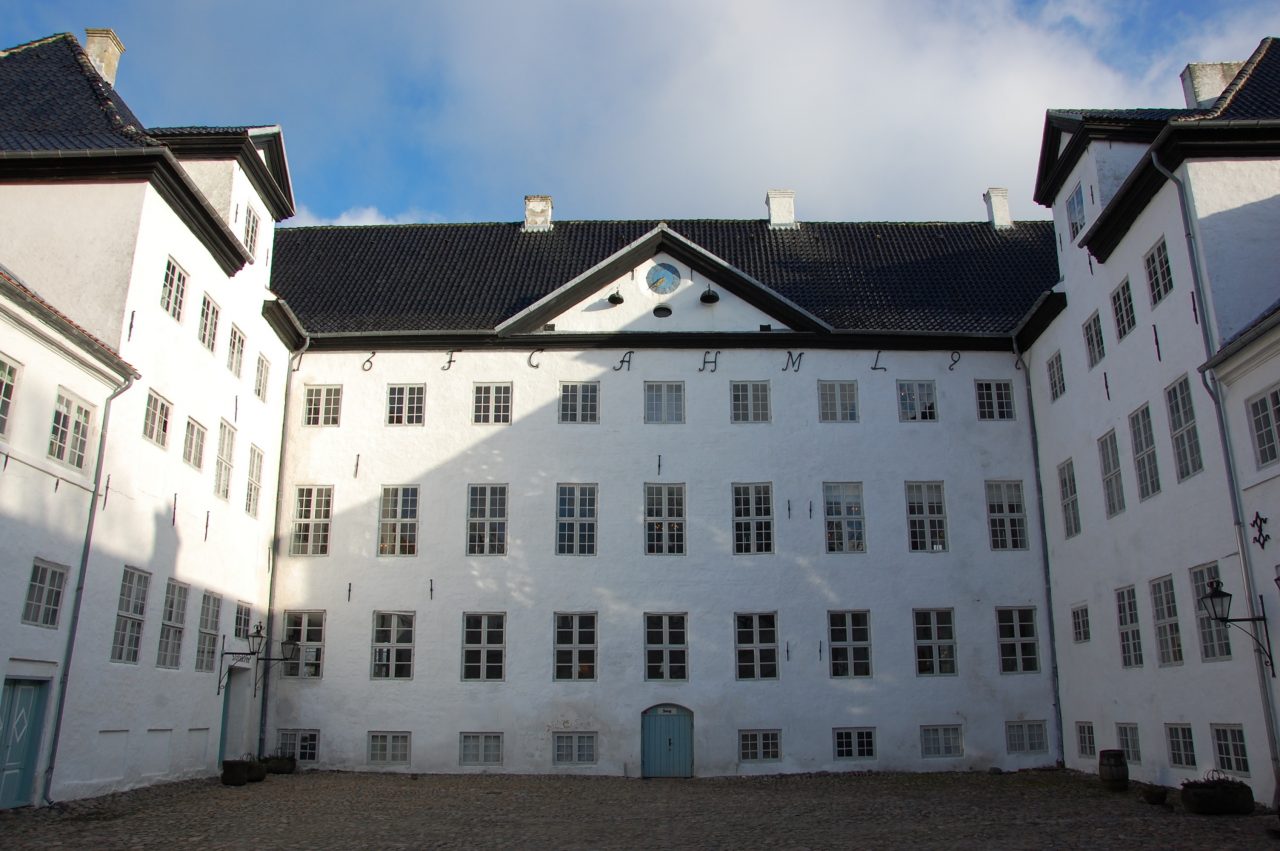 Dragsholm Castle, or how the Danish call it, Dragsholm Slot, is located on the Danish island Zealand, just an hour away from Copenhagen. This beautiful white castle is the oldest building in Denmark. It is now turned into a luxurious hotel, but its history is present in every room. And it’s haunted by many ghosts, some even claim over a 100!

The history of Dragsholm Castle

Dragsholm Castle was built in 1215 by the Bishop of Roskilde. It looked more like a palace than a castle. It was fortified during the Middle Ages and this was done so well, that the castle was extremely strong. In fact, it was the only castle still standing after the so-called Count’s Feud (1534 – 1536). During this war, the Protestant Count Christopher of Oldenburg supported the Catholic Christian II to become King. They sieged Dragsholm Castle and in 1536 it became the official castle of the Danish Crown.

It was attacked by the Swedish as well. They tried to blow the castle up and succeeded quite well at that. The King was in massive dept after the war and was forced to sell the castle to a noble. This noble restored the castle and gave it a Baroque style. The nobleman’s family died out in 1932 and the castle was turned over to the Central Land Board. They sold the castle to a private owner named J.F. Bottger, who turned it into a luxurious hotel.

From 1536 to 1664, Dragsholm Castle was used as a prison for noble and ecclesiastical prisoners. Even the last Bishop of Roskilde, whose predecessors owned the castle, was imprisoned, simply because he was against Christian II. He was kept in the large tower at the northeast corner of the castle. The prisons were equipped with toilets and windows depending on which crime you had committed and the seriousness of the insults towards the King. Other famous prisoners at Dragsholm were Joachim Ronnow, James Hepburn, and Ejler Brockenhuus, who used to be the confident of the King.

The ghosts of Dragsholm Castle

There are over 100 ghosts haunting Dragsholm Castle, but a few of them stand out. Psychics and mediums have tried to communicate with these ghosts, and some interesting information came out of that.

The ghost of the Bishop

The last Bishop of Roskilde haunts the castle tower. This is where he was imprisoned. Today, those cells are turned into modern hotel rooms. Guests who have stayed here, have reported moaning and wailing sounds from the hallways on the second floor.

Ejler Brockenhuus was once the Kings confident, but somehow, he blew it with the King and ended up in prison. He is nicknamed the Mad Squire because he lost his sanity towards the end of his imprisonment. He was only able to blurt out bitter and abusive dialogues which people were unable to follow. You can still hear him rambling in the corridors near where his cell used to be.

The ghost of the Earl of Bothwell

James Hepburn, the 4th Earl of Bothwell also haunts the castle. He was engaged with a Danish-Norwegian woman named Anne Rustung when he took off to Scotland to marry Mary, Queen of Scots. He took Anne’s sizable dowry with him. This was a mistake. Because when James was accused of murdering the second husband of the Scottish Queen, Lord Darnley, he decided to flee to Denmark.

The powerful and humiliated father of Anne Rustung tracked the Earl down and made sure he got his punishment. His days in prison were horrible. He was chained to the wall and was left to die. He was only 44 years old when he passed away in his cell. His ghost is frequently seen at the castle and he’s also seen entering the castle in a ghostly horse-drawn carriage. His mummified body is kept in the nearby Faarevejle Curch as pictured above.

The Lady in White

This is a sad story. A Lady in White haunts the castle as well. She has been seen by many and each time she appears to be looking for someone. Great sadness overcomes those who have seen her, and that’s not surprising when you hear her story. She is believed to be the ghost of Celina Bolves, daughter of the powerful and noble Bolves Family. Celina fell in love with a commoner who worked at the castle.

Celina’s father disapproved of the relationship and forbade his daughter to see him again. But Celina loved this man so much and at some point, she even got pregnant. When her father found out he was furious and had his own daughter imprisoned. She was chained to the wall, like James Hepburn, but what happened to her was even worse. A wall was built around her and she was left to die. In the 1930’s, workers discovered her remains inside the wall in the castle’s basement. She was found wearing her white dress.

There’s a happy ghost living at the Dragsholm Castle as well. The Grey Lady used to be a maid working at the castle. One day she had a terrible toothache and the master of the castle felt sorry for her. He gave her a poultice which relieved her pain. She died a while later, but still likes to show her gratitude. Her ghost is extremely helpful, does good deeds and is very protective of the castle. She’s often seen at night, guarding the castle in a very happy manner.

The beautiful Dragsholm Castle is a luxurious hotel today with beautiful gardens and a golf course. It’s located right in the middle of meadows and lakes which gives it a magical touch. There’s even a Michelin starred restaurant in it! Would you dare to book a room here?