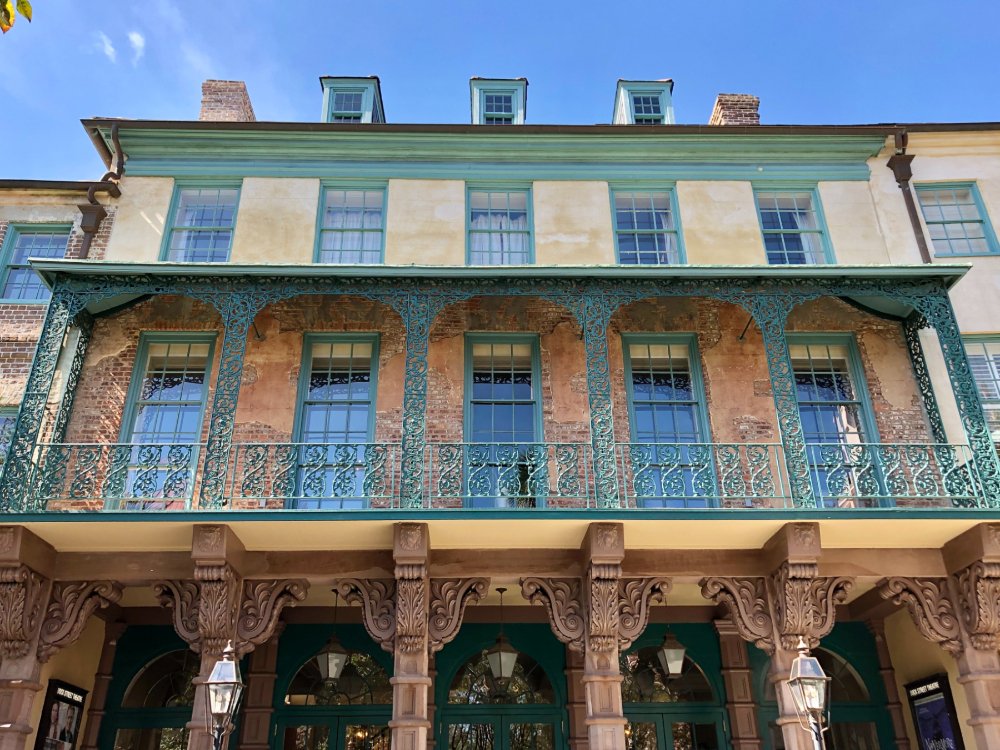 In the historic French Quarter of downtown Charleston, South Carolina, you will find the beautiful Dock Street Theatre. The theatre used to be a hotel and it seems that most of the ghosts that haunt the theatre are from this time. They also seen to enjoy a good show, because they stuck around. Would that stop you from buying a ticket?

The history of Dock Street Theatre

The original Dock Street Theatre had its grand opening in 1736 and was the first theatre in America. Unfortunately, the Great Fire of 1740 destroyed most of the historic buildings in Charleston, and Dock Street Theatre was no exception. In 1809, Planter’s Hotel was constructed on this site by Mr. and Mrs. Alexander Calder. It was named after the Planter Family who stayed over at the hotel each year during horse racing season. After the American Civil War (1861 – 1865), the hotel fell into disrepair.

The 1886 earthquake caused major damage to the building and it was left abandoned for almost 50 years. During the Great Depression, the building became a “Works Progress Administration Project”, creating jobs for the Charleston people. During that time, the former hotel formed the basis for the new theatre. To honor the original, historic Dock Street Theatre, it was given the same name.

Notable workers of the Planter’s Hotel

Several notable people used to work at the former Planter’s Hotel. Naval Cvil War hero and US Congressman Robert Small, started his working career as a waiter at the hotel and the English stage actor Junius Brutus Booth used to perform at the hotel with this theatre group. Junius Booth was the father of the actors Edwin and John Wilkes Booth, yep THE John Wilkes Booth. He was a strong Confederate sympathizer and the assassin of President Abraham Lincoln. Abraham Lincoln was shot in the back of his head and died of his injuries the next day. His ghost still haunts The White House. Father Junius Booth was a hot head himself. He became enraged for some reason and attacked the hotel’s manager, almost killing the man.

The grand opening of the theatre

The new Dock Street Theatre was opened November 26, 1937. It has been successful ever since. In 2010, the theatre had a major renovation. People who work at the theatre claim the ghostly phenomena have increased ever since. Many visitors also claim to have seen, felt or smelled something.

The ghosts of Dock Street Theatre

Dock Street Theatre is the most haunted location in Charleston. It’s haunted by at least three ghosts. The first ghost is most probably the ghost of Junius Booth, the second is a lady in white and the third ghost is that of a prostitute named Nettie.

Junius Booth did not die at the former Planter’s Hotel. Heck, he wasn’t even in Charleston when he died! Even so, people are convinced that it’s Junius’ ghost that haunts the theatre. He loved to perform on the hotel’s stage so much he couldn’t let it go. Junius has been seen on stage but he also liked breathing down people’s necks and even touching them.

Not much is known about the myterious White Lady that sometimes manifests herself to people. Was she an actress? Did she work at the hotel? Nobody knows. But, there’s another lady spirit that haunts the theatre whose identity is very well-known.

Nettie was a 25-year-old country girl looking for love and excitement in the big city. Charleston was looked upon as a high-class neighbourhood, so Netty thought she had the oppertunity for a better life here. Nettie was a beautiful young woman but considered too old for marriage. Most wealthy men chose their brides who were in their teens. Back then, it was also very uncommon to marry beneath ones class, so Nettie didn’t stand a chance in finding love. She realised she needed a job and ended up working as a clerk at the local St. Philip’s Episcopal church. She did a great job and the priest was very content with her, but somehow Nettie didn’t feel she belonged.

Nettie decided she needed a new challenge. If she couldn’t get genuine love, then she’d seek it in other ways. She withdrew all her money and bought the most expensive red dress she could find in a upscale store in Charleston. She entered the Planter’s Hotel in her new dress and started seducing men. The hotel turned a blind eye when it came to prostitutes and Nettie was very successful. She did continue to go to church each Sunday, but her new profession didn’t stay unnoted for long.

The death of Nettie

The wives of her customers gave her ugly looks while she was in church, so she decided to confront them. Her clients, however, didn’t want to lose their wives, so Nettie started losing customers. It didn’t take long before she was penniless. Nettie snapped at the hotel after another customer rejected her and she went out on the second-floor balcony of the hotel. Outside, there was this terrible thunderstorm. She shouted disparaging remarks to Charleston’s society. The priest, het former boss, tried to reason with her. He still had a soft spot for Nettie. She shouted: “you cannot save me!” at the priest and was struck by lightning. She was killed instantly.

The ghost in the red dress

Nettie still haunts the theatre in her red dress. The strike of thunder made her lose her beauty in afterlife. Her zombie-like appearance scares many visitors, though most people just catch her glimpse. Some theatre employees say they see her every day and they have gotten used to her looks. Most of them empathize with the poor woman for not finding in life what she wanted.

Due to the coronavirus the theatre won’t be opening its doors before 2021. But they have some great shows in stock, so be sure to get your tickets! In the meantime, the stage belongs to the spirits. I’m sure they’ll put up a great show.