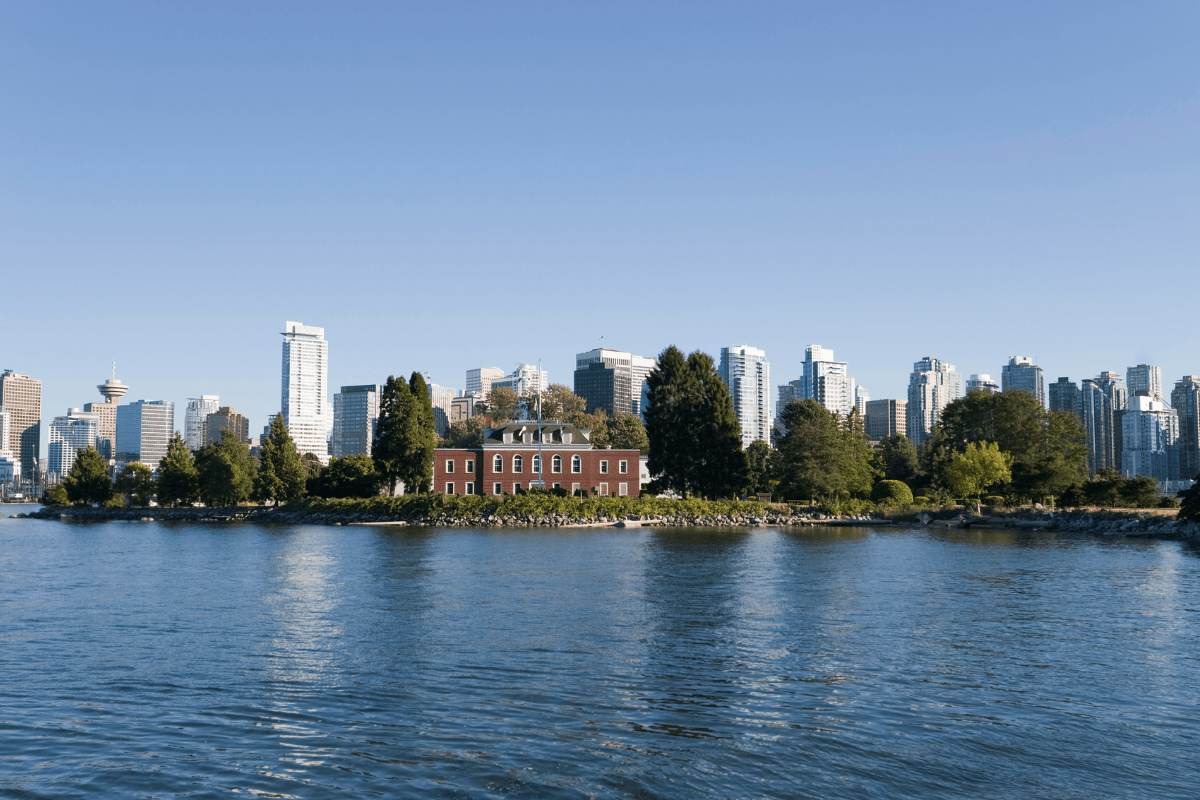 I love islands and their stories, especially when they have sinister names. And I was lucky! I found two islands named Deadman’s Island and they are both creepy! This one is located in Coal Harbor, Vancouver near Stanley Park and the other one is located in Kent, England. I wrote about the English island in this story. Be sure to check that out as well. As for the Vancouver island: let’s dive into history!

The history of Deadmans Island Vancouver

Deadman’s Island (or Deadman Island) is a 3.8 ha island which is connected to Stanley Park via a short timber-structure bridge. At low tide it’s accessible as well, although it’s not open to the public. One of Vancouver’s first settlers, John Morton, set foot on the island in 1862. He was very charmed by it. It didn’t take him long before he discovered hundreds of red cedar boxes lashed to the upper boughs of the trees. Of course, Morton wanted to see what was in them and when he poked into one of the boxes it fell apart. In them he found the skeletal remains of a dark haired person!

Morton met Squamish leader Chief Capilano later. He told him that the Squamish people, a native Indian tribe, used this island which they called “Skwtsa7s” (translated “Island”) to bury their poeple in trees. He also told Morton the island had been the site of a brutal massacre. A long time ago, northern and southern nations fought over who could claim the island. The southern nation had kidnapped 200 women, children and elders at some point and the northern decided to trade 200 young warriors for these hostages.

The 200 young warriors were brutally slaughtered by the southern nation. They didn’t stand a chance. The next morning, after the dead had been taken rid off, the southern nation returned to the spot where the warriors had died. They were shocked to see hundreds of flaming fire-flowers right where their bodies had fallen. The southern nation immediately left the island in pure terror. After hearing this story, Morton too decided to leave the island. He believed it was cursed. By 1870, the tree coffins were taken down and the remains were buried in Stanley Park.

The island didn’t have a real purpose after Morton left and the settlers started using the island as a burial site for their people. Twenty-one victims of the Great Vancouver Fire of 1886, Canadian Pacific Railway workers who died during construction and residents of Moodyville, Hastings Sawmill and the Granville townsite were all buried here. This was done until Mountain View Cemetery, the only cemetery in the city of Vancouver, was built in 1887. But even after 1887, bodies were buried here. And that had to do with the outbreak of a smallpox epidemic in 1888. From 1888 to 1892, Deadman’s Island became a quarantine site for people suffering from the highly contagious smallpox disease. Few people survived the horrible illness, and those who died from it never left the island.

Deadman’s Island became the site of a long conflict between 1899 and 1930. Theodore Ludgate leased the island from the federal government in 1899 and wanted to place his lumber mill on the island. Mayor James Garden and some other officials assumed the island was included with the original Stanley Park land. Ludgate didn’t want to waste time waiting for the official clear and he and some of his men set off to the island to clear the old Squamish houses and trees. The mayor was one step ahead of him, though: he was already waiting on the island with the police. He was arrested, but succeeded in taking down trees and houses later. In 1911, he finally won his case, but Ludgate was unable to meet the terms of his lease and he lost the island to the government in 1930 anyway.

The island was abandoned again after this until 1943. Then it became the home of the HMCS Discovery (Her Majesty’s Canadian Ship). The Vancouver’s Naval Reserve Division was housed in the stone frigate which is strategically located on the island. Today, this is still the case. Unfortunately, the island is closed for the public. That is why it has never been investigated by paranormal groups. But it is haunted alright!

The ghosts of Deadmans Island

Most of the paranormal phenomena are experienced by reservists. Normally, the island is unoccupied at night, but on some occasions, naval personnel spent a night or two there. And everyone who stayed over, experienced strange things. Building No. 1 seems to be the most active paranormal spot. Those who spent the night there, claim to have heard footsteps in the rooms above them. They even heard furniture moved. When they went up to check, no one was there. They thought it was someone of security but later they discovered they were on the island all by themselves! Some reservists have seen full apparition bodies, some heard disembodied voices and others have witnessed a strange glow through the trees which formed into a human shape. Given the history, I’m not surprised it’s haunted.

The city’s lease of Deadman’s Island from the federal government expired in 2007 but was renewed again in 2008. Vancouver’s former mayor Sam Sullivan wanted it to become the home of a ferry shuttle, a maritime museum and a building to celebrate the island’s aboriginal heritage. So, who knows what will happen in the future! But, whatever happens, it will always be the island of the dead.

Do you want to read more stories about haunted places in Canada? Click here!