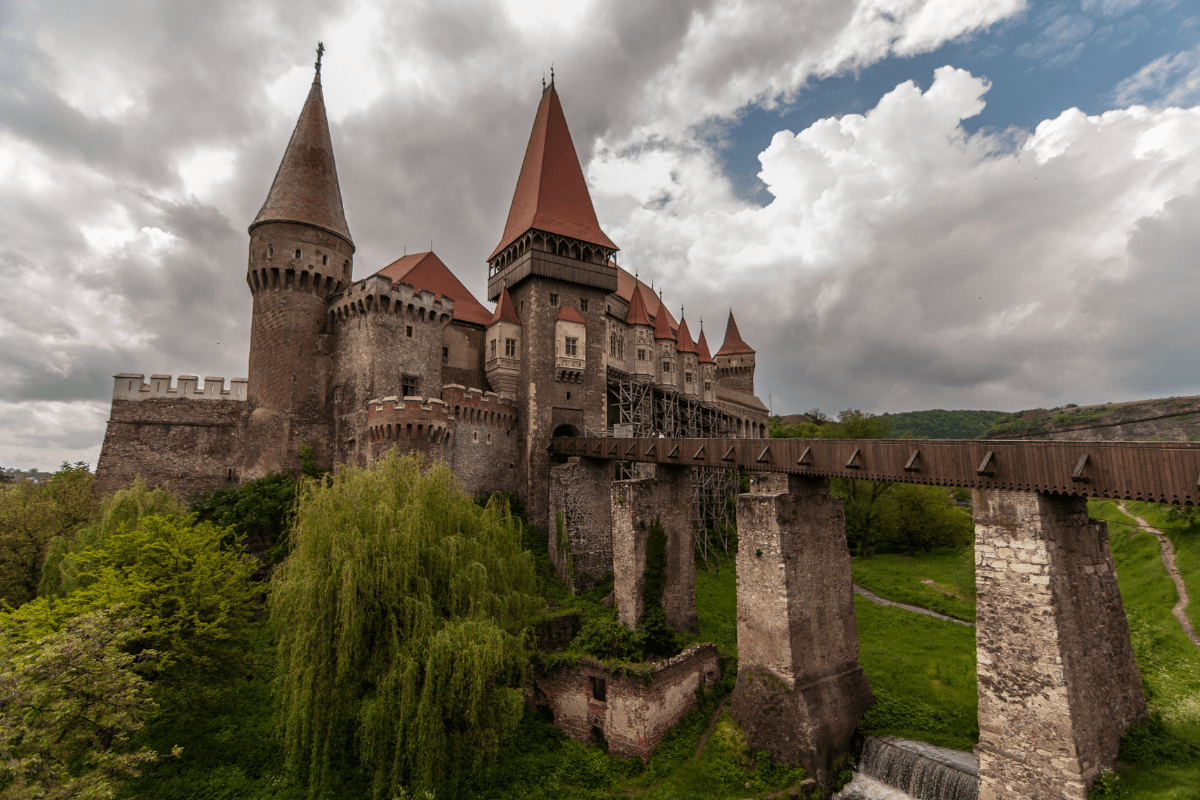 Corvin Castle is one of the biggest and most impressive castles in Europe. It is located in the city of Hunedoara on the Hungarian-Romanian border. The castle is also referred to as Hunyad Castle and Hunedoara Castle. Even though Corvin Castle looks like it’s coming straight from a fairy tale book, its history is quite dark…

The history of Corvin Castle

John Hunyadi, the Voivode (ruler) of Transylvania, ordered the castle to be built in 1441. He chose the location carefully; right on top of the ruin of a fortress once built by King Charles I of Hungary. Today, due to border changes, the castle stands in Romania, but back then it was on Hungarian land. Corvin Castle is built on top of a hill, right above the Zlaşti River. It has several large towers which gives this Renaissance-Gothic castle a romantic touch. Three of these towers (The Capistrano Tower, the Deserted Tower and the Drummer’s Tower) were used as prisons.

It took about 15 years to construct the castle and when John Hunyadi died in 1456, the work on the castle stagnated. It was in the 17th century that people wanted to renovate the castle. In 1854, a fire caused by lightning destroyed all the wooden parts of the castle, except for one thing: the 500-year-old wooden door to the dungeons. It took over 40 years to restore the castle again.

You have no soul

In the courtyard, near the 15th century chapel, a 100 ft (30 m) deep well can be found. According to the legend, this well was dug by 3 Turkish prisoners who were promised freedom if they reached water. They had to dig into solid stone, so it took them 15 years and 28 days to finish. When the water came into sight, the three exhausted men were thrilled.

But, John Hunyadi, who made them the promise, had died in the meantime and his wife had other plans. So, the keepers just laughed and threw them back into their cells. One of the prisoners wrote “you have water, but no soul” on the wall near it. And by this, he cursed it. Today, Turkish tourists still throw coins into the well to honor their enslaved countrymen.

Vlad III of Draculesh, the Impaler

Some claim the ruthless Vlad The Impaler has been held prisoner here for 7 years from 1462. Some people claimed he was imprisoned by John Hunyadi himself, which is quite amazing for the good man himself who had passed away 6 years earlier. The tour guides can even show you where he was held, but there’s no evidence of that at all. It’s a good story, though. He allegedly kept himself alive eating rats.

They claim he lost his mind after a while and got obsessed by impaling his victims because he did the same to the rats he ate. Fact remains that many have suffered through torture in this castle. A torture chamber can be found in the dungeon and apart from some very interesting torture devices, it houses a bear pit as well. Prisoners who were sentenced to death were thrown in this pit and eaten alive by the hungry bears below.

The legend of the Raven

John Hunyadi’s family crest contains a raven (corvus is raven in Latin) carrying a golden ring in its beak. There’s a legend about this, which may have some truth in it. King Sigismund of Luxembourg ruled Hungary from 1387 until 1437. He had a child with one of his subjects. He gave her a golden ring, telling her to pass it on to her son. The ring was given to the son when he was of age, but a raven stole it and took off. John Hunyadi got it back while shooting the raven with an arrow. Which might indicate that John Hunyadi is the illegitimate child of King Sigismund. But we will never know the real story behind this.

The ghosts of Corvin Castle

A place with so much pain and suffering must be haunted. And it is. The Capistrano Tower is haunted by a monk. The monk was sentenced to death for spying on a nobleman in the council room. He was bricked in the wall and slowly died. He’s still there, spying on people. So, when you’re in there and you’re feeling watched, it’s probably him. I guess he never learned anything from his punishment.

There have been other reports of people seeing apparitions, shadow figures and orbs. Many EVP’s (Electronic Voice Phenomena) have been recorded as well. And there is some violent poltergeist activity going on. People also get overwhelmed by the feeling of dread, screams and footsteps are heard and people have been touched by unseen hands.

Locked inside the castle

A few years back, some clever tourists managed to get themselves locked in at Corvin Castle after hours. What started off as a prank resulted in utter fear. When the castle opened its doors the next morning, they were found bruised, beaten and literally terrified. They said some unseen force tortured them all night. So, whatever you do, don’t get locked in. Not even for fun.

The castle has been a museum since 1978 and offers tours. But beware of the torturous poltergeist, he’s out for your blood.