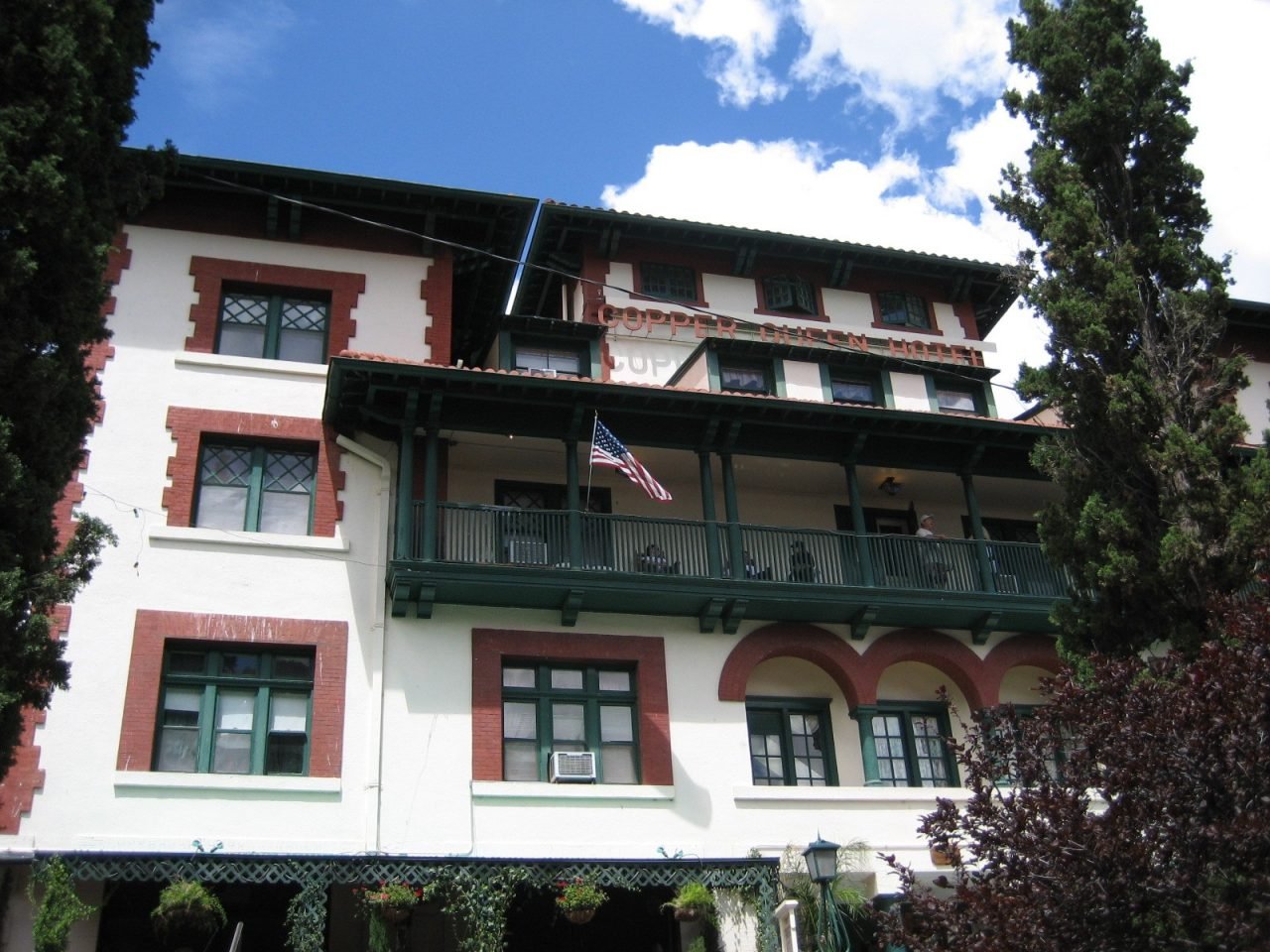 The Copper Queen Hotel can be found in the former mining town Bisbee in Arizona. Bisbee was once a thriving copper town. The Copper Queen Hotel is the longest continuously operating hotel in this state. Not two rooms are alike in this historic building where many celebrities once slept. But they might have not been alone in this hotel, because some guests have never left. And they are not shy to make contact.

The history of the Copper Queen Hotel

When copper was discovered in Bisbee, the Phelps Dodge Corporation thought investors and dignitaries needed lodging while visiting the nearby mine. So, the Copper Queen was constructed in 1898. The hotel was ready by 1902 and housed 72 rooms with a shared bathroom on each floor. The Phelps Dodge Corporation had a mercantile building across the street from the hotel and the large boiler in that building provided heath for the hotel through a tunnel.

To keep the hotel cool, the walls were very thick and the Palm Room on the first floor was used as an air well during Summer. Sadly, the stained Tiffany glass in that same room was destroyed by a monsoon. The hotel also houses a restaurant, now named the “1902 The Spirit Room” and a Saloon which is now named the “Overlook Saloon”. Famous people who stayed at the hotel were John Wayne, Harry Houdini, Nancy Reagan, Michelle Pfeiffer, Julia Roberts and Keifer Sutherland.

Copper, gold and silver were found in Bisbee. The discovery made the town “the place to be” at the start of the 18th century. The copper mines were closed in 1975, but the town remained popular among tourists because of the historic old west charm. Most buildings are built in the Victorian style and the Copper Queen Hotel is no exception. The hotel has been modernized a couple of times, but the Victorian elements are still there. It now has 48 rooms, all with their own bathrooms. There are 5 more rooms in the courtyard, adjacent to the hotel. All rooms have their own personalities and two of them have even been named after their ghostly residents.

The ghosts of the Copper Queen Hotel

There are at least three ghosts at the Copper Queen Hotel. They are all friendly, even though one of them loves a good practical joke. TV shows like Ghost Hunters and Ghost Adventures visited this hotel and received some convincing evidence!

One of the ghosts at the Copper Queen Hotel is that of an older gentleman with long white hair and a beard. Right before he manifests, people claim to have smelled the scent of cigars. He always wears a top hat and a black cape. His favorite hangout is the fourth floor and he sometimes appears in rooms as a shadow figure.

Another ghostly resident of the hotel is a young boy named Billy. He tragically drowned in the San Pedro River. He most likely haunts the hotel because his mother used to work here. He’s a little practical joker. He likes moving objects, makes things levitate and he changes the tv channels. Billy loves playing with your items that look like toys. His little footsteps are heard running down the hallways and he likes to giggle. No one has ever seen the boy, but he’s present alright. Billy has room 412 named after him. Even though the boy seems happy he’s still terrified by water. Whenever the sink faucet or shower is turned on, people hear him crying. Poor boy.

Julia Lowell’s ghost is probably the most famous at the hotel. Julia used the hotel for herself and her clients for she was a prostitute. She fell in love with one of her customers and when she told him about her feelings, he rejected her. Julia was heartbroken and took her own life by hanging herself in room 315. This room is named after her. Julia’s spirit still haunts the Copper Queen Hotel. She manifests herself to men only, staff or guest. She likes to play with men’s feet, whispers in ears and has even been seen dancing provocatively at the stairs. Once a female guest spotted her when she turned the corner. Julia was caught by surprise and spoke the words; “Oh, oh! Have you seen anything?” I guess ghosts can get startled as well!

The Copper Queen Hotel still is the only full operating hotel in Bisbee so if you’d like to visit a real old west town, book a room here. If you’re not scared of ghosts, make sure to book room 315 or 412. Make sure you’ll write all your ghostly adventures down in the special Ghost Log at the reception. You’re in for a treat!