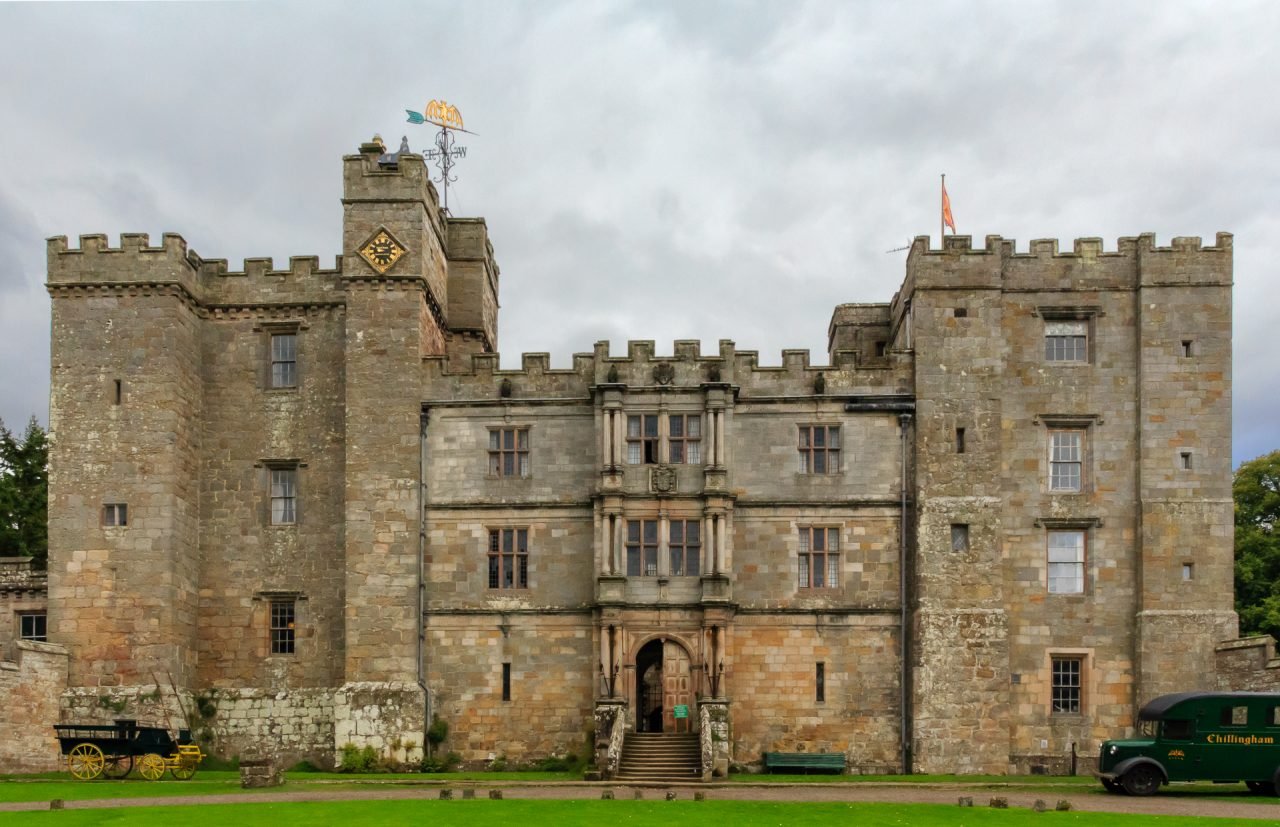 Chillingham Castle is said to be the most haunted castle in England. More than 100 ghosts are said to haunt it. It was built as a monastery before 1246, later transformed into a castle. You’ll find the castle in Northumberland, near the Scottish border. King Edward I used the castle as an accomodation in 1298 while heading for his fight with William “Braveheart” Wallace. It’s a place of war, torture and death.

The history of Chillingham Castle

In the beginning, the castle was used as a monastery and it was the home of the Grey family from 1246. The original manor house was destroyed by a Scottish raid in 1296. By 1298, the new manor house was built, though more fortified. The foundations of the castle as we know it today were created then. This is also when King Edward I visited Chillingham Castle on his way north to fight William “Braveheart” Wallace at The Battle of Falkirk. Wallace was defeated at that battle. He managed to escape, but for many other Scottish people, the terror had just begun.

The Grey and the Bennet families

Alongside the Grey family, Chillingham Castle was also owned by the Bennet family. No less than 18 family members belonged to the Most Noble Order of the Garter. The main purpose of this order was to connect the most powerful nobles to the King. Even though the family was noble, it was also quite rebellious. Eight family members were executed. They were hanged, drawn and quartered and their heads impaled on the city gate as a warning. Some members were lucky and only lost their heads. When the Scottish-English war (1296 – 1346) was over, the castle lost its defending task. A beautiful forest was created around it where up until today the special “Chillingham Wild” cattle is kept.

Chillingham Castle has a very bloody history. Many Scottish people have met their end here. Most of them by the hands of a man named John Sage. He was nicknamed “John Dragfoot” or worse “The Butcher of the Scots”. John Sage was a cold-blooded and ruthless torturer and executioner who had the time of his life in his torture chamber. He hated the Scottish and he was a frustrated man. As a lieutenant, he got badly injured on the leg. As a result, he wasn’t able to fight anymore. He tortured more than 50 people each week for the period of three years. He probably tortured and killed over a thousand people at the castle.

The Torture Chamber which is open to the public contains all of Sage’s toys. However, you need to bare in mind that this is not the original torture chamber. The real torture chambers are located underneath the Tea Room (the Castle’s restaurant). They were sealed off for the public after a seance was performed there. The seance had a pretty terrifying ending, so to keep the danger inside it was closed up. Many human remains are still down there.

Sage’s torture devices were “the Wheel”, “the Iron Maiden”, “the Iron Chair” and of course “the Rack”. This device was used to stretch someone until the joints popped. Some people claim they hear the sound of popping joints when they stand next to the device. But he also liked to impale, boil and starve his victims to death. He even invented a torture device: a barrel filled with iron nails inside. The victim would be placed inside and rolled all the way down to the other side if the Torture Chambers. The victim was skinned alive that way. Oh, and yes, the floor of the chamber was sloping to allow the blood to drain more easily.

At the end of the Scottish-English War, the English needed to get rid of the remaining prisoners. They made a huge fire at the Courtyard and burned all the men, women and older children alive before the eyes of the younger children. After this, the children were taken back into Chillingham Castle where they were hacked to their death in the King Edward’s Room. John Sage was later publicly hanged. Because he was deeply hated, the public cut off his fingers, toes, nose, lips and genitals while he was still struggling for breath. Disembodied voices and full-bodied apparitions have been seen wandering the courtyard. Even the ghost of John Sage is said to haunt the Courtyard.

The Pink Room is a private room today and is the residence of the current owners. But, this room is very haunted. The skeletal remains of a young boy were discovered here during renovation work. The boy’s fingers and fingernails were broken which indicates he was bricked in the wall alive. His spirit is now known as the “Blue Boy”. He appears from the wall. Before he visits, a blue halo appears. The Blue Boy is very friendly and he is a much loved ghostly resident of Chillingham Castle.

The Room of King Edward

The King Edward’s Room is the room in which many young children were hacked to their deaths after the Scottish-English War was over. They killed the children because they were afraid they would retaliate later. A dark, malevolent spirit resides in this room. The spirit is very violent and aggressive and has attacked several people.

The ghost of Lady Mary Berkely

Lady Mary Berkely is still looking for her adulterous husband; he took off with her sister. The rustling sound of a long skirt is heard before she appears. Footsteps and whispers are heard, cold spots are felt and sometimes people get pushed down the stairs.

The Chapel is a highly active room. Three human skeletons were found here. Two of them were found under the glass stained window and one was found in the back corner underneath the floorboards. The latter skeleton belonged to a little girl. No one can tell who she was or what happened to her, but her spirit likes to interact with people. She likes to communicate (to female visitors, sorry gentlemen) and she’s known for playing with a person’s hair. People feel with overcome with sadness when they sit on top of the place where she was found.

The Still Room and the Dungeon

One of the rooms where you can spend the night is the Still Room. It is connected to the Dungeon, and thus a very interesting place. The Still Room was used to keep the castle’s treasures. Each night, a guard was locked in here to guard them. One night, a guard who was locked in, was alarmed by an old, frail looking woman who was inside the Still Room with him. She asked him for water. When the guard went to get it, he was confused: he was supposed to be there all by himself! When he returned with the water, the old woman was gone. She is now known as the Pantry Ghost. She was most likely poisoned inside the Still Room and still haunts it, asking for water.

A Spanish witch was also killed in the room. Right before she died, she cursed the castle. Anyone who would take anything from the castle would experience bad luck. The room contains numerous taken objects that have been sent back by visitors. The Dungeon is a very tight space. There’s two cells in it. It’s pitch black in there and really cold. One of the cells contains a murder pit. Injured prisoners were thrown inside and left to die. A door from the gardens gives access to the pit. The castle’s dogs would have indulced the flesh of the dead. If you take a close look, you’ll still see human remains inside the pit.

The garden and the lake

The garden of Chillingham Castle is a beautiful and peaceful place, but looks can be deceiving. Through the archway, there used to be three “hanging trees”. Two of these massive trees have fallen, but they are still in the garden. When someone was hanged at Chillingham Castle, the corpse would remain up in the tree until the decayed bodies would fall off. The bones were just left there. Sometimes, human remains are found in the ground. They surface when it gets really cold. The hanged weren’t given a proper Christian burial because that disabled the soul to move on.

The lake in the garden looks very peaceful, but underneath the surface are the bones of hundreds of murdered Scotsmen. Their tormented souls will pull you under water and drown you if you stick your hands in it. And then there is the so-called Devil’s Walk. It’s actually the main entry driveway now, but it was used for hangings as well. Here, human remains are still found as well. When you walk the Devil’s Walk at night, there is a chance you’ll hear footsteps right behind you. The gardens are also haunted by monks. The monks from the nearby monastery took pity on the people who were hanged (from their feet, so death would occur later) so they took them down. Soldiers who caught them doing so hanged them as well.

Other ghostly phenomena at Chillingham Castle

There are cold spots throughout the entire castle and batteries tend to drain, even if they were completely charged. People have seen apparitions, heard disembodied footsteps and voices and have even been touched.

During the Second World War the castle was used as a barrack. The beautiful forest was then burned down. After the war the castle deteriorated. All the lead was taken out of the roof so it started to leak heavily everywhere. In 1982, the castle was bought by Sir. Humphrey Wakefield. His wife is a descendant of the Grey’s. They renovated the castle completely and created holiday apartments in it. You can stay here, but do you have the guts?