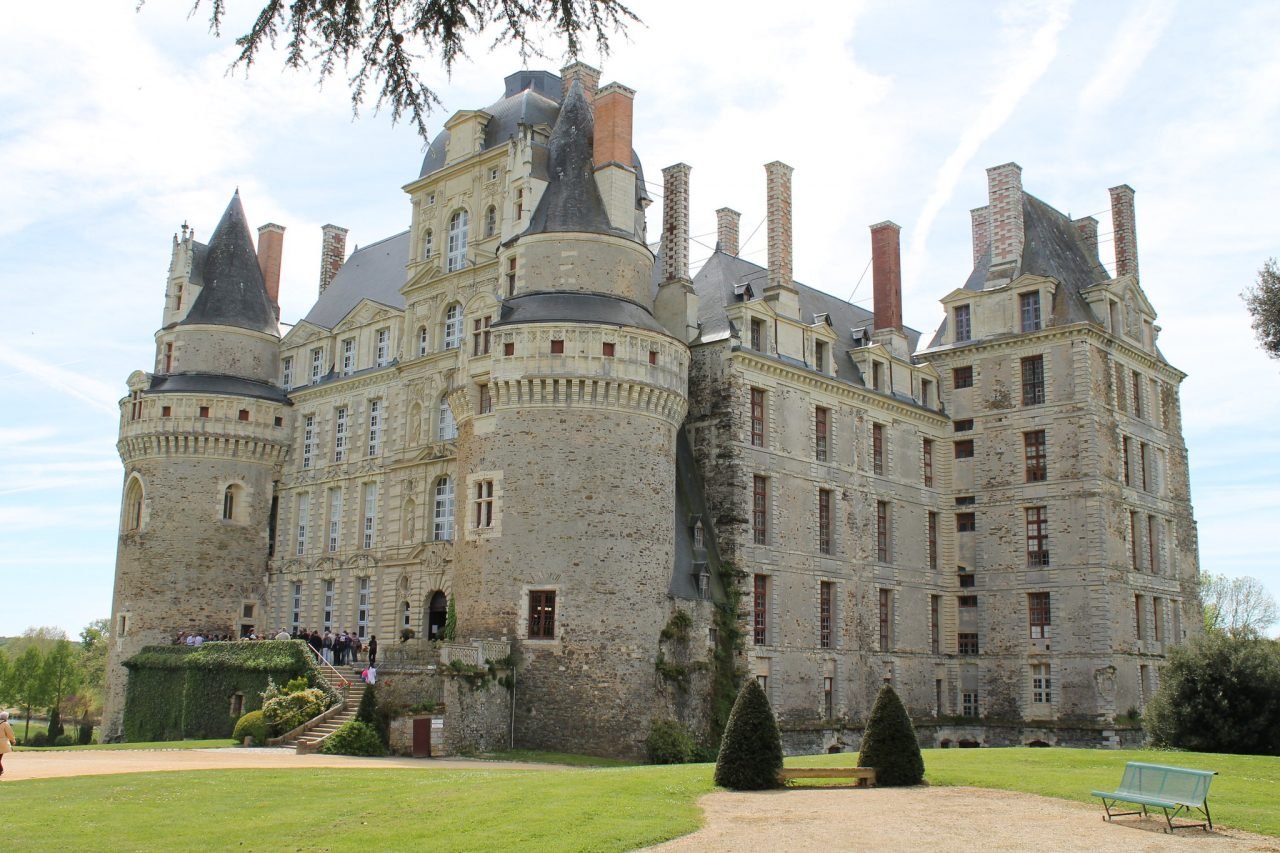 In the Val de Loire, only 9 miles (15 km) from Angers, you’ll find the highest castle in France: Château de Brissac. This family castle is owned by the Cossé-Brissac family since 1502, but it’s a lot older than that. And even though the family has gotten used to the appearance of the resident ghost, she can be quite terrifying to others…

The history of Chateau de Brissac

The original castle was built in the 11th century by Fulco III of Anjou. The castle was rebuilt in 1455 by Pierre de Brézé, a wealthy minister who served King Charles VII and later his successor King Louis XI. Brézé was sent to help Marguerite d’Anjou, the Queen of England, along with Louis. This happened during the War of the Two Roses. Unfortunately, Brézé was killed in battle protecting the King in the Battle of Montlhéry in 1465. His son, Jacques, inherited the castle and he lived in it with his wife Charlotte.

During the Wars of Religion (Guerres de Religion 1562 – 1598) the castle was attacked by King Henry IV of France. It left most of the castle in ruin, but it was rebuilt in 1611 in a Baroque style. With its 7 floors, Château de Brissac, is the highest castle in France and it has 200 rooms. During the French Revolution (1789 – 1799), the castle was briefly out of the hands of the Cossé-Brissac family. It was plundered by revolutionaries and the castle remained that way until 1844, when it was restored and returned to the family.

The ghost of Chateau de Brissac

You may think the place is crowded with ghosts because of its age, but it’s not. In fact, only one ghost roams the castle. There used to be two ghosts that haunted the castle. But at some point, one of them felt the need to move on.

Charlotte de Brézé was the beautiful but illegitimate daughter of King Charles VII and Agnes Sorel, his mistress. Jacques de Brézé married her, but it wasn’t a marriage based on love. Charlotte found love in the arms of her huntsman and they started an affair. One night, one of the servants, awoke Jacques and told him what was going on. He caught the couple red-handed. In a rage of anger, he killed both his wife and her lover in the tower room above the chapel. Some sources claim he took his sword and slashed them to pieces, others say he stabbed them, and some claim he stabbed the man (Pierre de Lavergne) and strangled her. Either way, he killed them. He is said to have fled the castle shortly after the crime because the two ghosts didn’t leave him alone. They kept on moaning all night and it terrified him.

Somehow, Pierre has left the building. His ghost has not been seen in years. Charlotte, however, simply loves to terrify people. Because she wears a green dress, she is called the Green Lady (La Dame Verte). The residents have gotten used to her, even though she’s scary as hell. Especially her face is, for she’s got holes where her eyes and nose should be. She often moans in the wee hours of the morning and she likes hanging out in the Tower Room, where she was murdered.

Today, Château de Brissac is still a family home, housing Marquis Charles-André, his wife Larissa de Brissac and their four children. The castle is open to the public on some occasions, and two rooms are available as a bed-and-breakfast. Curious but cautious? You can have a virtual tour in the castle which I personally find fantastic (don’t forgot to look up, the ceilings are incredible!).

In the English town Warwick in the county Warwickshire, you can find the imposing Warwick Castle. The original fortress was built in 914, so you can imagine that there’s a lot of history here. It served as a stronghold, a residence and a prison. The castle is a much-loved and popular tourist attraction. And some […]
When I’m on holiday, I always try to find something about the history of a certain place. Preferably the dark side of history. In Italy, there are several places that meet  my desire. Take the Ossario di Solferino for instance. The bones of 1413 fallen soldiers were stored here. But, what happened to these poor […]
When I was a little girl, I was immensely fascinated by castles. My vivid imagination was going wild if we visited one. That fascination has never left me. On the contrary: it is even stronger today. I love the stories, the history and learning about the lives of the people that once lived in them. […]
Salem, Massachusetts, is a town with two faces. The harbor-city, where 41.000 people live, has a rich history due to a flourishing trade with the Far East. On the other hand, the city has a dark past. This is where the infamous Salem Witch Trials took place in 1692. Today, it’s not the thriving but […]