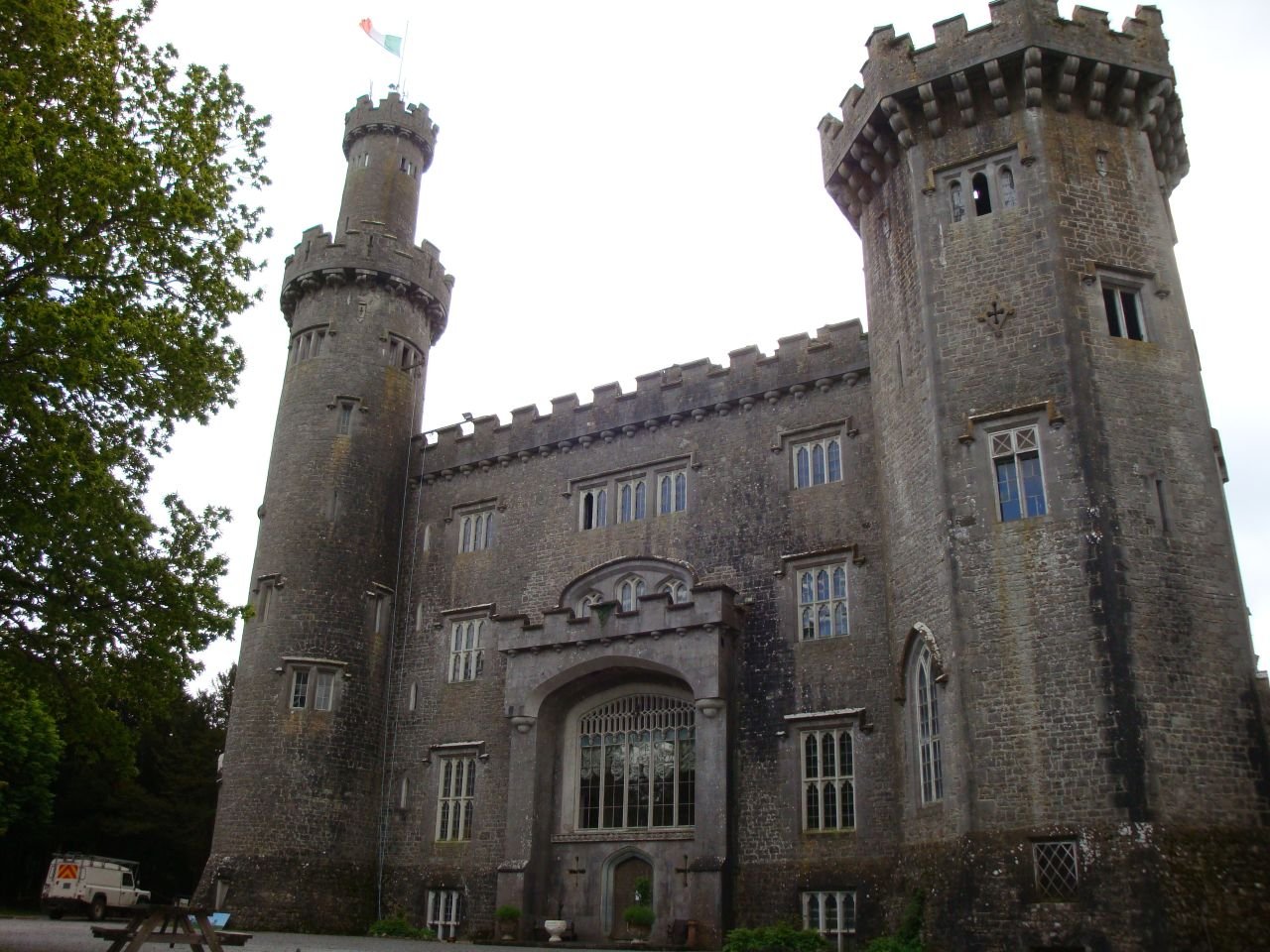 In the Irish village Tullamore, near the River Shannon, you can find Charleville Castle. Charleville Castle is built in the Gothic style and located in the same county (Offaly) as Leap Castle. And like Leap Castle, this castle has its own ghost stories and legends. One of these legends is about the 900-year-old oak, the King Oak, in the garden…

The history of Charleville Castle

Charleville Castle was built in 1798 in a century old oak forest which Queen Elizabeth I once gave to the Moore family in 1577. They were the founders of Tullamore village. The Moore family erected the Earldom of Charleville, but this died out in 1764 because no male heirs were born. The title and the land were inherited by the then 6 month old Charles William Bury, who was the second cousin of the last count.

Tullamore village was nearly destroyed in 1785, when a hot air balloon crashed into the village. This balloon was a birthday gift for Charles’ 21st birthday. The houses in Tullamore had been built very closely together and made of wood. But the accident had a positive side to it: the new homes were much stronger, and the roads were wider.

Even though the Moore family owned the land from 1577, it wasn’t until 1798 that the castle was built. Before that, the land was uninhabited. So why is this castle so haunted? The answer to that might lay in the past. The castle grounds were of great value. From the 6th century, it was canonized by Irish Druids. These Druids used this place for their practices and used the woods for hunting. Also, the location has seen a lot of violence through the centuries. Battles between Ireland and England were fought on this land. And the castle is built on top of a leyline, a line that goes straight through some very important historical buildings and burial grounds. People claim that leylines can strengthen paranormal energy.

Charles designed Charleville Castle together with his wife. The original design was improved and executed by the well-known architect Sir Francis Johnston. The castle was abandoned for a while from 1912, due to the economical crisis and the War of Independence between the IRA and the British government (1919 – 1921). In 1968, the roof was deliberately removed, so a lot of damage was done on the inside of the castle. The authorities agreed the castle should become a ruin. But thankfully, new plans to restore the castle were made in 1971 and people started living here again. But the new residents weren’t alone.

The ghosts of Charleville Castle

A well-known ghost of Charleville is also a very tragic one. It’s the spirit of Harriet, the 8-year-old daughter of the Third Earl of Charleville. She fell over the handrail of the staircase while sliding off in April 1861. Harriet broke her neck and was killed instantly. She haunts the castle ever since. Many visitors feel a cold spot at the staircase, but she also likes to show herself. She loves playing hide and seek with the visitors. She’s often seen in the company of a small boy around her age. It is unclear who that boy was.

The two ghosts locked a daughter of a later resident in a closet in her playroom once. But most of the time, their jokes are innocent and harmless. Sweet even. Owner Bridget Vance once had the fright of her life when she couldn’t find her 3-year-old son in the castle. She feared he had fallen down the stairs, Like Harriet. After a short search, they found him, in perfect health, at the bottom of the staircase. He told his mother a girl and a boy looked after him when he descended the stairs.

Other ghosts and apparitions

Bridget Vance’s mother also had a ghostly experience at the castle. She slept in the tower when she was suddenly awoken at night. When she opened her eyes, she saw an entire procession of ghostly monks and ghosts wearing red cloaks. They gathered around her bed in a circle and they uttered blessings. One of Bridget’s guests, who stayed over in the guest room after a party, claimed he couldn’t sleep because two men were having a loud discussion near his room.

The voices silenced when he turned on the light and opened the door. And surprise, surprise, no one was there. More voices are heard throughout the castle as well as footsteps and children screaming. A white mist tends to appear throughout the castle as well as the ghost of a creepy looking man. One gallery is permanently closed because of the presence of a malevolent spirit. This spirit will do harm to “trespassers”, as he sees the new residents and their guests.

In the castle’s garden stands a huge 900-year-old oak, named the King Oak. This tree had a special bond with the Bury family. If a branch would fall off, a family member was soon to die. In 1963, the tree was struck by lightning so bad, it was nearly split in half. The tree survived, but the head of the family, Coronel Charles Howard-Bury didn’t.

He died a couple of days later without a plausible cause. Today, Charleville Castle is maintained by funds from the 1994 erected “Charleville Castle Heritage Trust”. This will guarantee its survival. You can visit this beautiful castle, even to join in on a “fright night”, if you should dare! Oh and Alton Towers Resort has an Old Oak with a similar legend!