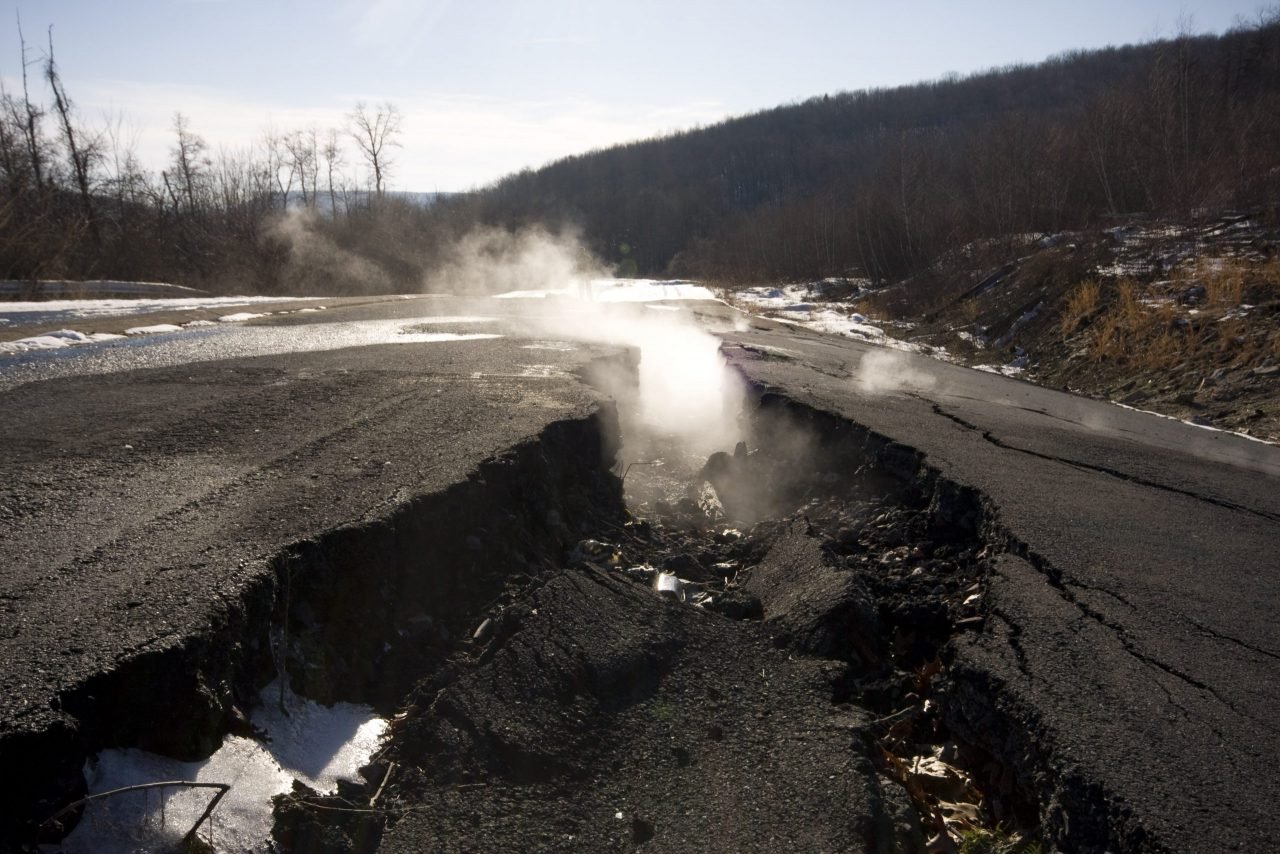 Something strange is going on in the American town called Centralia. It’s a normal Pennsylvanian town at first sight but looks can be deceiving! According to the numbers, Centralia only had 11 residents in 2018. Why? Not because it’s infested with ghosts, nor have aliens landed in the town. But what happened then? Let’s find out!

The history of Centralia

In 1749, this area was sold by the Indians to the first white residents for 500 Pounds. Today, that would be around $ 800.000,-. The new residents immediately constructed a road through it. A large part of this road, the Reading Road (Route 61), is the most important highway of Centralia. In 1842, coal and iron were discovered, and mines were built. The towns success didn’t stay unnoticed. Not only did the town attract miners from all over America, it attracted criminals as well. The Irish activist group Molly Maguire, who targeted Irish American miners, came to Centralia, leaving a trace of destruction behind.

The curse of Centralia

On October 17, 1878, they cold-bloodedly killed the town’s mayor, Alexander Rae, who was in a wheelchair. Three of the killers were publicly hanged, but unfortunately that didn’t stop the group. Killing and plundering they continued their battle. Legend says, Centralia’s first Catholic priest, Father Daniël Ignatus McDermott, cursed the land before being attacked by three members of the Molly Maguire gang. He swore that one day the only building left in Centralia would be the St. Ignatius Roman Catholic Church. He wasn’t that far off. When all the Molly Maguire leaders were hanged, the battle was finally over. But according to the legend, their descendants lived in Centralia for a long time.

The rise and fall of Centralia

Centralia was blooming in 1890! The town housed 2,761 residents, had 7 churches, 5 hotels, 27 saloons, 2 theaters, 1 bank, 1 post office and 14 supermarkets. Things changed when most of the young miners were sent away to fight in World War I. The prosperity collapsed completely when the stock market made a free fall in 1929 because of the crisis. The mines were closed. This created a new job: shaft-mining, also known as “pillar robbing”. The pillars in the empty mines were removed because money was given for them. Of course, as a result, some mines collapsed. This dangerous work was done until 1982 and even to this day people work in the open mines. So, what exactly is wrong with Centralia? Is the town haunted by the ghosts of the Molly Maguire gang? No, on the contrary. No ghost stories today.

In 1962 a huge fire started burning right under the town of Centralia. Fighting the fire was impossible because of the collapsed mines. Even though the fire covered an area of at least 1 mile (1,6 km), people didn’t start to get worried until 1979. John Coddington, Centralia’s mayor as well as the local gas station owner back in those days, put a thermometer into the ground to check on one of his underground fuel tanks. He got a huge scare when the temperature measured 165°F (77,8°C)!

When in 1981 a twelve-year-old fell into a 3.9 ft (1,2 m) wide and 150 ft (46 m) deep sinkhole in his own backyard, all panic broke out. Luckily the boy was saved by his 14-year-old nephew. The steam coming from the sinkhole contained high levels of carbon monoxide. Centralia was a ticking timebomb and many residents moved away. Twenty citizens decided to stay. Apparently, they loved the city more than their own health. The cause of the fire was never discovered, but there are some theories. The most likely theory is that a 1932 fire was never extinguished properly.

The most recent counts say that no more than 11 people live in Centralia now. After 20 years of legal fiddling, they were each given $ 349.500,- compensation and the approval that they can remain there. For that, they had to give up their real estate. They can only use the homes the government owns. In 2002, the area even lost its Zip-code. The roads can no longer be used because of the underground heat. Repairs are no longer done. Scientists claim the fires can continue for another 250 years…