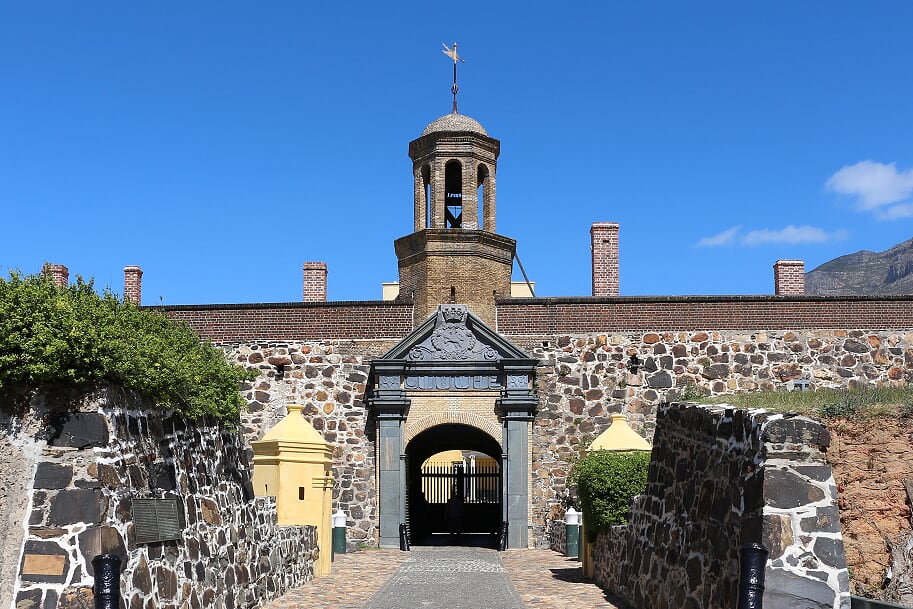 As a Dutch person, visiting Cape Town was like coming home. Many Dutch influences can be found in this beautiful South African city. And, even though Afrikaans is different from Dutch, I understood each word. But still, I’m not particularly proud of our legacy there. The main Dutch mark on Cape Town is that of the Dutch East India Company (in Dutch: The Verenigde Oost Indische Company, VOC). You literally can’t ignore it. Especially not in the very haunted Castle of Good Hope.

The history of the Castle of Good Hope

Built between 1666 and 1679 by slaves, soldiers and sailors, the Castle of Good Hope (Afrikaans: Casteel de Goede Hoop) is the oldest existing building in South Africa. Jan van Riebeeck, a Merchant who lived from 1619 – 1677, constructed the original fortress in 1652. The original fortress consisted of clay and timber and was built to supply the ships passing the treacherous coast around the Cape on the long voyages between The Netherlands and Indonesia, or East India, as it was referred to in the past.

The castle is a pentagonal (bastion) fortress and it was built in fear of the English fleet. Yes, we kind of annoyed the English at sea back then. It took a while before it was finished, because The Dutch East India Company didn’t feel the need to spend money on it at first. But when England declared us war because we took the rights for the best products, the fortress was a necessity. In 1936, the fort was declared a historical monument. It is the best-preserved example of a Dutch East India Company Fortress.

About the Castle itself

The five bastions were named after the titles of Willem III van Oranje-Nassau: Leerdam, Buuren, Katzelnellenbogen, Nassau and Oranje (Orange). A bell tower was also constructed in 1684 and the original bell, which was made in Amsterdam in 1697, still hangs. It weighs over 660 lbs (300 kg). The bell was used to announce the time and as a warning device which could be heard from miles away. The fortress housed a church, a bakery, living quarters, shops, cells and a dungeon.

The Castle of Good Hope was used as a prison during The Second Boer (Farmer) War from 1899 – 1902. Fritz Joubert Duquesne, leader of the Duquesne Spy Ring, was caught and imprisoned here. He nearly escaped by digging his way through the thick cement wall using just an iron spoon. Duquesne nearly got out, but then a large stone slipped and nearly crushed him to death. He was found by his guard the next morning, unconscious, but still alive. The torture chamber was called Donker Gat (the Dark Hole), which is a windowless dungeon. It sometimes flooded in Winter, drowning its contained prisoners.

Ghosts of the Castle of Good Hope

Oh yes, it is haunted. Workers and visitors report hearing voices and footsteps in the windowless dungeon and in the building’s narrow corridors. The bell in the bell tower sometimes rings on its own accord. That should be impossible for it was bricked up centuries ago. Legend says a soldier once hung himself by the bell-rope. Perhaps it’s his ghost that rings the bell.

But that’s not all…

A vicious black dog is also said to haunt the castle grounds. It lunges at people before suddenly disappearing. People also claim to have seen a tall, luminous man leaping off the castle walls. He disappears right before he hits the ground. A man and a woman are frequently heard arguing near the guard’s room. If people check it out, only a shapeless figure is seen. Here, an electrical bell is also heard, while nobody is around to ring it. Even today, soldiers who guard the castle at night, rather avoid passing through the castle’s archways. They say they fear the restless souls that roam these.

Lady Anne Barnard also haunts the castle, up until this day. She lived here in the late 18th century. As the first lady, she was responsible to entertain important guests that visited the castle. She seems to keep on doing this, even though she passed away over two centuries ago. She appears when the castle is visited by important people.

Another ghost that keeps popping up, is that of governor Pieter Gijsbert van Noodt. He was a strict and militant man. Van Noodt sentenced 7 men to death on April 23, 1728. He refused to grant a prisoner’s last wish right before his hanging. The prisoner then cursed Van Noodt. Later that same day, Van Noodt was found dead in his office. He died of a heart attack, even though he was completely fine in the morning. Today, workers and visitors experience his bitter presence and they hear him cursing and swearing inside the castle walls.

The Castle of Good Hope today

Today the castle houses the Castle Military Museum and ceremonial facilities for the traditional Cape Regiments. Unfortunately, I don’t have juicy ghost stories to tell about this place myself.  However, this is great piece of history, don’t you think? And the most exciting thing is, that restoration has uncovered new, secret areas. There might be more rooms that haven’t been discovered yet. What secrets does this castle hold? I have to go back someday!

Can’t get enough about stories of haunted places in Africa? Click here!