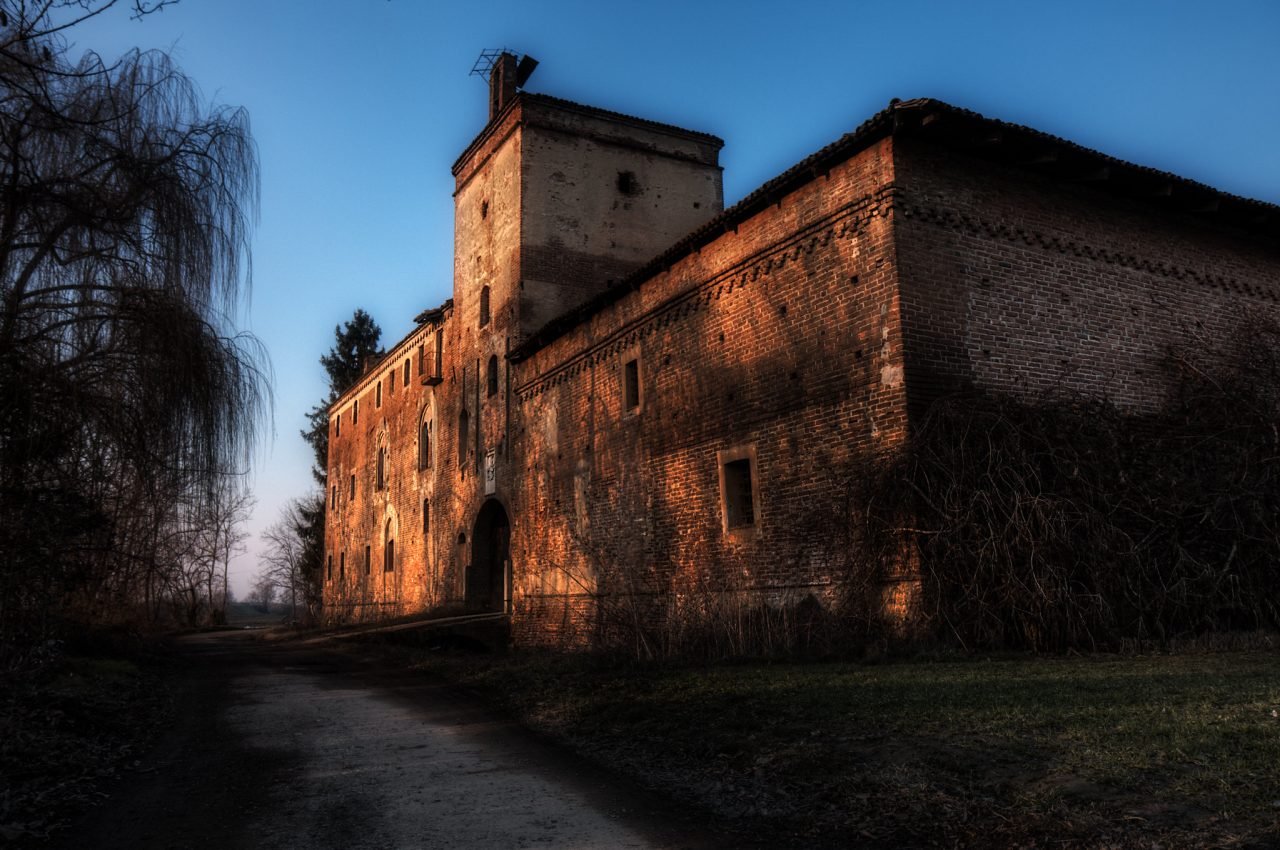 Near the Italian town Moncalieri in Turin, you’ll find a small castle with a lot of history. The name of the castle is Castello Della Rotto (or Maniero Della Rotta). Another name for the castle is “The Castle of Fear” (in Italian: Il Castello Della Paura), and it’s rumored to be the most haunted castle in Italy. But why is this castle so haunted? Let’s find out!

The history of Castello Della Rotta

Castello Della Rotta was constructed in the 11th century, but its original structure might even be older. It was first owned by the Romans who built the fortified castle to protect the bridge over the Banna-stream. The bridge was important to the Romans because the Roman road Pollenzo crossed it. After the Romans left the castle became owned by the Knights Templar who owned it for more than 300 years. After that it had several other owners and was the scene of two bloody battles (1639 and 1706). The castle is rumored to be built on top of a Ley Line which increases the amount of paranormal energy.

At the end of the 20th century, the castle was left to decay and used as a dump for unwanted construction materials. Because of the decay and its remoteness, people started calling it the “haunted house” or the Castle of Fear. Locals tried to avoid the castle. Decades later, things were finally looking up for the castle. Being the former home of the Knights Templar gave it the historical importance it deserved. Castello Della Rotta was cleaned up and restored. But then they stumbled upon something grisly.

During the restoration, people made an eerie discovery. Several skeletons were found, including a knight buried along with his horse. The man wore a large iron cross around his neck, which indicated this might have been a Templar Knight.

Many legends and ghost stories

Castello Della Rotta holds many legends and ghost stories, although they’re hard to verify for the castle is privately owned today and not open to the public. One of the ghost sightings has everything to do with the skeletal remains they found. People claim the grounds are haunted by an armed knight on horseback. But there is more.

The ghosts of Maniero Della Rotta

In 1400, a priest was sentenced to death for plotting horrible crimes. He was beheaded for his plans and he’s still seen wandering the castle grounds with his head in his hands. A blonde pretty woman also haunts the castle. She is said to have committed suicide for being in a violent and unhappy marriage. Other ghosts are those of a reading cardinal and a man dressed in black. And each year, on the night of June 12 and 13, a ritual procession of ghosts walks the castle grounds. But there are a couple of legends, too.

The legend of the Monk

The ghost of a hooded monk is one of the most frequent sightings. Legend says a former owner and nobleman fell in love with a beautiful noblewoman. On their wedding day, the ceremony was brutally interrupted by an attack by the Saracens. Some of these men chased the young bride to the top of the tower. She had only one option to escape her attackers and she jumped off the tower. The nobleman fought the intruders all night, but when he saw the lifeless body of his love, he decided to leave for the Holy Land to become a Templar Monk to take revenge on all infidels who were responsible for killing the love of his life. He still haunts the castle in search of the killers of his love.

The legend of the naughty child and his nanny

Long ago Castello Della Rotta was home to a naughty little boy. His nanny had her hands full with him for he didn’t listen and constantly tried to escape her. Her job was to keep him out of trouble, and she did a good job until the day he escaped her again. She had been looking all over the castle and its grounds and was just about to catch her breath in the courtyard when she suddenly spotted the little plague, who was smiling defiantly at her. She got furious and screamed at the boy. This shocked him and when he turned to run again, he was hit by a horse-drawn-carriage and was killed instantly. The nanny was in total shock, she ran to the kitchen and took her own life. Today, both the child and the nanny haunt the castle.

As I mentioned before, Castello Della Rotta is privately owned today. Of course, you can take a look around the castle from the outside, but entering its grounds is against the law. Still, it’s a wonderful piece of Italian history!