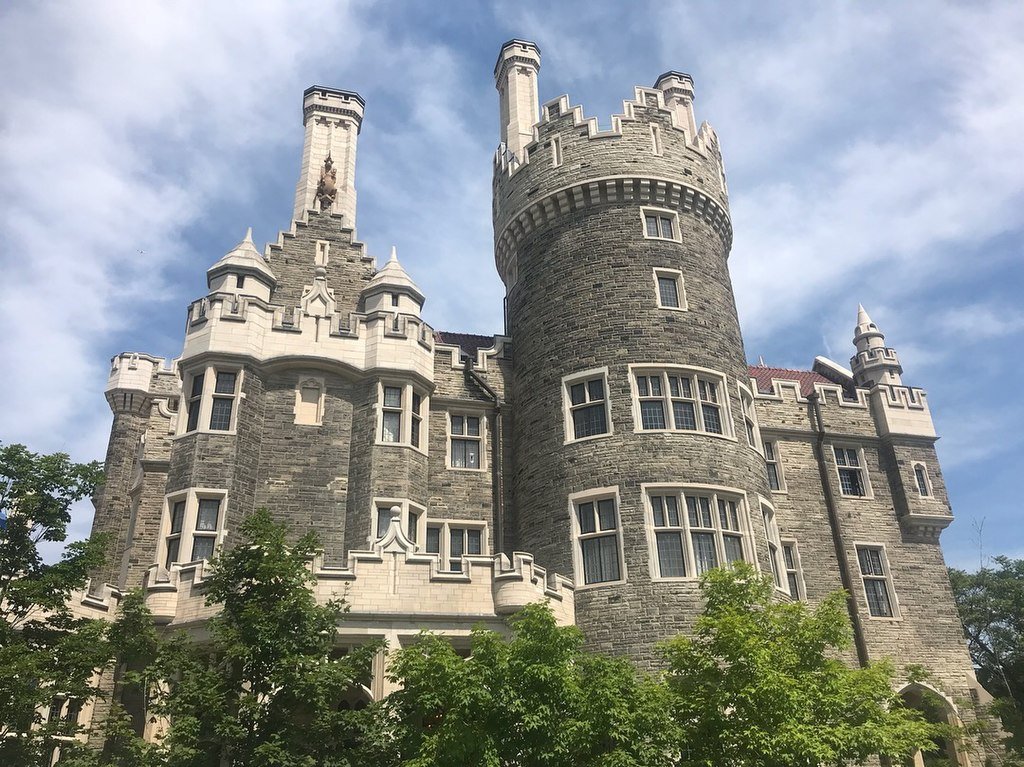 Casa Loma is a Gothic Revival mansion in Toronto, Canada. The name means “House on the Hill” in English and was constructed by the Canadian financier and soldier Sir Henry Pellatt. He built the house for his wife Mary. But, unfortunately, they were only able to enjoy the comfort of the house briefly.

The history of Casa Loma

Inspired by his travels to Europe, Sir Henry Pellatt wanted to build him and his wife Mary a castle on the hill. He wanted the house to overlook the city of Toronto. Architect E.J. Lennox, who designed several historic landmarks in the city, was asked for the job. The mansion resembles an English castle, one of Sir Henry’s wishes, for his ancestors were English. The first buildings to be built were the stables. Sir Henry wanted his prize winning horses near him. A tunnel connects Casa Loma to these stables. Sir Henry and Lady Mary didn’t live at the mansion for long: after nine years they were forced to leave their beloved castle because they ran out of money.

The City of Toronto takes over

When the Pellatt’s sadly left their home, it was taken over by the City of Toronto. Due to its unique architecture, the house became a popular filming location and historic landmark. It was also turned into a museum which draws many visitors each year. It’s also a popular wedding venue and, after closing time, one can even rent the whole castle. The seven-storey high building has housed a vintage car exhibition since 2014. Casa Loma also has 5 acres of gardens and the hunting lodge and the stables still stand.

The ghosts of Casa Loma

Even though there are no documented deaths at Casa Loma, the mansion is definitely haunted. Guests and staff have reported phenomena they cannot explain. Disembodied voices, sounds of footsteps and doors that open on their own accord. Plus, several people have seen apparitions at the house. Let’s take a closer look at the hauntings.

The Lady in White

Casa Loma is haunted by a mysterious woman in white. She has also been seen in the building’s basement. No one seems to know exactly who she is and why she haunts the mansion. Some believe that the Lady in White is the spirit of a maid who worked at the mansion in the early 1900’s. Around that time, more that 60,000 citizens of Toronto died of Influenza. She usually shows herself at the end of the day, when cleaning and cafeteria staff are cleaning up.

Sir Henry Pellatt never wanted to leave Casa Loma. He loved the place and it must have angered him that he was forced to leave. The spirit of a man resembling him has been seen inside the home. A young boy, visiting the mansion with his parents, saw a man standing in front of a window on the second floor. The boy alarmed a staff member, who was working in the garden. She panicked because the second floor was supposed to be closed to the public. When the boy described the man he saw, she showed him a picture of Sir Henry. He immediately confirmed it was him he saw. But he was puzzled: why did that man look so angry?

Sir Henry is not the only frequent visitor of his former home. His wife, Lady Mary, has been seen at the mansion as well. Her spirit has been seen wandering through the house and the gardens. According to psychics, Sir Henry and Lady Mary aren’t trapped at Casa Loma. They are simply regular visitors of their former home. It must frustrate them that their home is invaded by tourists every day.

The ghost in the tunnel

The tunnel connecting the mansion to the former stables is haunted as well. A grumpy man, who’s now known as “Mr. Happy”, which is obviously a sarcasted name, likes to grab people in the dark and pull people’s hair. Some psychics who have tried to communicate with him, claim he was a dear friend of Sir Henry. He was hired to take care of the prize winning horses. He certainly doesn’t feel the need to leave the tunnels, so beware if you enter them!

Casa Loma is open seven days a week. Tours are available, as well was ghost tours. Each year, around Halloween, the mansion is turned into a huge haunted house. The castle-like mansion was used in many movies and television programs, such as X-men, Crimson Peak, Titans and many more. But, did you also know it was featured in R.L. Stine’s Goosebumps series “A Night in Terror Tower”? And that it was briefly transformed into Hogwarts for the release of “Harry Potter and the Deathly Hallows”? Why don’t you see for yourself!

Do you want to read more ghost stories about haunted places in Canada? Click here!