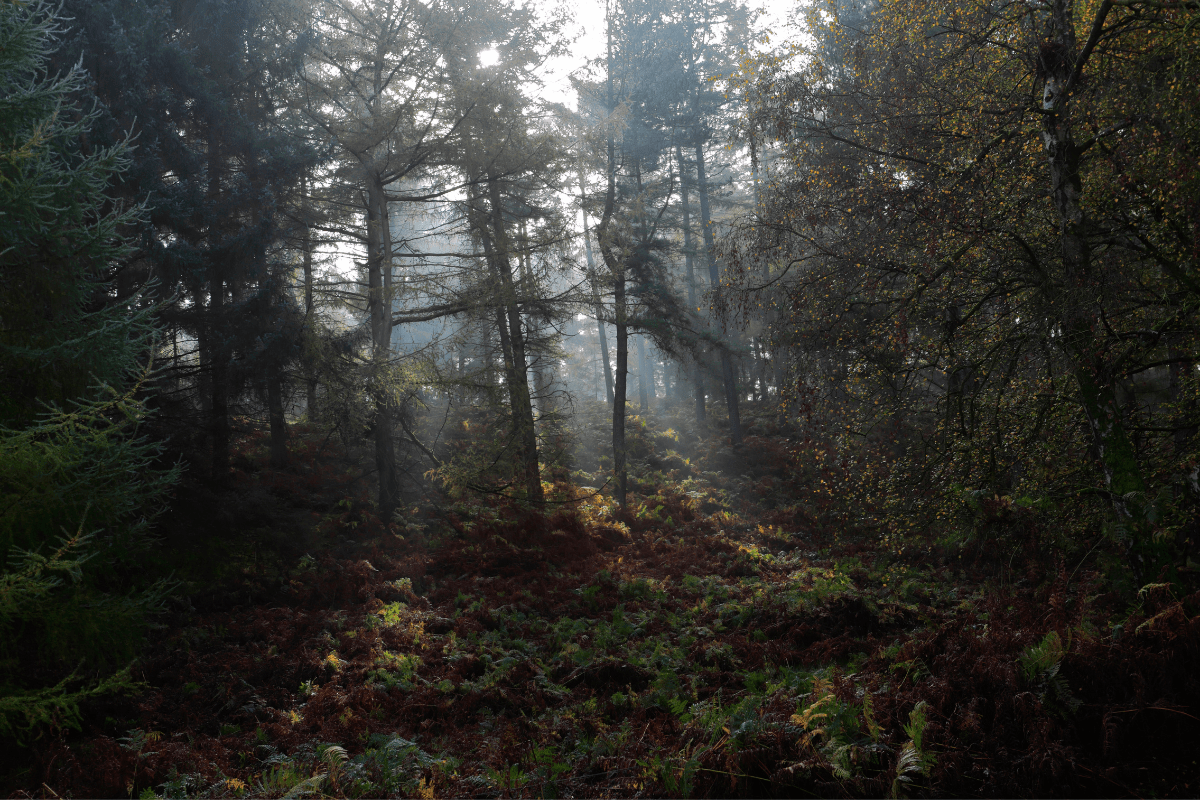 Cannock Chase Forest, locally known as The Chase, is located in the north of Birmingham, Staffordshire. The forest was designated as the Cannock Chase Area of Outstanding Natural Beauty. But it is also believed to be a portal to another world. And the supernatural inhabitants can travel to and back from it.

The history of Cannock Chase

The former Royal forest, Cannock Chase was formed during the Triassic period. The forest consists of a mixture of woodland, coniferous plantations, open heathland and small lakes. Remains of early industry, such as coal mining, can be found as well. Cannock Chase has many activities to offer. It’s very popular among mountain bikers, hikers and a Go Ape route high above ground. The forest is also a great place for families. There’s a big children’s playground, several picnic areas, a Superworm Trail, and several wooden statues of the Gruffalo. There’s a number of marked and unmarked public paths for a nice stroll in the woods.

Shugborough Hall, the ancestral home of the Earls of Lichfield, can be found on the north-eastern edge of the forest. This hall is haunted! Lady Harriet, who died during childbirth still haunts the building. And a former housekeeper is said to haunt the kitchens. Staff claim that they often hear the rustle of her skirts and have seen her figure pass the window. The remains of Castle Ring, on its southern edge, is also interesting. It’s an Iron Age hill fort, built on a height of 242 m (794 ft). This is the highest point of Cannock Chase.

Cannock Chase has several war memorials that can be visited. One of these memorials is that of the Katyn Massacre. In 1940, 22,000 Polish military officials were murdered in mass executions in the forest of Katyn, Russia. The memorial was unveiled by Stefan Staniszewski, whose father, who was a high court judge, was killed during these horrors. The Katyn Memorial is located within the pine forest area. The memorial is erected here because Cannock Chase resembles the Katyn Forest. And The Chase has an abundance of military connection to both World Wars. There are also Commonwealth war cemeteries in Cannock Chase.

In the late 1960’s the forest gained notoriety when the bodies of three little girls were found. The Cannock Chase Murders, also known as the A34 Murders and the Babes in the Ditch Murders imediately made the headlines. The girls found were between 5 and 7 years old and the murders occured between 1965 and 1967. A man named Raymond Leslie Morris was arrested in 1968 while he attempted to abduct a potential fourth victim. He was linked to at least one of the three murders and was sentenced to life imprisoment. The Monster of Cannock Chase died in prison in 2014, aged 84, after serving 45 years.

Cannock Chase is rumoured to be a portal. Supernatural creatures, such as werewolves, Black Dogs (demonic entities), UFO’s, British Big Cats (phantom cats) and even Bigfoot have been sighted here. In the 1940’s, a creepy Pig Man was seen and there are several claims of people seeing a Black Eyed Girl. People claim to hear a child’s scream and when they search for the child, they see a young girl of about 10 years of age. She appears to be made of flesh and blood. The child is said to have her eyes covered, but when she removes her hands, her eyes are completely black. Then she giggles and disappears. The Black Eyed Girl has been sighted over the course of 30 years.

Over at Castle Ring, a man saw a figure resembling Slenderman. When the tall figure in black approached the man, he fled in terror. He later claimed the man wore a long Victorian overcoat, had red eyes and a mouth full of teeth that looked like razors. Castle Ring has a sinister reputation. Once it was home to a Celtic tribe known as the Cornovii. They are believed to have performed satanic rituals and blood sacrifices on the hill.

The ghosts of Cannock Chase

As if these sightings aren’t enough, there are also ghosts that haunt Cannock Chase. Soldiers have been seen running through the woods, especially near the war cemeteries. The ghost of the First Marquess of Anglesey is spotted several times. Cannock Chase was his favorite hunting forest. Another ghost that has been seen is the ghost of an old man with a cane and wide brimmed hat. The ghost of a bedraggled woman, a ghostly parachutist and a phantom cyclist have been reported. Another ghost is that of a young monk who seems lost in the woods. What an active forest!

Do you want to read more ghost stories about places in Europe? Click here!

The Palace of Versailles: a building, just outside Paris, which started off as a modest hunting lodge for King Louis XIII, is now a massive building surrounded by an enormous garden. On its peak, more than 10.000 people lived and worked at this French palace. So much history on one location can only mean one […]
Bolling Hall is one of the oldest buildings in Bradford, West Yorkshire, England. Perhaps even the oldest building. It has had many different residents through the centuries. but Bolling Hall has been a museum and education center since 1915. And it’s haunted by no less than 20 ghosts including one or more malevolent ones. The […]
The Fairmont Banff Springs Hotel, commonly known as The Banff Springs Hotel, is located in Banff, Alberta, Canada. The entire town including the hotel, is situated in Banff National Park. It has a breathtaking view on the valley, overlooking Mount Rundle. This all sounds like the perfect hotel, and it is! Especially for lovers of the paranormal.   The history of the Fairmont Banff Springs Hotel  The hotel opened its suites in 1888 by the Canadian Pacific Railway […]
Alton Towers Resort is the largest theme park in the United Kingdom. It attracs more than 2 million visitors each year, making it the second most popular theme park in England. It was built around an already existing manor house which was built in 1753. The manor house is now part of the park, and […]