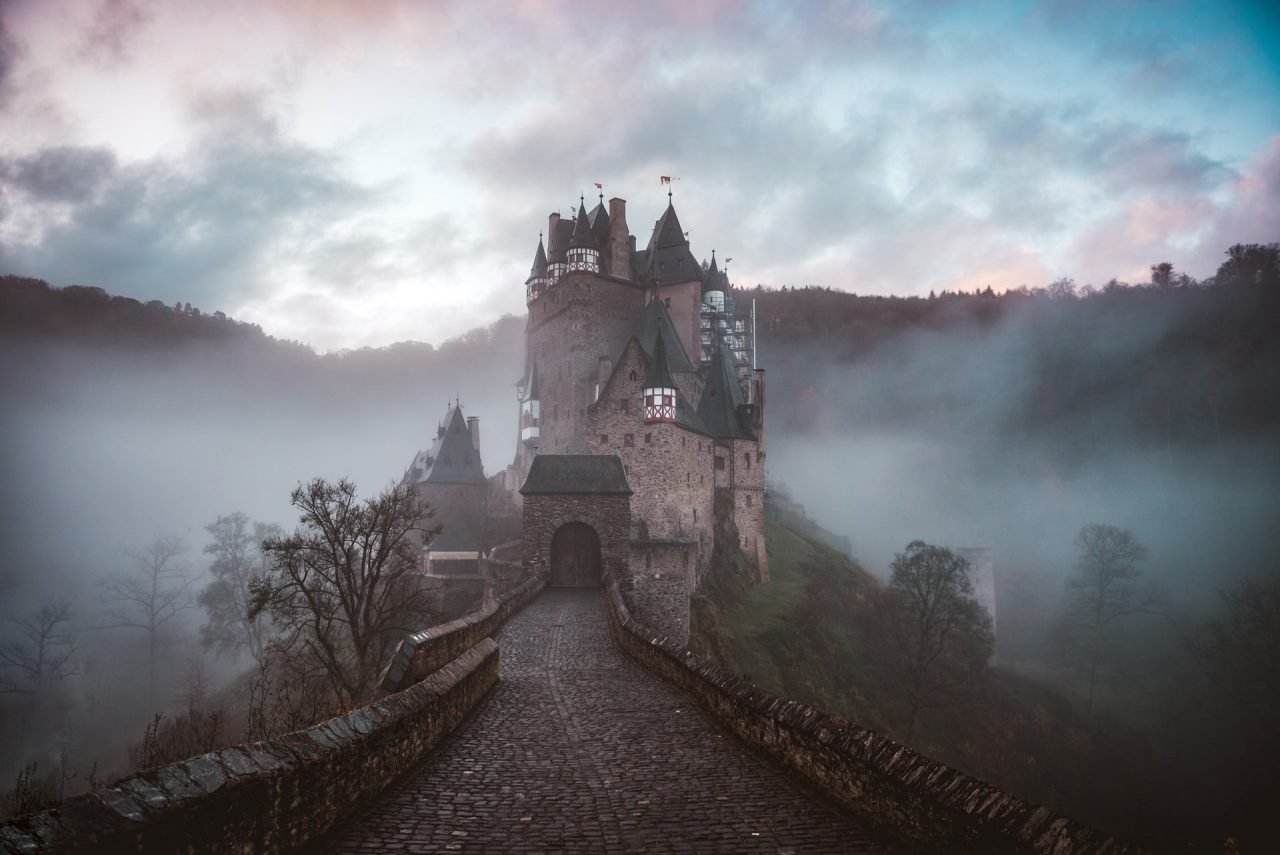 The breathtaking medieval Burg Eltz, or Eltz Castle, can be found in the hills of the German town Wierschem, between Koblenz and Trier. Burg Eltz is one of the few castles in the area that was never destroyed during a siege and it can be visited today. This castle used to be the home of a very brave young lady, who met her end tragically and still roams the castle.

The history of Burg Eltz

The oldest part of Burg Eltz, Platteltz, was a simple manor built in the 9th century. This part still exists today. The rest of the castle was formed around it, dating from 1157. Both medieval and Renaissance styles are mixed, giving the castle a fairytale-like look. It was the home of the Counts of Eltz and still is, 33 generations later! Back in the days, only wealthy medieval European lords could afford a castle of their own. That’s why Burg Eltz is a so-called “Ganerbenburg”; a castle divided in several parts which belonged to different branches of the family. All families owned their own part of the castle but all of them together shared the defensive fortification. Burg Eltz was resided by three family branches. The servants, craftsmen and other families who supported the Eltz Family, lived in the village below the castle.

Burg Eltz is located on a 70 m (230 ft) high rock spur which was the center of a highly important Roman trade route between rich farmlands and the markets. You’ll now find it amid The Eltz Forest, which has been declared as a nature reserve by Flora-Fauna-Habitat and Natura 2000. It’s quite amazing this castle is still in one piece. All other castles in the area have been (partly) destroyed in battles over the years. Burg Eltz still stands in its former glory, which was mainly due to the many alliances the family had in the area and across Europe. But there was one siege which could have been the downfall of the castle.

Burg Eltz was involved with one major dispute. The Eltz Feud (1331 – 1336) was a fierce battle fought between the Lords of Eltzer, together with some other free imperial knights against the Archbishop and Elector Balduin (Baldwin) von Trier. He wanted to re-incorporate the knights of the castles Ehrenburg, Eltz, Schöneck and Waldeck. The Archbishop even built a small siege castle (counter castle) not far from Eltz called Trutzeltz Castle. This is now a ruin which can still be seen today. The siege lasted for two years and was ended when the knights gave up their imperial freedom.

There’s a beautiful yet tragic story attached to Burg Eltz. Agnes Eltz was the daughter of the 15th Count of Eltz and was raised with brothers only. The girl wasn’t like other girls, she loved playing “warrior” with her brothers. Agnes was promised to the Knight of Braunsberg, and the two met occasionally to get to know each other. Agnes didn’t like the knight at all. She thought he was boring and ignored him. Her persistent attitude angered the knight and during a festive event he pulled Agnes onto the dancefloor and kissed her.

Agnes got so angry she smacked him in the face. The Knight of Braunsberg was infuriated and fled the castle. The family was afraid he’d be out on revenge, so they doubled the guards just to be sure. Days went by, weeks turned into months and still nothing happened. The Eltz family let their guard down and all the men went on a three-day hunting trip, assuming the Knight of Braunsberg lost his interest. But that was what the knight had been waiting for and he attacked the castle that same night. The guards at the gate were murdered and the knight and his troops entered the castle’s courtyard, killing everyone who was in their way.

When Agnes saw what happened, she didn’t hesitate. She took her brother’s helmet, breastplate and battle-axe and she threw herself into the fight. The knight was startled by the unknown fierce knight and he decided to defeat him on his own. He shot the knight up close with his crossbow, and the arrow penetrated the armor, killing the brave knight instantly. When he removed the knight’s helmet, he discovered he shot his beloved Agnes.

The ghosts of Burg Eltz

The most haunted room at Burg Eltz is the Countess Room, the room which belonged to Agnes. The armor in which she died, and the battle-axe are also in here. According to the staff, Agnes haunts the hallways as well, switching lights on and off and opens and closes doors. Is she still protecting the castle against attacks? Whispers are heard in the hallways as well as child giggles. The castle’s staff sometimes find all doors unlocked by the morning, even though they locked them at night. There are claims of a phantom medieval knight on horseback at the gate. Some believe this is the Knight of Braunsberg looking for Agnes’ forgiveness.

Burg Eltz is open to the public and it’s well worth the visit. The castle has a very nice treasure room full of golden, silver, ivory and China items and there’s a lot of historical weapons as well. And perhaps you’ll run into Agnes while you’re there.