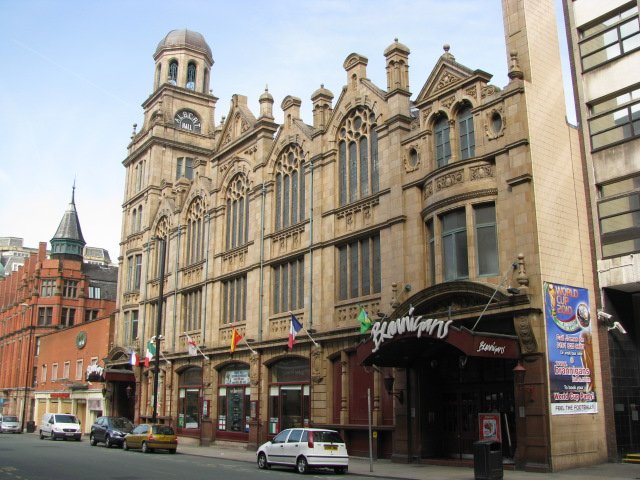 Brannigans was one of the most popular nightclubs in Manchester, England. It closed its doors in 2011 and was re-named The Albert Hall. Where once different beats were heard, now concerts are played. Why did the nightclub close? Was it due to insufficient funds or was something else to blame? Something seems to be hanging around in the former nightclub and it’s not friendly!

The history of Brannigans Nightclub

The building where Brannigan’s Nightclub was located, used to be a former Methodist Meeting Hall. The huge church organ, the largest in Britain, still proudly stands in the hall. Reverend Samuel Collier wanted this building on Peter Street to become his church, the Wesleyan Mission. So, he called in the help of architect William James Morley who started building in 1908. The Methodist Church opened its doors in 1910. The building managed to survive the Blitz and services continued all through WWII.

Some members of the church later stated the sounds of war were locked out by intensifying the organ play. The church was closed 9 years after Samuel Collier died and it was left vacant for some time. In the 1990’s, the two lower floors were converted into a nightclub. In 2011, the nightclub was closed due to insufficient funds and, after a big renovation, was turned into a music hall.

The hall was designed in eclectic style with Baroque and Gothic elements. Most of the glass stained windows are still intact. The second floor, the Chapel Hall, was not in use by Brannigan’s Nightclub so this floor remained empty since the Methodists left the church in 1969. It was renovated during the period 2012 – 2014 and now used for music concerts. The tower is also still intact, but not many people dare to enter this area. This area is the domain of a malevolent spirit.

The ghosts of Brannigans Nightclub

There are several ghosts that haunt the former church /nightclub. But you might not be surprised to read that Samuel Collier is one of them.

The ghost of Reverend Samuel Collier

Samuel Collier haunted the bar area when Brannigans was still a nightclub. He was notorious for smashing glassware, turning lights on and off and was said to create sudden temperature drops. Former employees and visitors of the nightclub have experienced the whims of the unhappy ghost of the Reverend. He probably didn’t like the drinking and, in his eyes, the unsound behavior of the young people inside his church. But he serves a greater purpose today and that is to keep the malevolent spirit inside his tower.

Poltergeists and two other religious ghosts

Reverend Samuel Collier is not the only religious ghost at the hall. Two other male clergy men, probably priests, help him to keep the dark entity in its tower. This is said to be the ghost of Godfrey Parks. This is an aggressive and possessive spirit. According to a medium by the name of Derek Acorah (host in “Most Haunted”) this Godfrey killed at least one little girl. She is also trapped in the hall and her screams can be heard occasionally. Poltergeist activity is frequent here, such as loud bangs and footsteps. Would you dare to spend a night alone here?