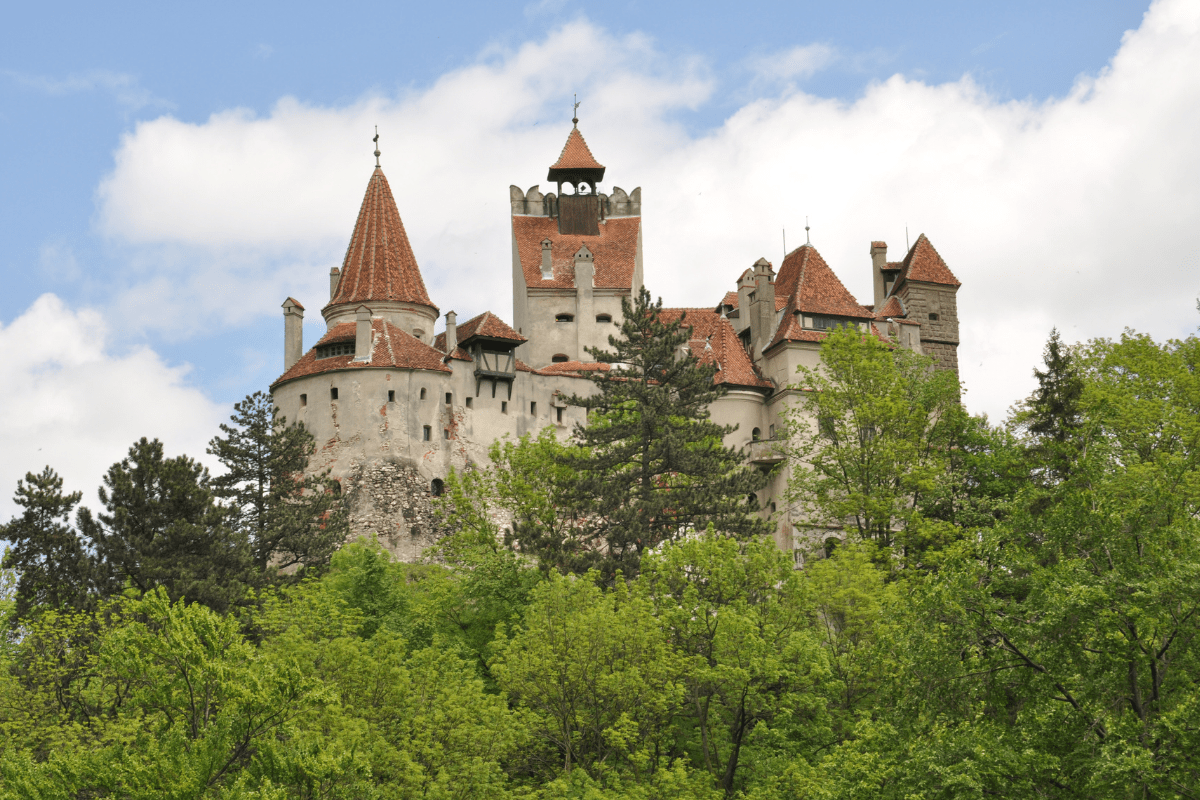 In the European country Romania, you’ll find a fortress that is commonly known as Dracula’s Castle. The real name of this castle is Bran Castle, or Castelul Bran as it is called in Romania. Many legends surround this medieval stronghold including the legend that the ruthless Wallachian ruler, Vlad The Impaler, used to live here and that he still haunts this place. But is there any truth in that? Let’s find out!

The history of Bran Castle

The location on which Bran Castle is built, used to be important as it was near the border of the historical regions Transylvania and Wallachia. First, it was occupied by the Knights of the Teutonic Order, who built their wooden fortress there in 1211. The wooden construction was destroyed in 1242 by the Mongols and the Teutonic Knights were driven from the area. Over a century later, King Louis the Great also known as Louis I of Anjou, wanted his castle to be built on this exact spot. He urged the Saxon people (German settlers known as Sachen, not to be mistaken with the English Saxons), to help him build his castle.

The construction was completed in 1388. It served as a fortress (against the expansion of the Ottoman Empire) and a custom house for goods transferring in and out of Transylvania. Mainly professional soldiers and mercenaries lived at the castle. The lord of the castle, often of Saxon origins, was elected by the King. The castle was given as fief (a property given in return for loyalty) by King Sigismund to Prince Micrea, Elder of Wallachia and older brother of Vlad III (I will get back to him later).

The political instability of Wallachia

The Turks raided Transylvania in 1441, but John Hunyadi (Iancu de Hunedoara) defeated them in Bran. He was the Regent-Governor of the Kingdom of Hungary and the Voivode (ruler) of Transylvania. Vlad Dracul was the Wallachian Ruler at the time. He and Prince Micrea were killed when John Hunyadi invaded Wallachia in 1447. Vlad III, his second son (also known as Vlad Tepes, Vlad Drăculesh as well as Vlad the Impaler) was a Wallachian Prince who was held hostage by the Ottomans to secure Vlad Dracul’s loyalty.

Vlad III invaded Wallachia with Ottoman help but had to seek refuge in the Ottoman Empire shortly after. He invaded Wallachia again in 1456, now with Hungarian support. The Wallachian Prince came in conflict with the Transylvanian Saxons who supported his opponents. He then started burning Saxon villages down and impaled the captured Saxons on stakes. His ruthless reputation was the inspiration of Bram Stoker’s Dracula.

Bran Castle lost its military and commercial importance after the border of Transylvania and Wallachia was moved to the mountains. It continued as an administrative seat. In 1888, the administration was moved to another place and the castle fell in desrepair for over 30 years. Later it was inhabited by foresters, woodmen and forest inspectors from Brasov. That continued until 1918, after Transylvania became part of Greater Romania. It was then offered to Queen Maria of Romania in 1920. Bran Castle became her favorite residence.

After Queen Maria died in 1938, her heart was placed in a silver box that was kept in the crypt of the castle. Her daughter, Princess Ileana, built a hospital inside of Bran Castle, naming it “The Hospital of the Queen’s Heart” in 1944. Wounded soldiers from Brasov were treated here after American Aircrafts bombed the Red Cross Hospital. She worked as a nurse there herself until 1948.

Princess Ileana and her family were forced to leave the country in that year because of the newly installed communist regime. Bran Castle was turned into a museum but due to the war there was a lot of damage to the castle. It was restored and opened again in 1987. In 2009, Bran Castle was returned to the legal heirs, Archduke Dominic, Archduchess Maria Magdalena and Archduchess Elisabeth. The castle remains open to the public.

The legend of Dracula

Many claim Vlad the Impaler haunts Bran Castle, but I didn’t find any evidence of him ever living at the castle. His name is often confused with Count Dracula, the fictional character created by the Irish author Bram Stoker. Bram Stoker never visited Romania, and he never laid eyes on the castle in person, but Bran Castle resembles the castle he described in his book.

In the villages near Bran, people believe in the existence of evil spirits named Steregoi (a variant of Strigoi). These spirits are normal people by day, but at night their soul leaves their bodies to haunt and torment other people in their sleep. These Strigoi spirits are looked upon as “undead”. So, there is another connection with Bram Stoker’s novel. But even though Vlad the Impaler doesn’t haunt the castle, doesn’t mean it’s not haunted at all.

The ghosts of Bran Castle

Bran Castle is a mysterious place, with several secret passageways and hidden rooms. It’s literally fuel for ghost stories. Haunted Happenings, a British Ghost Hunters organization, has been to Bran Castle before. They claim that stones have been thrown at them in the pitch-black tunnels underneath the castle. Some of them have seen strange, green mists. People claim there is a dark and sinister presence down in the tunnels which makes people feel unwell. Shadow figures have been seen, as well as full apparitions of soldiers, peasants and warriors. Even though the blood thirsty Wallachian prince does not haunt the castle and grounds, it doesn’t make this place any less interesting!