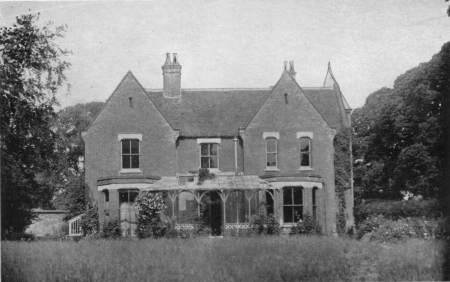 In 1862, just steps away from Borley Church (Essex, England) a rectory was built. Borley Rectory replaced the old rectory, which was destroyed by a fire in 1841. Ironically enough, the new Borley Rectory caught fire as well and was so heavily damaged it needed to be demolished in 1944. Even though it no longer exists, it’s still the talk of the town.

The history of Borley Rectory

Borley Rectory was built next to Borley Church which was erected in the 12th century to serve the residents of three smaller hamlets: Borley, Borley Green and Borley Hall. According to historical documents, there used to be a Benedictine monastery, named Barking Abbey, at Borley Hall. The town of Borley Hall was given to the important Waldegrave Family by Henry VIII.

There’s a legend about Barking Abbey. A monk who was living there had a forbidden love affair with a nun from a nearby nunnery. They wanted to take off together, but unfortunately, they’re affair was discovered. The monk was sentenced to death by hanging and the nun was walled up alive inside the nunnery walls. According to the legend, the nun can’t find peace and she’s still looking for her lover. But it seems that the nun has found her way to the rectory as well.

Referend Henry Dawson Ellis Bull moved into the new Borley Rectory when it was built in 1862. Because of his big family, he had 14 children, he enlarged the house by adding an entire wing. The first ghost stories came to light while they lived there. The children started seeing a black ghost coach ridden by two headless men and the apparition of a nun in the backyard, but she was also seen inside the house. Henry Bull allegedly even bricked up a window in the dining room so that the family might enjoy dinner without the spectral nun peering at them. Heavy footsteps were heard, and other strange phenomena were claimed. Henry Bull died inside the rectory in 1892. His son, Harry Bull, took over from his father. When Harry died in 1928, the rectory stood empty for a couple of months.

In October that same year, Borley Rectory became the home of Referend Guy Eric Smith and his wife. While cleaning the rectory, Mrs. Smith stumbled upon a female skull wrapped in a newspaper. Referend Smith wasn’t particularly alarmed by the discovery and gave the skull a proper burial. However, shortly after the discovery, the couple started noticing strange things. The service bells started ringing by themselves even though they were disconnected, and lights were seen behind the windows when no one was around.

The hauntings started every evening when the couple retired for the night. Each night they were stalked by the sound of heavy footsteps walking right passed their bedroom. They never saw anyone. But there were more hauntings. A moaning female was heard from the center of an arch leading to the chapel, inaudible whispers were heard inside the house and keys were dislodged from their locks and found several feet away from their doors. The Smith’s contacted the Daily Mirror with their stories and through that they were contacted by Harry Price, a paranormal investigator, who had also been involved with the Raynham Hall hauntings.

Paranormal investigator Harry Price couldn’t wait to investigate the rectory. He arrived June 12, 1929, and immediately all kind of activity took place. While Price was having lunch with the Smiths, a candlestick made of glass struck an iron stove near Price’s head. He was showered with splinters. Stones, vases and other objects were thrown around and “the ghost” started sending messages through the mirror. The phenomena disappeared immediately when Price left the rectory. Even though the hauntings were very real, the sudden increase of the hauntings when Price was about, was a bit odd to the Smiths. The Smith’s left the rectory July 14, 1929. They were emotionally drained because of all this.

It was hard to find a replacement for Referend Smith and it wasn’t until October 1930 when Referend Lionel Foyster, his wife Marianne and their 4-year-old daughter moved into the rectory. Referend Foyster was a cousin of Caroline Foyster Bull, the wife of Henry Bull, so he knew the stories. Shortly after they moved in, Marianne heard a whisper saying “Marianne, dear”. She ran up the stairs, thinking it was her husband calling her, but he hadn’t said anything. Other things started to happen and it seemed only Marianne was targeted. Her wristwatch disappeared and while carrying a candle upstairs on the way to their bedroom, she received such a violent blow in the eye that the mark was seen for several days.

But that was not all. She was pulled from her bed by an unseen force, she was nearly suffocated by a pillow and windows shattered by themselves around her. Then, handwritten warnings started appearing on the walls. Marianne was warned for all kinds of danger. She even encountered a grotesque entity on the staircase, which looked like some sort of ape. The Foysters contacted Harry Price again for help and he was eager to come. When he, his assistant and chauffeur arrived at the house, Harry and his assistant went up to the attic to explore. Harry had an empty wine bottle thrown at him when he entered, and his chauffeur suddenly started screaming from the kitchen that he had seen a huge dark hand that crawled across the floor.

Later it was discovered Marianne caused the poltergeist activity herself to draw her husband’s attention away from a secret love affair she was having. They left the rectory October 1935. Again, the church had trouble finding a replacement for the Foysters. It was on the market for a while until Harry Price took his chance.

Harry Price leased the rectory for a year and he even took 48 volunteers with him to thoroughly investigate the place. Together with some of these volunteers, Price held a séance at the rectory. Two spirits allegedly came forward. Price claimed these two ghosts were the cause of all the activity. The first ghost to come forward was a French nun, named Marie Lairre. She left the order when she fell in love with a member of the Waldegrave Family. They got married, but it wasn’t a happy marriage. Marie was murdered by her own husband and her body was dumped in the rectory’s basement. A second ghost, named Sunex Amures, told Price and the volunteers the rectory would be destroyed by a blazing fire on March 27, 1938. That fire would unearth Marie Lairre’s bones.

Late 1938, after Price’s lease was up, a new buyer was found. Captain W.H. Gregson bought the rectory renaming it “The Priory”. Gregson was a skeptic and didn’t care for the ghost stories. But on the first day he set foot in the house, his old much-loved dog became wild and fled the house, never to be seen again. He also found some strange looking footprints in the snow. February 27, 1939, tragedy struck, and the house was destroyed by fire. Gregson claimed some books flew off the shelves, knocking over a lamp which exploded into flames immediately. He barely made it out alive. So, the ghost was right about the fire, even though it happened 11 months later. Indeed, Marie’s bones were found. She received a Christian burial. The unearthing was led by Price himself, who still hadn’t gotten over his obsession for the rectory. The rectory was demolished in 1944 and Price himself died four years later.

Harry Price had written two books on Borley Rectory, but there are some question marks there. Another book was released on the rectory, written by Louis Mayerling in December 2000. The title of the book was: We faked the ghosts of Borley Rectory. In the book he claimed that Borley Rectory had been like a second home to him at the time the Bull’s lived there. He said the children loved the ghost stories and liked to frighten others with them. Even Henry Bull participated in the fantasy, claiming he bricked the window in the dining room up because of the nun, while in fact he did so because he wanted it gone anyway. The fact that Marianne Foyster used the ghost stories as a cover up doesn’t do the ghost story much good, either, but how do you explain the stories of the Smith family? What’s your opinion on this house?