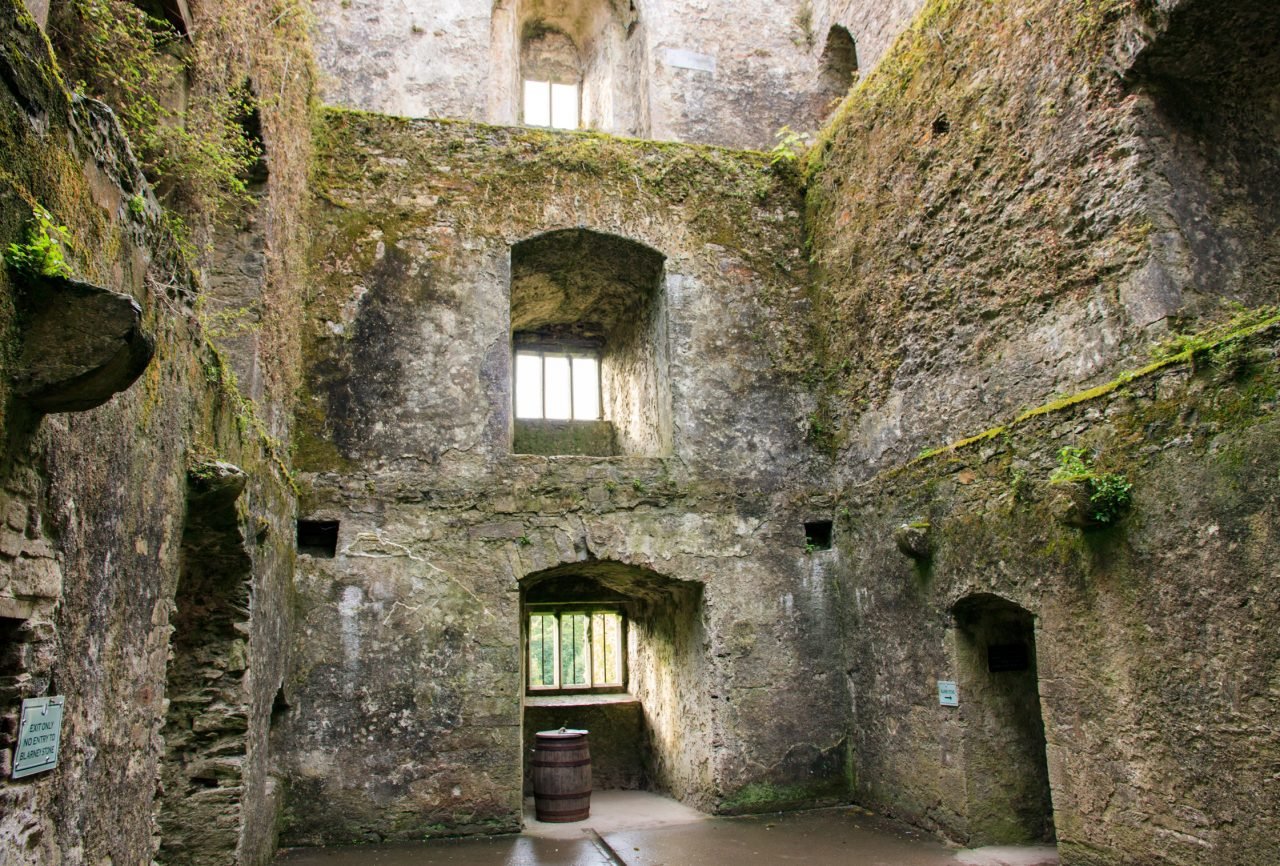 Blarney Castle, or Caisleán na Blaran, is an Irish medieval stronghold in Cork, Ireland. Today, the castle is a very popular tourist attraction. Especially the Blarney Stone, which everybody wants to kiss. But keep your hands to yourself, and don’t even think about removing a stone from its terrain. You will be very sorry if you did…

The history of Blarney Castle

Blarney Castle was originally built in 1200, but by then it was no more than a wooden structure. Around 1210, it was replaced with a fortification made of stone, but it was destroyed in 1446. In that same year, the castle was rebuilt by a man named Cormac Laidir MacCarthy, Lord of Muscry. The castle was unsuccesfully besieged a couple of times until the year 1646. This is when Lord Broghill, the 1st Earl of Orrery, managed to claim the castle. But there was a catch. I’ll get into that later. The MacCarthy family later re-claimed the castle.

During the Williamite War in the 1690’s, it was confiscated by the Williamites after they captured its then owner, Donough MacCarthy. After that period the castle was sold a couple of times until it was bought by the Jefferye Family. The castle’s house was destroyed by a fire in 1874 and replaced again by them. They did find another spot for it, near the keep, overlooking the lake. The house, which is now known as The Blarney House, now belongs to Sir Charles St. John Colthurst. The Colthursts married into the Jefferye Family. The castle nowadays is a partial ruin with some accessible rooms and battlements.

When Lord Borghill took the castle in 1646, he fired a cannon into the tower walls from card Hill. But when he got there, the castle was completely empty! The main garrison, along with a large golden plate (which Lord Borghill wanted to have), escaped the castle through an underground labyrinth of tunnels. One of these tunnels led to Cork, another to The Lake and the last one even all the way to Kerry. They were too clever for him! These tunnels are now named the Badger Caves and they are partly accessible. The passages and chambers inside the tunnels are from different periods. It is believed that the castle’s dungeon and prison cells were down here. There is also a well which was of great importance.

The Blarney Stone, or the Stone of Eloquence, is the main tourist attraction of the castle. Legend says, Queen Elizabeth I had set her mind on the castle. She sent her envoy, the Earl of Leicester, to claim the castle, the lands and MacCarthy’s rights. Cormac Teigh MacCarthy (a descendant of the other Cormac MacCarthy), was the owner at that point, and not a very good speaker. He met an old woman, who was said to be the Goddess Clíodhna. She told him to kiss the Stone of Eloquence. Whoever did that, would never be short of a word. So, Cormac kissed the stone.

He invited the Earl of Leister to his banquet and talked so sophisticatedly that the earl had no other option than to disappoint Elizabeth I. So, kiss the stone and you’ll be able to smart talk yourself out of every situation. BUT, kissing the stone isn’t so easy to do. You’d have to lay on your back with your head dangling down a steep abyss. Luckily, nowadays an assistant will give you a hand. Another legend says this stone is the Lia Fáil; a magical stone upon which kings were crowned.

Ireland has its share of myths and legends. And, this castle has a few. Legend says that the large, golden plate MacCarthy and his garrison had taken to safety during the 1646 siege, is now in the depths of the Lake. The treasure is said to be down there to this day. And there is the rock garden. Some of the stone’s strange shapes have inspired many to nickname some stones. There is, for instance, a Druid circle, the Fairy Glade, the wishing steps, the witch’s cave and the witch’s kitchen.

Legend says there really is a witch at Blarney castle. The witch is held prisoner during daytime, but she escapes during the night. She wanders to Witch’s kitchen where she makes a fire to stop shivering from the cold. If you are to arrive very early in the morning, you’re still able to see the dying embers of the fire. On the meadows near the Martin River, a herd of enchanted cows are seen when danger lies ahead. So, it’s best not to see any cattle there.

The ghosts of Blarney Castle

Blarney Castle is centuries old so it’s not a surprise to hear it is haunted. Footsteps and voices are heard within the castle walls, but that’s not all! The Martin River is haunted as well! Not by human ghosts, but by long-dead salmons. These salmons are seen jumping out of the river, hoping to catch insects. On some evenings there are organized ghost hunts, so you can find out yourself how much it’s haunted. And there is the Curse of Blarney Castle…

The curse of Blarney Castle

For years, the castle has been receiving packages from all over the world containing stones, pebbles and rocks. Along with these items, there are a thousand apologies from people, who took something from the castle and its premises. People claim even the smallest rock will cause misfortune and bad luck. People have lost their jobs, had accidents and got ill. This resembles Ayers Rock (Uluru) and Bodie. So, don’t take any souvenirs with you when you visit!

Blarney Castle is a wonderful place to visit! Go kiss the Blarney Stone, explore the Badger Caves and don’t forget to wander through the rock garden and the other gardens. There’s even a poison garden, which contains very dangerous plants. Don’t smell, taste or take anything from there, either. What an interesting place!

Do you want to read more stories about haunted castles? Click here!

Larnach Castle is often referred to as New Zealand’s only castle. In fact, the 25-room Gothic building is an historic house, also called a mock castle. It’s located on the ridge of the Otago Peninsula near Dunedin. Larnach Castle has a magnificent view: you can even see the Pacific Ocean from here! But, this was […]
The breathtaking medieval Burg Eltz, or Eltz Castle, can be found in the hills of the German town Wierschem, between Koblenz and Trier. Burg Eltz is one of the few castles in the area that was never destroyed during a siege and it can be visited today. This castle used to be the home of […]