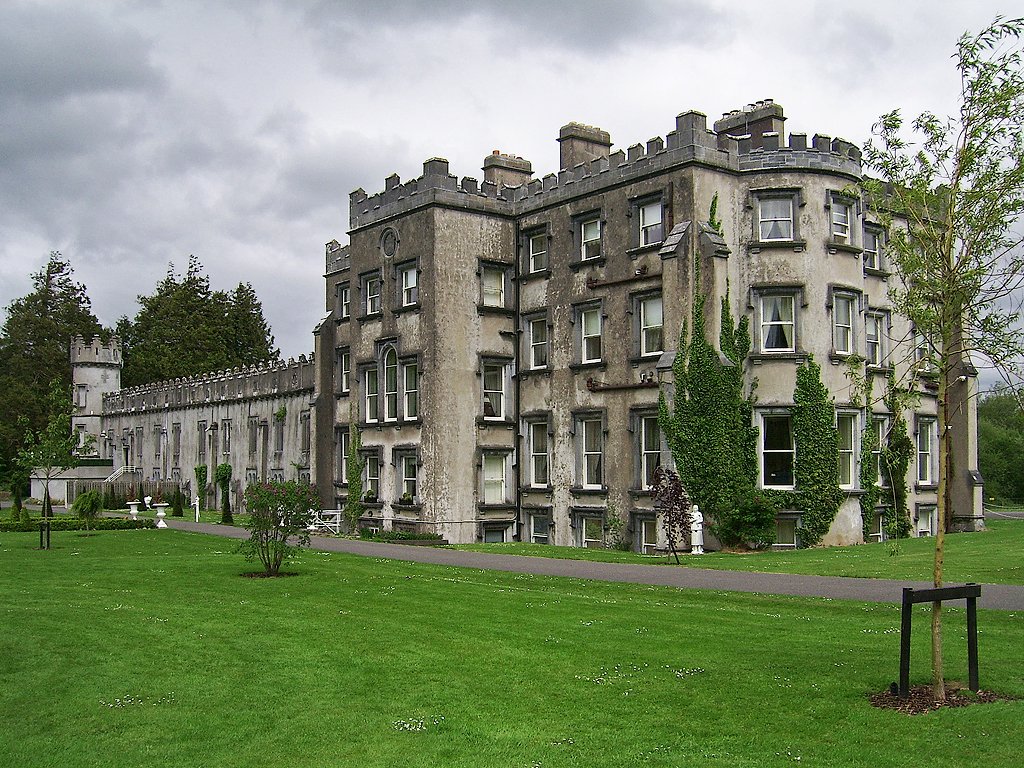 Not far from the Irish coast, near the town of Tralee, you can find a beautiful historic castle named Ballyseede Castle. The castle is surrounded by stories of dread and history. Today, the 4-starred hotel and much-loved wedding venue, looks straight from a fairytale book. And just like in fairy tales, there is a resident ghost.

The history of Ballyseede Castle

Before Ballyseede Castle was built, the 3000 acres (1214 ha) estate belonged to the Fitzgerald family. The Fitzgeralds had the reputation of being quite rebellious, especially against the Crown of England. A feud of 300 years was ended when the 16th Earl of Desmond, Gerald Fitzgerald, was captured in Stacks Mountains and charged for treason to the Crown. He was beheaded November 11, 1583, by the local executioner Daniel Kelly at the Ballyseede demesne.

As a warning to others not to disobey Elizabeth I, his head was displayed in a cage on the London Bridge. The Crown instructed the governor of Kerry to lease the estate to Thomas Blennerhassett of Cumberland in 1590. His descendants resided at the castle until the last of the Blennerhassett’s died in 1965. The annual rent for the estate was 6 pounds and a single red rose from the castle gardens on Midsummer’s day.

The original castle that once stood on the estate fell into disrepair until one William Blennerhassatt built the castle as it is today in 1721. It was even expanded when his successor, Arthur Blennerhassett, inherited the castle. His daughter Hilda was the last Blennerhassett to live at the castle. After her death the castle was auctioned and renovated to become a hotel. Hilda was some woman! She was a trained nurse who served during WWI. She was awarded with the 1914 Mons Star. This medal was usually given to male officers, but Hilda (and a handful of other brave nurses) received the medal for her work in Belgium and France.

Tralee saw much violence during the Irish War of Independence and the Irish Civil War. A few bloody incidents happened close to the castle. In 1922, a man named Jack Galvin was transported to Tralee for killing a pro-treaty officer in Castlemaine. He was among other IRA prisoners when the road right outside the castle was barricaded with lumber. The prisoners were ordered to clear the road, but when they got back inside the vehicle, Jack was missing. A search was put in place, but they didn’t find Jack until the next morning.

A cross now stands on the spot where his body was found. Another bloody incident happened in 1923. Several IRA prisoners were brutally executed right outside the castle gates. They were killed by explosions, which were strapped onto another barricade. But that obviously wasn’t enough, for their remains were machinegunned as well. Right where the execution spot was, now a monument stands. Their restless souls still wander the castle grounds.

The ghosts of Ballyseede Castle

A castle with a long, bloody history like that, is bound to be haunted. And it is. Most of the castle ghosts are friendly. The castle’s proprietors Marnie and Rory did however experience some disturbing poltergeist activity. They were at the castle by themselves one night when they were awoken by a door which was slammed aggressively, and stamping footsteps descending the main stairs. At first, they thought there was a burglar, but when they opened the bedroom door, there was nothing unusual to be seen.

Hotel guests have also experienced hearing and seeing ghostly children at the castle. These children aren’t the usual playful ghosts, but most likely served as servants at the castle. They probably fell victim to the Great Irish Famine, a period in which food was scarce and children were sent off to work. They worked at the kitchen, carrying food to the upper rooms and were responsible for the fireplaces.

The ghost of Hilda

The most famous and common ghost of Ballyseede Castle is the ghost of nurse Hilda. She is said to appear on March 24 each year, but guests and staff have seen her around more often. Hilda is a very friendly ghost who minds her own business most of the time, but people have claimed she spoke to them. Hilda is seen in the upper floor and the main stairs of the castle. Her presence is always announced by the smell of roses. Which is quite unusual because there haven’t been roses in the gardens since her death. She also often appears in the window of her former bedroom, nowadays the Crosby Room. The letters RIP will appear eerily on the window and then vanish as she vanishes.

When you ever get the chance, try spending a night at this fantastic castle. Immerse yourself in the history of it. Take a stroll on the now 30 acres (12 ha) estate and cuddle with the friendly Irish Wolfhounds, mini horses and donkeys. When you’ll walk a little further you might stumble upon the pet cemetery. Perhaps you’ll see the wandering souls of the IRA prisoners and if you’re lucky you’ll see Hilda standing in front of her window, staring at you. Would you dare to spend the night at Ballyseede Castle?