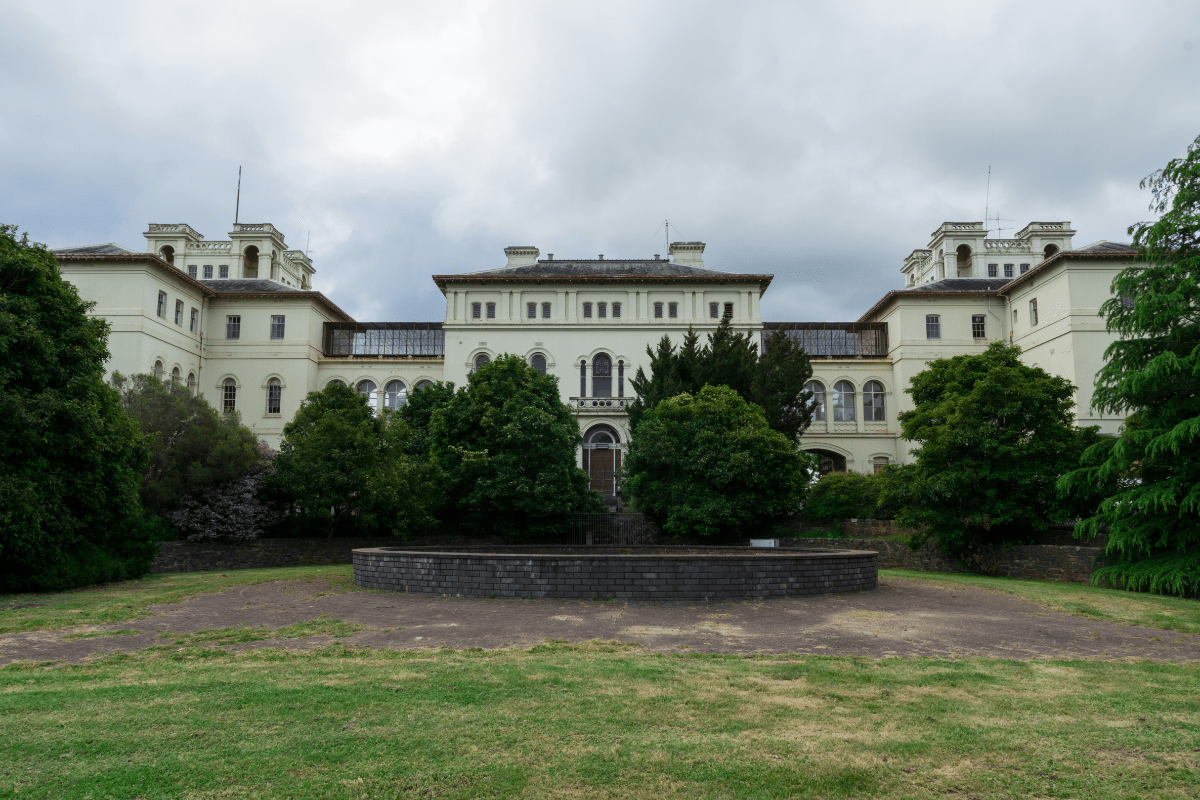 The Aradale Mental hospital, also known by the name Ararat Lunatic Asylum, used to be an Australian psychiatric hospital in Ararat, Victoria. The Aradale Mental Hospital was commissioned along with two other asylums (Kew and Beechworth) to accommodate the growing number of “lunatics” in the colony of Victoria. Some of these lunatics never left.

The history of The Aradale Mental Hospital

When gold was found in Victoria, thousands of immigrants came to look for fortune. Unfortunatley, disappointment was more commonly found than gold. Some even lost their minds over this. Back in the days, insane criminals were placed in normal prisons, where they weren’t given the proper care. The government of Victoria wanted Aradale to relieve the prison system of those thought to be criminally insane, so construction started in 1860. The first “inmates”, as the patients were referred to, were brought to the facility in 1865.

Soon, not only the criminally insane were housed here, but it also became a place for individuals suffering from mental illness. Think about conditions such as post natal depression, epilepsy, autism and Down Syndrome. The Mental Hospital was in operation for nearly 130 years, and it closed its doors in 1993. At its height it housed 1,000 patients and 500 staff members.

The Aradale Mental Hospital was built as a town within a town. It had its own market gardens, orchards, vineyards and a piggery. There were also gallows, a morgue and a graveyard located on site. There was a total of 63 buildings and the courtyards were walled with so-called Ha-ha walls. These kind of walls were used in early Victorian asylums. From the outside, it seemed like a low wall, as not to suggest imprisonment. On the other side, however, a deep trench would make it impossible to escape the brick wall. You can see that pictured up here. Today, Aradale is considered a ghost town.

In December 1886, J Ward, the gaol of the Aradale Mental Hospital was developed. This was the place for people who would normally be detained in jails, reformatories and other places of confinement, but who appeared to be insane.  The most notorious criminals were kept in J Ward. Some of those criminals include Gary Webb, Mark “Chopper” Read and William (Bill) Wallace.

The ghosts of the Aradale Mental Hospital

During the 130 years of operation, over 13,000 inmates, patients and staff members died here. That certainly leaves an emotional mark on a building. Some say Aradale is the most haunted place in Australia. Ghost tours are available and there have been many reports of visitors feeling nauseous, fainting and experiencing sudden pains. Some ghosts of the past like to make themselves known to those who live today.

The ghost of Governor Fiddimont

George Fiddimont was the last Governor of the gaol. In 1886, George was proudly showing a group of people around. He was just coming down the stairs when he suffered a major heart attack. George Fiddimont died at the spot. Tour guides and visitors claim to hear heavy footsteps made by hobnailed boots walking up and down the stairs. But when they check it out, no one is there.

The ghost of Gary Webb

Gary Webb had a long list of criminal activities when he was finally caught and put inside Aradale. He was about to rob a pizza shop when he was spotted by a police man. He shot the police man (who survived) and the woman who owned the shop (who is still in a wheelchair today), but was caught. He was sentenced to prison for 14 years. He was told that when he behaved well, he was able to reduce his sentence. Gary probably didn’t want to leave at all, and started writing letters to the media telling them what horrible things he was planning to do once he got out. The politicians were very worried and a special law was passed to keep him locked up for the rest of his life.

Gary became a self-mutilator at Aradale. He was hospitalized over 70 times after cutting himself. He even cut off his own penis three times! The third time it was too damaged to reattach. Gary still haunts his former room, telling everybody to “get out”!

The office of the Superintendant

Visitors of Aradale who walk past the former office of the Superintendant sometimes taste a bitter taste in their mouth. According to reports, a Superintendant died by suicide here after swallowing prussic acid or hydrogen cyanide. This was probably a man by the name Dr. William L. Mullen, who died in 1912.

The Women’s Ward is haunted by Nurse Kerry. She watches over the tour guides. More ghosts in nurse’s uniforms have been seen throughout the hospital. Some people have experienced a tingling sensation on one side of their head inside a certain room. This certain room used to be the shock therapy ward.

Other ghostly phenomena at Aradale

There’s another room at the J Ward where people suddenly feel ill and unreasonably afraid. Other people slip into a trance-like state which will pass once they are outside. People have reported being pushed and bitten at J Ward, people have heard ticking clocks, methodical bangings on the wall (as if someone is banging their head), and camera’s and other electrical equipment seems to malfunction. The ward is also haunted by three prsioners who were hanged and buried at Aradale. Because they were convicted of murder they weren’t given a Christian burial. Their graves are only marked with three small scratches in the prison wall.

Today, a large part of the former lunatic asylum belongs to Melbourne Polytechnic. They’ve esthablished a campus and a hospitality training facility. There’s also a vineyard, an olive grove and a lavender farm. But, you can also have a tour on site, along with a ghost tour (that is, if Covid-19 finally passes). Would you dare to visit this place?