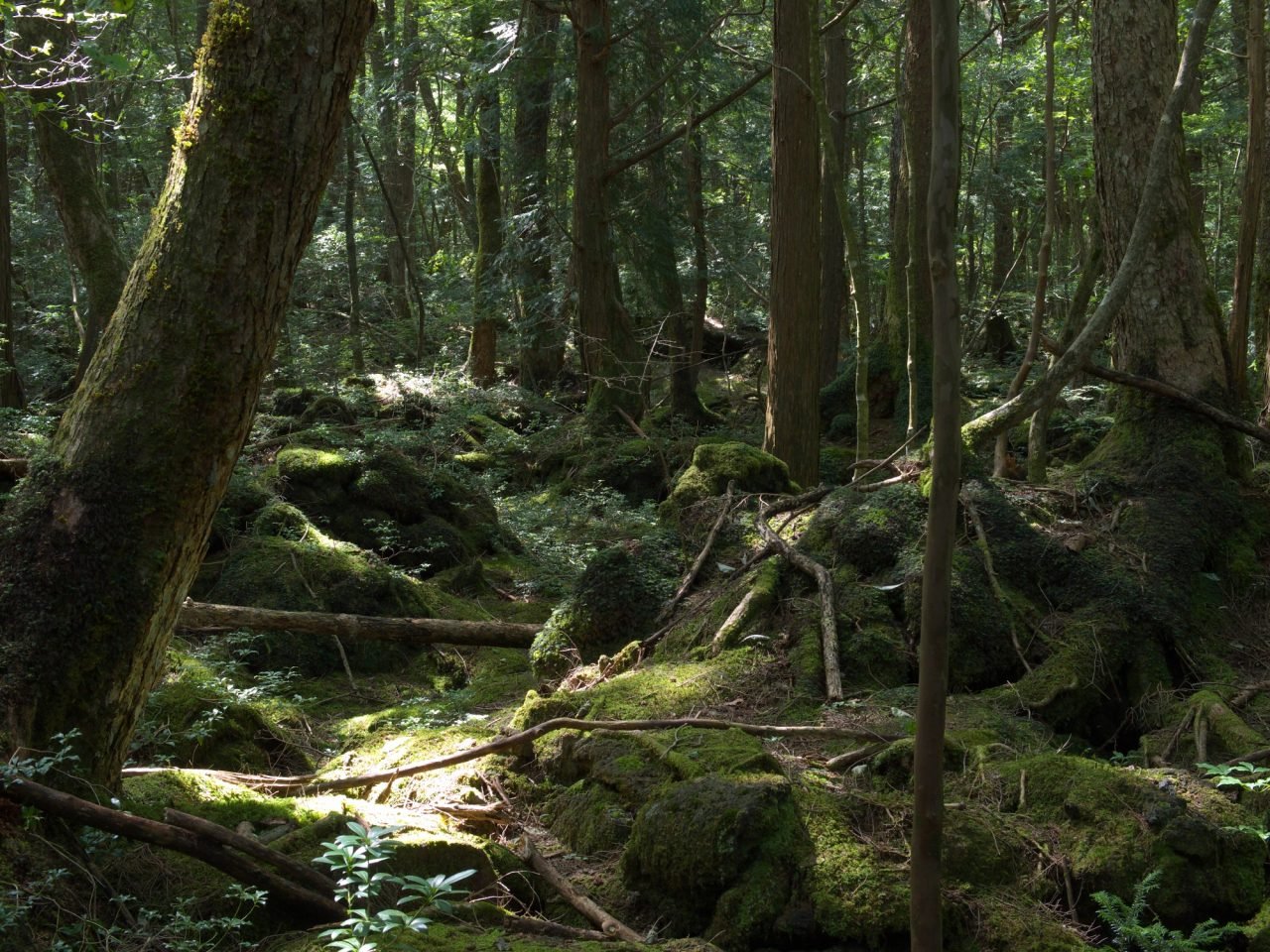 At the foot of the impressive Mount Fuji in Japan, you can find a 90 square mile (35 m²) large forest. This ancient forest not only accommodates stunning ice caves, but also ghosts, monsters and goblins. But there is something else which gives the forest an eerie touch. It is said that the branches of the trees hold more nooses than leaves.

Mount Fuji is a sleeping volcano, so most of the forest soil consists of volcanic rock. These rocks make the ground uneven and difficult to walk on. The tangled tree roots make things even more challenging. And beware of getting stuck in one of the underground caves with your foot. But even worse than any of this is the feeling of complete desolation. The denseness of the forest mutes all sounds. At some parts of the forests, the vegetation is so dense, the wind doesn’t even get through. Animals seem to avoid the forest, so basically all you hear is the sound of your own breathing.

According to some, the soil of Aokigahara covers a magnetic iron base. Devices such as compasses, GPS and mobile phones don’t seem to work here. The chances of getting lost are significant. Some say the malfunction of devices is caused by the demons that live in the forest. Tourists who visit the forest usually don’t go further than a couple of miles. These first few miles are “decorated” with tape and other marking materials. The army has been trying to remove all that stuff for years, but that seems hopeless.

Aokigahara has been associated with death for centuries. The forest was popular for the Ubasute ritual in the 19th century. Literally, this ritual means “leaving”. When food was scarce, sons carried their elderly parents to the forest on their backs. They would leave them behind without any food or water. This barbaric form of euthanasia is put off by Japan as a folklore, but many believe there’s a truth in these horrible stories. That might explain the amount of Yurei in the forest. These are evil spirits who want to take revenge on those who did them wrong. They are also tormenting people who visit the forest, luring those who are sad and lost off the path.

Suicide has always been an honorable deed in Japan. The Samurai performed their ritual Seppuku, also known as hara-kiri, when things went the wrong way. In this ritual, the Samurai slit his own stomach open with his razor-sharp knife without giving a single kick. After that, when the Samurai was still able to, he would stab his heart with the same knife. Nowadays this tradition is luckily no longer applied, but suicide is still seen as a way of controlling your own life.

Japan’s suicide number is the highest of the entire world. The people of Japan lead a more stressful life compared to other countries. The Japanese society demands a lot from its people. Losing ones job for instance, is one of the main causes for suicide. Most suicides occur in March, at the end of the Japans fiscal year. Hangings and drug overdoses are the most popular ways to go.

The large number of suicides at Aokigahara could be blamed on the novel “Kuroi Jukai” (The black sea of trees) by Seicho Matsumoto. In this novel, two lovers commit suicide in this particular forest. But, even before this novel was publiched, Aokigahara was a popular suicide place. Another Japanese best-seller “The Complete Suicide Manual” refers to Aokigahara as “the best place to die”. Ever since 1970, seach parties are organised by the police and volunteers to recover bodies from the dence forest.

Camping in the forest is against the law: people who bring a tent are usually people who are having thoughts about killing themselves. The police and volunteers always try to talk people out of their desperate action. A nearby coffeeshop does the same thing. The owner has seen many types of people entering the forest and senses what people are up to. He takes them into his shop and talks to them, sometimes with success.

Japanese warning signs are spread throughout the forest to try to persuade people to get help. Most of the warning signs have messages like: “think about your children” and “your parents gave you life”. The Japanese government tries to reduce the numbers of suicide by 20%. In 1998, 73 people committed suicide, but this record was broken in 2002 by 78. In 2003 no less than 105 people took their own life. Due to the financial crisis of 2008, the suicide numbers in 2009 were even higher. The Japanese Government wants to change the reputation of the forest and turn it into a tourist attraction rather than a suicide forest.

If you stay on the tracks, you can visit Aokigahara without getting lost. If you do tend to wander off, you might get lost or stumble upon a (perhaps not so) fresh corpse. Nonetheless, it’s worth your time to go. You can visit the Windcave (Fugako) and the Icecave (Narusawa). From the forest you also have an amazing view on Mount Fuji.

Aokigahara in the media

It won’t surprise you that this forest attracts people. Many books have been written about it and movies, like anime and manga movies, comics, games and music have been made on the subject. In 2016, a horror movie named “The Forest” was made. If I ever get the chance to visit Japan, Aokigahara will be on my list for sure. If only for the amazing view and the caves. Would you dare to visit it?

Do you want to read more stories of haunted places in Asia? Click here!