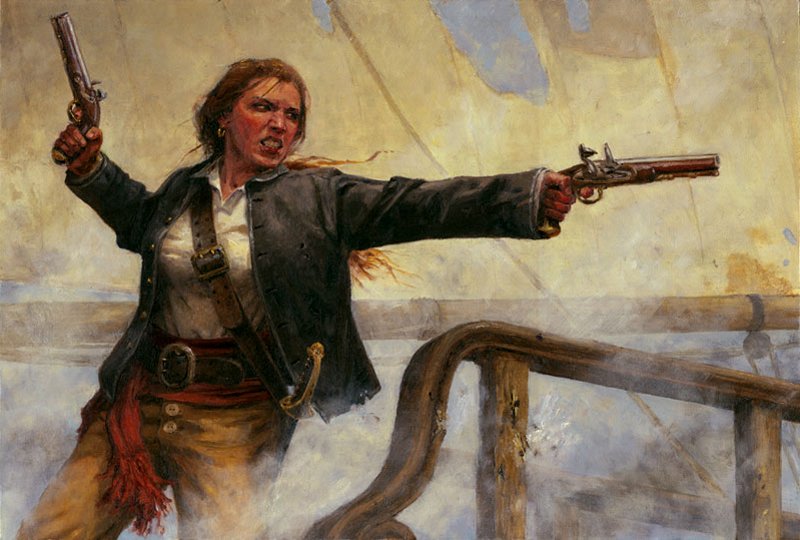 One of the 15 dining rooms at The Pirate’s House in Savannah, Georgia, is dedicated to a woman named Anne Bonny. A large painting of the female pirate decorates this room. Even though Anne never visited the Pirate’s House nor did she die here, her story is an interesting one. Let’s have a closer look to one of the few female pirates that ever sailed the seas.

Anne Bonny was born Anne Cormac in Cork, Ireland in 1698. She was the bastard daughter of lawyer William Cormac and his maid Mary Brennan. William tried to hide Anne in dressing her as a boy and educating her to become a clerk. When William’s wife discovered the affair and Anne, she wanted a divorce and William, Mary and Anne moved to Charleston, USA, where he started his own plantation. William found his daughter a suitable husband, but Anne wanted to marry a man named John Bonny. Her father was furious and sent Anne away.

A few months after her marriage, Anne started having second guesses. Her husband wasn’t what she wanted in a man and she fell in love with a man named John Rackham, alias Calico Jack. Rackham even offered her husband money for a dicorse, but John Bonny refused. Instead, Anne was accepted on board Rackham’s ship. Anne proved very skilled at handling the sword and gun and she became one of the pirates. One day, her eye caught another pirate who was just as skilled as she was. When she approached him she noticed that this was a woman as well. Mary Read and Anne Bonny quickly became friends which irritated Rackham, who still thought Read was a man.

When Rackham discovered this pirate was a woman, he also accepted Mary Read as a pirate on board. After many successful raids, Rackham and his crew were arrested in 1720. Anne and Mary were the only ones who defended themselves because the men were all drunk and passed out when arrested. They were taken to Jamaica where all the men were hanged. Anne’s final words to John Rackman were: “had you fought like a man, you need not have been hang’d like a dog”. Anne and Mary were both pardoned because they were pregnant, probably both by Rackham. Mary Read died in prison a year later, but what happened to Anne Bonny is still a mystery. Who knows, perhaps Anne’s descendants still live today.

In 2020, Anne Bonny and Mary Read were given a statue at Execution Dock in Wapping, London. This statue will eventually be brought to Burgh Island in south Devon where the two brave women will be honered.