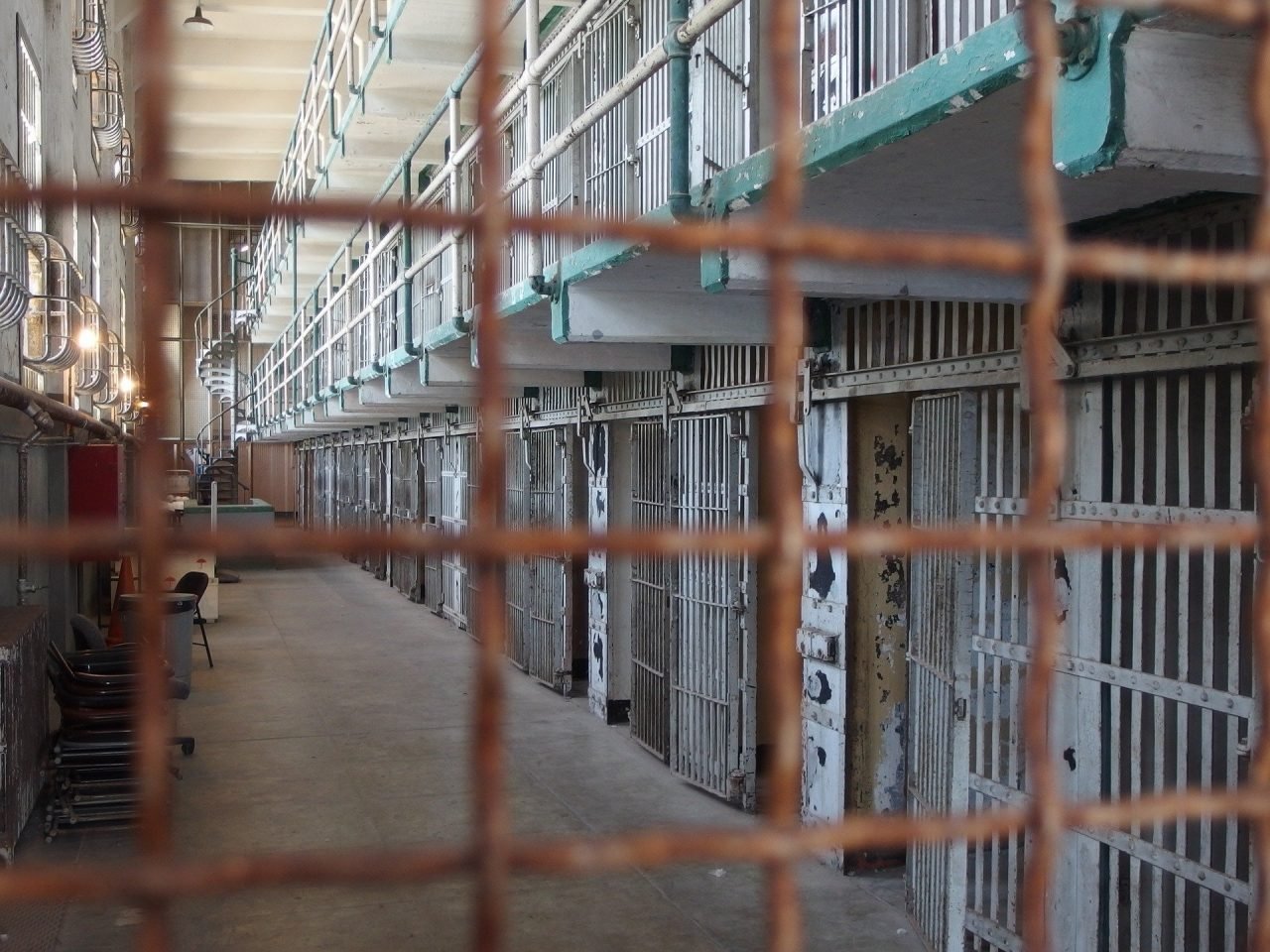 Alcatraz is an island just outside the coast of San Francisco. The island has been nicknamed “The Rock” and has the oldest, still working lighthouse (constructed in 1846) of western USA on it. But that’s not where it’s famous for. The notorious prison on the island once housed the most infamous bad guys in history. And some of them never left.

The history of Alcatraz

The island Alcatraz was discovered in 1775 by a Spanish explorer by the name of Juan Manuel de Ayala. He named the island “la Isla de los Alcatraces”, which means the Island of the Pelicans. In 1850, a military fortress was built on the island during the aftermath of the Mexican-American war. When the Civil War broke out, the island was equipped with 85 canons. These canons were never used, but prisoners of war were imprisoned here.

Between 1870 and 1876, the fortress was modernized, and several plans were made for it. These plans weren’t executed until 1907, when it was turned into a military prison. In 1933, Alcatraz was turned into a maximum-security federal prison. The facility had 336 “main line” cells and 42 “solitary confinement” cells. The prison was never completely full. There was an average of 260 convicts. At its peak, 302 convicts were housed at Alcatraz. The remoteness of the prison along with the strong current made escaping the island nearly impossible.

The prisoners of Alcatraz

A total of 1545 prisoners have called Alcatraz their temporary home. Prisoners were only sent to Alcatraz from other prisons after they had shown bad behavior. Alcastraz was never used for capital punishments. There were simply no facilities for that. If a convict was to be sentenced to death, he was sent to the San Quintin State Penitentiary to be executed in the gas chamber. But prisoners did die here. And some of these murdered men have never left.

Among the prisoners were Robert Franklin Stroud, Alvin Karpis, George “Machine Gun” Kelly, Arthur “Doc” Barker and mob boss Al “Scarface” Capone. Prisoners couldn’t “buy” privileges in Alcatraz. In the beginning, even speaking to each other was prohibited. Al Capone stayed at Alcatraz for 4,5 years after being transferred from the Atlanta Federal Penitentiary. He arrived August 22, 1934. Capone had several jobs, such as sweeping the cellhouse floor and working in the laundry. He was not popular at Alcatraz and had no special privileges. He was often targeted by other convicts because of his reputation and was even stabbed once with a pair of shears. He was transferred to another facility in California after he showed signs of syphilis. He served the remaining years of his 11 year-sentence there.

Of course, prisoners tried to escape the island. Several attempts were made, but only one was (probably) successful. This famous escape was in 1962, which is also known as “the Great Escape”. This escape was very well planned. Frank Morris and the two brothers John and Clarence Anglin made three heads with saved pieces of soap. That way their absence wouldn’t be noticed before they were gone. They made a raft with clued together raincoats. Eventually they made it off the island. No trace was ever found of these men. They might as well have drowned, but their bodies were never found. They did inspire the makers of the in 1979 released movie “Escape from Alcatraz”.

In 2013, a letter was sent to the San Fransisco Police Department. The sender of the letter claimed to be John Anglin. He declared to have escaped Alcatraz with his brother Clarence and friend Frank Morris in 1962. In the letter he said he was 83 years old and dying of cancer. The authenticity of the letter was never confirmed, but the case was re-opened anyway.

Another 36 prisoners tried to get off the island in 14 attempts. Twenty-five of them were arrested again, 6 were killed by bullets and 2 have drowned. The most violent escape, the escape of May 2, 1946, led to the Battle of Alcatraz. It lasted for two days and three prisoners and one guard were killed. The army eventually bombed the place and entered the prison heavily armed. The three killed prisoners were all killed in the engine room where they were hiding.

Alcatraz after it was closed

Alcatraz was officially closed March 21, 1964. In 1969, the island was occupied by a group of Indians for two years, who wanted to turn it into a cultural center. But federal agents removed them in June 1971, because the Indians trashed the entire island. Since 1972, Alcatraz is turned into a National Park and since 1973 visitors are allowed here.

In 2003, the escape of Frank Morris and the two brothers was reconstructed by the program Myth Busters. It turned out that escaping the way they did was indeed possible. Illusionist David Copperfield also escaped the prison as part of a trick. A paranormal show called Ghost Lab brought something completely different to light; the place is loaded with ghosts.

The ghosts of Alcatraz

Prisoners, guards and visitors; they all have stories to tell about the place. Some prisoners were declared mentally ill after they told their paranormal experiences. Author Mark Twain described Alcatraz after his visit as “Being as cold as Winter, even in Summer”. Cold spots, whispers in the cells, shadow figures and complete apparitions, it’s all there. Some people have experienced being locked into one of the cells during a tour when nobody was around. Indians claim the island was evil even before the prison was built. They used the island to bury Indian criminals. Lots of malevolent spirits are said to linger here. Archeologists have indeed found bones in the island grounds.

Visitors can be overwhelmed by the feeling of desperation, but also of intense anger. Especially in the engine room, where the three hiding prisoners were killed during the Battle of Alcatraz in 1946. Most guards didn’t take the haunted stories seriously, but they do now. They also feel the cold spots and feel cold fingers in their necks when nobody is behind them. Crying can be heard from empty cell blocks, sometimes throughout the entire night. Guards claim to have seen ghosts from the time Alcatraz was a military prison and some say they have seen the spirit of an Indian who draws a circle and then disappears. In the director’s office, that has been burned down during the Indian occupation, a man in a grey suit is often seen. When he disappears the room-temperature turns ice cold.

In cell blocks A and B, footsteps and moaning are heard frequently. These cell blocks housed the lighter criminals. Also, crying is heard from here and there are many cold spots. Cell block C is dominated by the ghost of Abie Maldowitz, aka “The Butcher”. He was an assassin for the mob and was killed in the laundry room. He has been seen, but mostly heard. He likes slamming the heavy cell-doors at night. Block D is insanely haunted. This used to be the punishment block. There are Strip-cells and Hole-cells there. The Strip-cells are made of steal and when sent here the prisoner had to take off all his clothes. He had to stay in the freezing cell in complete darkness and isolation. The Hole-cells were similar but with a certain dampness added to them.

Especially Hole-cell 14D is notorious. Even when it’s extremely hot outside, this one remains ice cold. Visitors don’t like staying here for long, it’s gives them a feeling of dread. One of the prisoners who was locked in here freaked out and told the guards that he saw two glowing red eyes in his cell. The guards ignored his frantic complaints. The man screamed all night in complete terror but suddenly the screams stopped. The guards found him dead, with a purple face and bulging eyes. There were strangulation marks on his neck, caused by a pair of hands. Autopsy showed it was impossible for him to have strangled himself. But… he was there alone, right?

Alcatraz, do you dare to visit?

All these stories draw many people to this place, but it’s worth a visit even if you don’t believe in the paranormal. Al Capone was deeply impressed by his stay at Alcatraz. He claimed he was never scared before he stayed at Alcatraz. But did he fear the living or the dead?