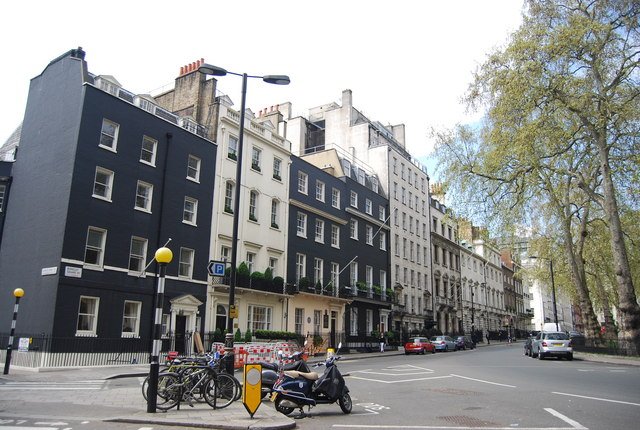 It’s probably one of the most haunted houses in London: 50 Berkeley Square. At least, that’s what people have said about the place for centuries. The 18th century townhouse in Mayfair has had many residents including Prime Minister George Canning. So, what makes this particular house so haunted? What happened here and most importantly, are the stories true?

The history of 50 Berkeley Square

The Mayfair townhouse was constructed in 1750 and it still stands tall. Although there was a time in which it was very neglected. Luckily, 50 Berkeley Square was renovated. The floor storey house is painted in dark blue (near black) color and is currently owned by Maggs Bros. booksellers. The house was designed by architect William Kent who was also a famous landscape architect. Prime Minister George Canning lived at the house from 1770 until his death in 1827. Following Canning, the house was owned by the Honorable (Hon) Elizabeth Curzon who also lived in the house until she died aged 91 in 1859. The ghost stories started to come to light around 1840) when she lived there.

When Miss Curzon died, the house was bought by a strange man named Thomas Myers. He had just been rejected by his fiancée and went a little mad after that. His nocturnal behaviour increased the tales of the supernatural. Myers hardly ever left the house, he slept during the day and lived in the night. During his nightly walks inside his house he made strange sounds and noises which scared neighbours and casual passers-by. When Myers stopped paying his taxes in 1773, a tax-agent paid the house a visit. By seeing the state of the house, he decided not to levy more taxes on the house. Meyers died the following year and the house was left to his sister. But due to the neglect and the level of disrepair the house was in, she decided to stay at her own comfortable house. 50 Berkeley Square was left abandoned until 1884.

Since 50 Berkeley Square was rumoured to be haunted AND abandoned after Myers’ death, the house became a magnet to people. The attic room was a terrible place, according to many. There are several stories about this place, depending on who tells the tale, but one thing always returns: the fact that the attic is haunted by a young woman. This young woman committed suicide by jumping from the window when she tried to escape her abusive uncle. She appears as a brown mist and has scared several people, literally, to death. Another legend claims a young man was locked up in the attic room. He was fed through a hole in the door until he finally went mad. His spirit is said to haunt the attic. And the attic is said to be haunted by a little girl in a Scottish kilt.

The house was well known for its hauntings and when it was left vacant, many placed bets to spend a night at the house. Lord Lyttleton was challenged as well. When he spent a night at the house he brought a gun, just to be sure. Sometime that night, he was allarmed by brown smoke that appeared in the room. He fired his gun at the smoke and the next morning when he went to check the gun’s cartridges were nowhere to be found.

In 1879, a maid also stayed overnight at 50 Berkeley Street. When they found her the next morning she had become completely insane. She died the following day in an insane asylum. Two sailors from the HMS Penelope were also challenged to stay there for the night. By morning, one of them was found dead. He had probably tripped as he ran from the house. The other saylor claimed they were attacked by the aggressive ghost of Thomas Myers.

Is there any truth in the ghost stories?

After the house was renovated, the new occupants lived peacefully at 50 Berkeley Square. There have been no paranormal claims after 1887. Did the spirits simply disappear? Or are the house’s ghosts a product of Victorian novelists? Back in the Victorian era, ghost stories were very popular. Even newspapers reported about ghosts and haunted places. Death and the afterlife were pretty common back then and a great source of entertainment. However, the house was named in Peter Underwood’s book “Haunted London” in 1975. It even appeared as a venue for a Charles Dickens’ Ghost Club Mission in the Assassin’s Creed Syndicate video game. Is 50 Berkeley Square indeed haunted? What do you think?